Knicks Rusty in First Game Back, Lose in Blowout Fashion to Bucks 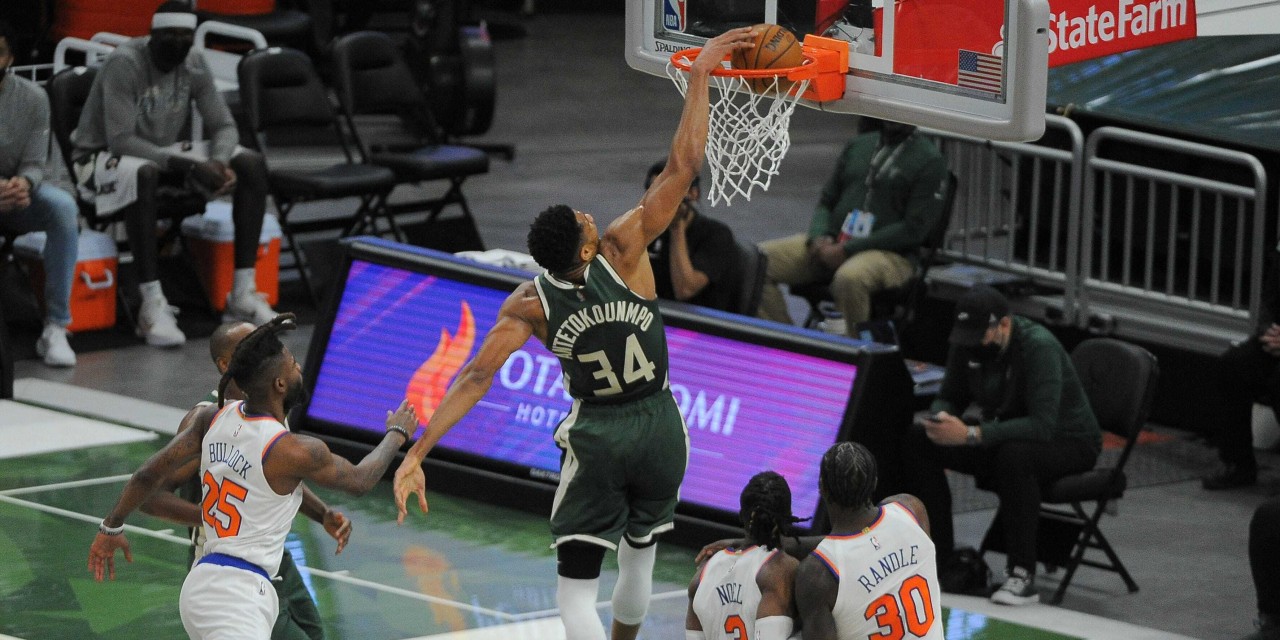 The Knicks were overwhelmed and overmatched by All-Star Game MVP Giannis Antetokounmpo and the Bucks in the first game of the second half of the season.

The Milwaukee Bucks (23-14) defeated the New York Knicks (19-19) by a final score of 134-101. For Milwaukee, Giannis Antetokounmpo finished with a triple-double: 24 points, 10 rebounds, and 10 assists, while Bryn Forbes finished with 21 points and seven made threes. For the Knicks, R.J. Barrett finished with 22 points and five rebounds, while Alec Burks chipped in 17 points and eight assists off the bench.

The New York Knicks. Oh, how I missed thee.

In the team’s first game out of the All-Star break, the Knicks hosted one of the best teams in the Eastern Conference in Milwaukee. Both teams were rested and ready to go. Barrett got busy early; a quick ferocious dunk right down the lane, a nice made jumper, and an excellent find to Nerlens Noel for an easy oop to start off for the Knicks.

RJ BARRETT WITH THE HESI AND THE BAPTISM!!!

For the rest of the half, however, it was all Milwaukee. New York made sure to keep Giannis in front of them, even throwing shades and doubles at him, but his passing sliced through New York’s defense. Antetokounmpo would drive to the basket, find the open man, and as soon as the Knicks would just, the Bucks would make the next pass to an available shooter. Instead of Giannis killing them, the likes of Brook Lopez and Donte DiVincenzo found themselves the benefactors of easy, wide-open looks.

Milwaukee went into the half up 17 points for a multitude of reasons. While the Bucks found themselves with tough shots in the paint, they continued to get to the rim for finishes. The Bucks also owned the rebounding advantage 27 to 16—neutralizing any and every chance for the Knicks. Finally, Julius Randle was effectively knocked out of the game, ending the first half with just three points, four rebounds, and two assists on 1-of-8 shooting. When you can stop Randle and grab every rebound to limit second-chance scoring, the Knicks are in trouble.

I would hate to call the second half cardio, but the Bucks continued to keep the pressure on the Knicks, so the made baskets from New York were followed by a made basket by Milwaukee. We got some nice Barrett possessions, but we also got some of the same issues that plagued the Knicks—more on that in the game notes. Randle continued to have a poor game; although he did throw some impressive passes. While everyone on the Bucks seemed to get good looks, I found Khris Middleton to be especially aggressive in abusing New York’s defense.

The fourth quarter was both teams playing out the clock. Milwaukee waited a bit before emptying the bench, while the Knicks largely leaned on their second unit. Both Obi Toppin and Immanuel Quickley led the charge with a nice Kevin Knox cameo as well. Both rookies looked to get a bit of a groove going as they head into their next game—with Toppin getting some easy looks and Quickley pushing the ball forward and looking for his shooting stroke again. Taj Gibson got upset as the lack of defense and the Knicks went quietly into the night and the Bucks got revenge on the Knicks from earlier in the year.

Let’s jump into the game notes.