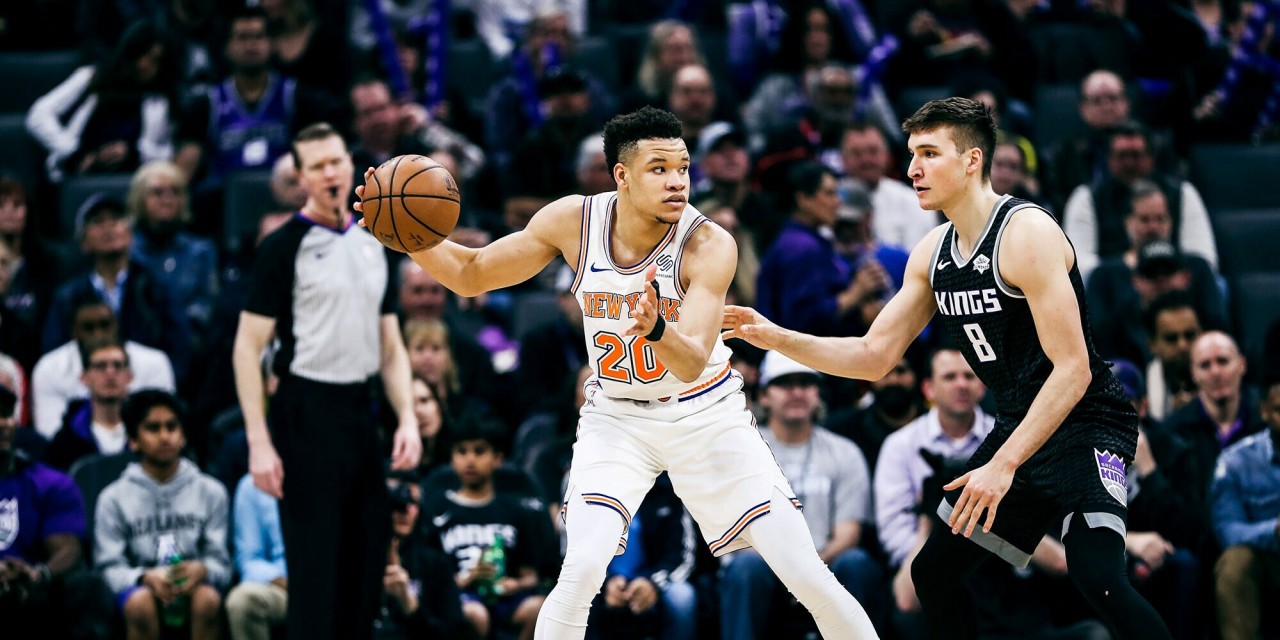 With a back-breaking loss in Boston in the rear view mirror, the Knicks host the Kings—who have the same record as them—on Sunday.

Despite the Friday night defeat at the hands of the Boston Celtics, the New York Knicks feel on the way up. A Jayson Tatum fadeaway game-winner couldn’t take away a strong performance from Marcus Morris—steps forward in solidifying the rotation and the overall progress of the young kids on the roster. It was a loss, but one where progress was made.

Can the Knicks continue to keep up the good vibes? We’ll see as they host the Sacramento Kings.

After finishing ninth in the Western Conference last season, it felt like Sacramento had some momentum on their side heading into the 2019–20 season. Then, they fired Dave Joerger and replaced him with Luke Walton. The result was changing from a frenetic pace, led by De’Aaron Fox, to the 26th-ranked team in pace and a 1-5 record to start the show.

Their biggest issue is the offense, currently 28th in the league in efficiency. Fox, despite a slow start, is a lethal guard when out in transition. Buddy Hield, who eared a max contract this summer, is averaging 8.8 three-point attempts a game and hitting 35.8% of them. Those two will carry an offense that has better players than their current record suggests.

This is also a team with several talented big men. Dewayne Dedmon is a fine defensive center who can shoot, while Richaun Holmes is an explosive rim runner. Marvin Bagley, the second overall pick in the 2019 NBA Draft, is an elite athlete, whose offense is ahead of his defense, while Nemanja Bjelica is a crafty power forward who fills multiple roles.

The Need to Know

According to the Knicks, Mitchell Robinson is dealing with a sprained ring finger and will have a splint on. New York will need Robinson’s rebounding and defense against Sacramento’s wave of big men. However, Fizdale may assess his performance early and adjust his rotation based on Robinson’s early play.

That could result in more minutes for Taj Gibson, who received a DNP-CD against Boston on Friday. Fizdale went with just eight players against the Celtics, but if Robinson sees his minutes capped, Gibson is a prime candidate to get minutes and provide defense in the frontcourt.

What to Watch: Frank Ntilikina starting against De’Aaron Fox

Asked Fizdale if he would start Frank Ntilikina again tomorrow night vs. Sacramento and De'Aaron Fox: "Absolutely. Frank is really playing good basketball for us. Just really proud of the way that he stayed with it and his confidence in growing every day."

Since Ntilikina’s move into the starting lineup, New York has looked good—and more importantly, Ntilikina’s confidence has taken a step forward. From an 0-for-6 performance against Chicago to knocking down two three-pointers against Boston, Ntilikina has seen progress in his overall game and the goal is for him to continue this play.

The key will be Ntilikina’s play against Fox. The defensive side of the ball is where Ntilikina can win, keeping Fox off balance by blowing up pick-and-rolls and stifling their halfcourt sets. As evidenced by his three steals, Frank can also diagnose the opponent’s movements and play the passing lanes.

Offensively, Ntilikina will be tested against Fox, who’s one of the better defensive point guards in the league. This is a perfect game for both Frank and R.J. Barrett to share creation responsibilities to keep Fox and the Sacramento defense off balance.

It’s another game in the 2019–20 season, but it’s another game for New York’s youth to put together a good performance. All of New York’s young guys—Ntilikina, Barrett, Kevin Knox, and Robinson—have flashed various skills this season. The hope is that moving forward, the flashes become constants.

With a team like Sacramento coming to town, New York could find themselves building positive momentum for their youth and picking up another win before a brief two-game road trip.

The Knicks take on the Sacramento Kings in New York at 6 p.m. EST. Catch it on MSG Network.

Fizdale will start Bobby Portis at center instead of Mitchell Robinson, per NorthJersey’s Chris Iseman.

Bobby Portis replacing Mitchell Robinson in the starting lineup. Fizdale wants to see if it can open up the floor for Randle

»READ: Could RJ Barrett be the answer at point guard?