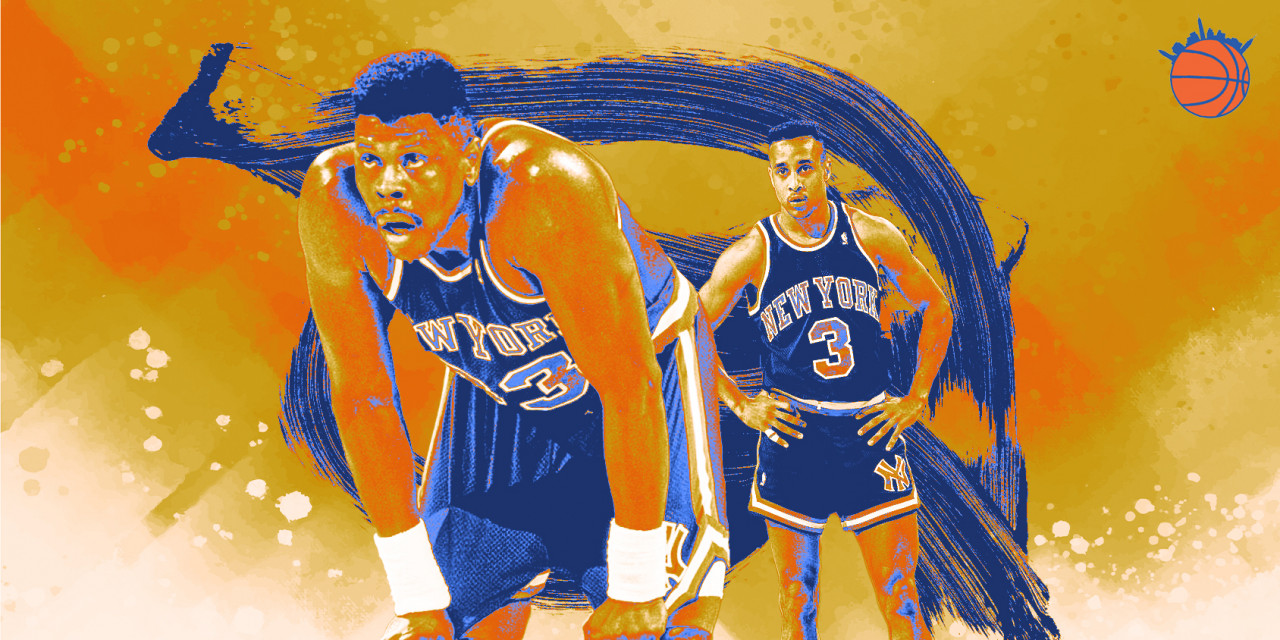 The 1993–94 squad gets more shine, but this may have been Pat Riley’s best Knicks team. And that was despite some preseason trades that didn’t go as planned.

The plan was to beat Michael Jordan and the Chicago Bulls. That was the priority.

WHERE THE FRANCHISE WAS AT

The 1991–92 Knicks, in the first season under Pat Riley—and boosted by the additions of Anthony Mason and All-Star Xavier McDaniel—won 51 games, established a historically rugged brand of play, ended the Bad Boys run, and took their place as the Bulls’ no. 1 rival in the Eastern Conference. Yet, they fell to Chicago in seven games in the second round.

That summer, with Patrick Ewing hitting 30, Knicks GM Ernie Grunfeld was eager to kick it up a notch. He wanted to add more perimeter shooting, frontcourt depth, and veteran leadership. So, he made a slew of bold offseason moves.

He acquired four-time All-Star shooting guard Rolando Blackman for the Dallas Mavericks. Blackman, an 11-year vet, averaged 18.3 points per game for a 22-win Mavs group the year before.

The Knicks sent a second-round pick to the Minnesota Timberwolves in exchange for Tony Campbell, a finesse 4. Campbell had averaged 20.6 points per game over three seasons with the expansion T-Wolves—the worst team in the league. By the end of ’92, Campbell had lost his starting gig to Doug West.

“With the offseason additions of Rolando Blackman, Hubert Davis, and now Tony Campbell, we are a stronger club than we were a year ago, particularly from the perimeter,” exclaimed Knicks president David Checketts.

The Knicks signed Herb Williams, who would serve as Ewing’s backup for the next seven seasons.

In September, the Knicks executed a major three-team trade with the Los Angeles Clippers and Orlando Magic, sending Charles Smith (also a finesse 4—which will be a problem later on), experienced combo guard Doc Rivers, and 2 guard Bo Kimble to New York.

In return, the Knicks sent Jackson and a second-round pick to L.A. and a 1993 first-round pick to Orlando. (The Magic traded Stanley Roberts to the Clips for a first-round pick.) Jackson, an NYC legend and locker room leader, was coming off a strong campaign of his career (11.8 PPG, 8.6 APG, 81 starts). His exit was painful, and point guard duties now fell to Rivers and sophomore Greg Anthony.

The Knicks were forced to renounce the rights to Gerald Wilkins, an admirable staple on the wing for eight seasons. Kiki VanDeWeghe signed with the Clippers.

Grunfeld’s aggressiveness initially sparked excitement, if trepidation, but the collateral damage was substantial. Beyond the losses of key cogs in Jackson and Wilkins, the Knicks opted not to retain McDaniel—who had thoroughly outplayed Scottie Pippen in the ’92 playoffs and generally pushed everybody around.

The Knicks had the requisite cap space but placed his re-signing on the back-burner as they made other moves. Understandably, X didn’t feel like waiting, and he signed with the Boston Celtics. In theory, Smith was expected to fill the void in the frontcourt, though he was coming off a season of knee woes and wasn’t the same type of aggressor.

“My knee is fine,” said Smith preseason. “We can definitely be considered a contender in the East. I can score. Patrick Ewing can score. Rolando Blackman can score. Tony Campbell can score, and we have a lot of weapons.” Uh-huh.

Shockingly, the Knicks’ re-tooling via players from lottery teams did not intimidate the Bulls. In an all-time quote, Phil Jackson said the Knicks had traded for players “with an accumulation of failure.”

Among everything else, the Knicks also updated the “Classic Roundball Logo,” changing the font and adding the silver triangle in the background.

Besides the coaching and defense, the best trait of the 1992–93 Knicks was that the majority of the roster was priming. Their most experienced players were Williams and Blackman (11 years in). Here are the years of service of their best players: Ewing (nine), Charles Oakley (seven), Anthony Mason (three), John Starks (three), Rivers (nine), and Smith (four).

Despite the shake-ups, the Knicks largely retained their identity, thanks to invaluable tone-setters like Mason (10.3 PPG, 7.9 RPG) and Oakley (6.9 PPG, 8.6 RPG). Starks went from full-time backup to mostly starter, increasing his scoring to 17.5 points per game. His feisty, underdog mentality was as valuable as anything.

After a rocky 4-4 start, the Knicks won 30 of 42 games heading into the All-Star break, thanks to their elite defense. By contrast, the offense was, to be charitable, stagnant. Mostly, it consisted of Ewing surrounded by players who couldn’t space the floor and/or were playing out of position. Losing Wilkins and VanDeWeghe hurt, and Grunfeld’s move didn’t actually improve the perimeter play. I know it was a different time, but their three-point numbers are unflattering and low-volume.

Overall, the Knicks were not just defense-first, they were defense-only. New York led the NBA in opponent points per game (95.4) and Defensive Rating, which made up for their fourth-lowest scoring offense and fifth-slowest pace. They ranked no. 1 in opponent shots made, opponent field goal percentage, opponent three-point percentage, and opponent assists. They were beasts on the glass in general (as you’d expect with that frontcourt), finishing second in offensive rebounds and third in total boards.

This was a dream Thibs group. In more ways than one, they resembled the 2020–21 squad. They were a real contender (unlike 2020–21), but their 60-win mark was as much of a reflection on their night-to-night lockdown effort, as much as putting the ball in the basket. Remember, front offices out there (including a certain New York baseball club): culture and identity are important.

This was peak Madison Square Garden, too. The Knicks finished with a 37-4 record at home—the best single-season MSG record in franchise history.

Pat Riley was recognized with his second Coach of the Year award (amazing he only got one with Showtime). Ewing earned All-NBA Second Team honors after putting up 24.2 points, 12.1 rebounds, and 2.0 blocks per game.

As for those offseason pickups. Turns out, the vibe in New York was a bit different than the early-’90s T-Wolves, Clippers, and Mavs.

Nevertheless, In March, the team achieved their longest winning streak of the season (nine), and they played their best ball down the stretch, winning 24 of their final 28 games, earning the top-seed in hoops.

The Knicks needed just nine games to roll into their first Eastern Conference Finals in 19 years, dispatching the Indiana Pacers and Charlotte Hornets on the way. From the All-Star Game to the Conference Finals, the Knicks won 33 of 39 ballgames.

But let’s be real. This entire season was, truly, about one thing: Michael Jordan.

The Knicks won the season series over the Bulls, though one game came after Jordan was suspended (for fighting Reggie Miller, of course), and another came late in the schedule when the Bulls were saving up for the playoffs and the Knicks were going all-out for the no. 1 seed.

Initially, the Knicks capitalized on the home-court advantage.

In Game 1, John Starks put forth perhaps the finest performances of his career. He scored 25 points (five threes) and held Jordan to 10-of-27 shooting, including 2-of-9 in the fourth quarter.

“I don’t even remember when Starks was in the C.B.A., and I don’t remember when he first came into the league,” said Jordan, referring to the Continental Basketball Association. “But I know he’s here now.”

The Knicks dominated the glass for a 98-90 win. (Can you imagine how loud the Garden must’ve been?)

Speaking of Starks, two days later, Riley’s group held their ground as Starks took to the skies. In the final minute, after a furious late rally from the two-time defending champions, Starks went baseline for…well, you know.

Starks held Jordan to another inefficient night, and the Knicks won 96-91 win. Oakley, the former Bull, was the most impactful player on the court, putting up 14 points and 16 rebounds.

The turns tabled in Game 3, when the Bulls’ supporting cast—superior to the Knicks, no thanks to Grunfeld’s summer moves—led Chicago to a 20-point victory, despite a 3-of-18 shooting night for MJ. (The Knicks were not capable of this kind of win, should Ewing have had a similarly abysmal outing.)

In Game 4, Jordan more than made up for it. He dropped a cool 54 points on the best defense in basketball with the season on the line. Those point guards they relied on? The ones not named Mark Jackson? Two total points.

You probably know this low-light, too: Smith missed four layups in the closing moments in a back-breaking loss that flipped the series.

After getting a feed in the lane from Ewing (33 points), Smith first had a shot blocked by Horace Grant, then another stripped by Jordan, then two more blocked by Pippen. (I think I can hear some folks at the bodega across the street still arguing that he was fouled.)

“I’m tired of talking about fouls and officiating,” Smith said after the game. “You watch the film and you be the judge. I wouldn’t have done anything differently.”

Of course, it’s not all on Smith. Everybody besides Ewing and Mason was awful. The Knicks shot 20-of-35 from the free throw line. They were even outrebounded, a rarity (Rivers did nearly knock Jordan out of the game by kneeing him on a charging foul in the third quarter. Jordan grimaced on the ground for a minute then hit three straight jumpers). Oakley (six points) was compromised following a wrist injury in Game 4.

In Game 6, the rejuvenated Bulls pulled out a 96-88 win at the United Center. It was over.

Of course, there’s no shame in the Knicks suffering their fourth loss to Jordan in five years. After all, the Bulls didn’t lose three games in a row with Jordan after 1990 (he was a tad competitive). But, they undeniably missed Xavier McDaniel. This time around, Pippen (22.5 PPG in the series) roasted Smith, while Campbell, Rivers, Smith, Anthony, and Davis combined to average just under 39 points per game.

Unlike some other contending Knicks teams of lore, this squad didn’t squander a golden opportunity to a worse team (see: the 1994 Finals).

Yes, they blew a 2-0 lead and a pivotal Game 5, but there’s no shame in doing so against the Prime Jordan and Pippen Bulls, who were a more balanced, more cohesive, and considerably more talented group. No team in league history—literally—might’ve been able to fend those guys off in the biggest moments.

It’s easy to look at the 1992–93 Knicks as a cautionary tale for how not to sacrifice year-to-year growth and chemistry in favor of expediting a championship timeline. I won’t fault anyone for drawing that conclusion. (Also: pay Xavier McDaniel.)

However, as much as Grunfeld swung and missed on his pick-ups, the Knicks won 60 games. They had the best defense, best home-court advantage, one of the best players, and arguably the best coach in basketball. Would they really have gotten past MJ with Jackson, McDaniel, VanDeWeghe, and Wilkins? Maybe, maybe not.

More importantly, they reached Game 7 of the NBA Finals the following season, largely thanks to Jordan’s pivot to the Birmingham Barons.

It sounds simple, but the truth remains, as it did for multiple Knicks—and non-Knicks—teams of this era: Above all else, their problem was not team-building. It was the Chicago Bulls.

»READ: Revisiting random Knicks seasons of the past: the 1988–89 Bomb Squad