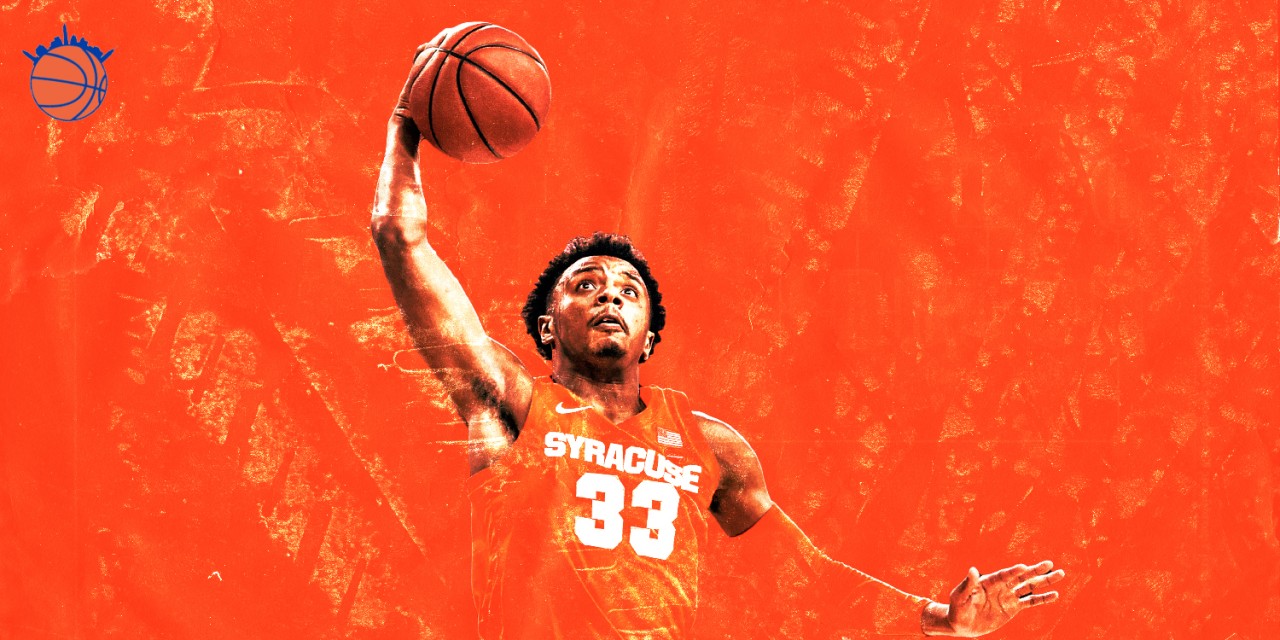 The first of a two-part series on second-round draft targets, we check out a pair of wings who could be on the Knicks’ radar in October: Elijah Hughes and Robert Woodard.

Earlier in the year, the chatter around the 2020 NBA Draft class was that it was weak. Without being top heavy or having multiple generational talents, draft conversations about prospects have been wide reaching. The obvious reason for that is because the pandemic took away the chance for a lot of players to boost their stock, thus gaining a wider audience beyond their conference fanbase.


The reality is that this draft has the identity of being loaded with players who are talented beyond the hard numbers. Prospects are tightly clustered toward the middle and bottom in the sense that they pass the eye test, despite their numbers indicating that they are more suited for time with G League affiliates.

Two such names are Robert Woodard II and Elijah Hughes.

The SEC has long been a conference dominated by a few teams; mainly the Kentucky Wildcats and the University of Florida Gators. Recently, we’ve seen a surge from other squads. Auburn, for example, was in the Final Four last year and ended this season in AP’s Top 25. Mississippi State was well on their way to showing their formidability with Robert Woodard II as an integral part of their defense.

Woodard II is a 6-foot-7, 230-pound wing whose impact on the floor is attributed to his athleticism and his on-ball timing. As a sophomore, he nearly doubled his amount of blocks (32) and averaged a block per game in the shortened season. With a 7-foot-1 wingspan, Woodard II has a knack for getting a hand in his opponent’s face and going up without committing a foul.

Additionally, Woodard II might be one of the strongest prospects in the drafts. Physically, he has the tools to be a powerful dunker. But what jumped out on film is how he uses that explosiveness on the boards. He was ninth in the SEC for offensive rebounding with 68. Watch how he sees the opening from the perimeter.

While his defense is what teams covet in 3-and-D players, Woodard II’s stock has begun to rise (and quite frankly should be higher) because of his shooting efficiency. Per 40 minutes, Woodard II’s was almost 43% from the three-point line. Granted he had fewer attempts than some of his counterparts, but the Bulldogs’ set Woodard up as a catch-and-shoot wing. He’s also a solid bucket-getter from midrange, perhaps stronger than he is from outside. He finished his career at Mississippi State with an increased offensive role playing 33 minutes per game and shooting 49.5% overall.

I think he’s a player who would have benefited immensely from participating in a combine. His resume lacks the awards that command attention. He isn’t a standout in the way that we judge prospects, meaning he wasn’t named All-SEC nor was he a dominant scorer on his team. However, his anticipation and ability to play above the rim is a tool that the Knicks can use when it comes to rebounding. They were among the top for rebounds per game (going from 20th last year to seventh) this season, with an improvement on the offensive glass. Considering the Knicks are short on consistent three-point shooting, Woodard II will be in line to get those put-backs alongside Mitchell Robinson and Julius Randle.

At 20 years old, Woodard II is the exact type of player that Tom Thibodeau can develop into a serviceable All-NBA defender. Sporting an intimidating wingspan, Woodard has the body to be an utter nuisance at all five positions. His length can be used to tighten up the perimeter defense or he can bolster the second unit’s interior defense as another rim protector. From his film, I see how Thibodeau can take that natural hustle and effort and turn it into the caliber of 3-and-D wing for which the Knicks have been looking.

Ideally, the Knicks select Woodard at no. 36, utilizing him as a 3 or 4 who brings spacing and fluidity in the second unit. Oftentimes we see the second unit look unfocused on defense. And that’s mostly due to a lack of effort. Woodard II addresses the effort component. He’s not a shot creator nor is he the type of wing that needs to have the ball in his hands. After a season where he showed marked improvement as a shooter but lacked the volume, the Knicks can once again find a diamond in the rough sitting in the early second. Assuming he gains confidence in his shooting form, on a Thibodeau team Woodard is a more athletic, longer Courtney Lee.

Given he played for a Hall of Fame coach, it’s somewhat surprising that combo wing Elijah Hughes has flown under the radar.

Being a Syracuse fan means watching a lot of guys who should be garnering more conversation on Twitter. The strike against Cuse players is due to the fact that Coach Jim Boeheim runs a dated defensive scheme. On the offensive side of the ball, Cuse tends to default to iso-ball, which sometimes accentuates a player’s weakness.


Yet, Boeheim’s coaching style has unlocked Hughes’ potential as an offensive leader this season. With the exit of Tyus Battle and O’Shae Brissett, Hughes saw an increased role this season. Not only did he lead the ACC in minutes played (1,175), but the 22-year-old was the top scorer in the conference with 19 points per game. After watching him for two years, I can say he’s one of those players who benefited by staying the extra year to perfect his craft as a playmaker.

In the modern NBA, having range from long-distance has become a bare minimum requirement. For combo wings, you need to be able to be a three-level scorer. However, there is still a need for guys who can create space for the pull-up jumper or go baseline with style.


Hughes stands at 6-foot-6 and a sturdy 215 pounds, which gives him great sizing to get buckets either off the dribble or down in the post. He’s an average finisher at the rim. Although he struggles going left, what makes him a threat inside is his soft touch. Per 40 minutes, Hughes left Cuse shooting almost 51% from inside the arc.

In terms of his three-point shooting, Hughes’ shot selection is erratic at times. But I think that can be attributed to the fact that at Cuse he was usually carrying the team on his back.


At the next level, he won’t have to force shots. Hughes’ preference is the corner three, even though he’s been known to let it fly near the logo. His percentage took a slight dip in 2019 because the Orange added a bona fide sharpshooter in Joe Girard III. Which brings us to Hughes’ lesser noticeable skill: finding the shooters in their most accurate spots. (Girard III was fourth in three-point attempts in the ACC.)

Hughes’ main weakness is not necessarily his fault. Playing the 2-3 zone is why many Syracuse guys don’t stick around long in the NBA; they struggle playing man-to-man. Although Hughes possesses the size, he’s not quick enough to be able to cover guards on switches. What I can say after watching him for two years is that he’s improved on his help defense. Similar to Woodard II, Hughes often gets a hand in there to either disrupt his man’s shot or get a steal. Unlike Woodard, Hughes is really suited to play as a 2 or 3. Despite being 6-foot-6, he’s not switchable on defense. Ideally he will be best suited in the three-guard lineup off the bench.

How the Knicks can use Elijah Hughes

One thing about the Knicks that isn’t highlighted enough is how bad they are at free throws and getting to the line. The team was the worst in the league from the stripe while being towards the top in attempts. The team certainly needs more shooting. More importantly, the team needs guys who can get to the charity stripe at will and knock down those freebies. Hughes is a career 81% at the line. Considering the Knicks score about 15% of their points off free throw, I’d say Hughes’ penchant for initiating contact is a plus for the Knicks’ bench.

Thibodeau’s defense is anchored in the principle that players protect the paint. You take away easy layups and cutters, forcing your opponent to settle for threes. Just by the nature of how the game has evolved, bigs can shoot 20 feet and beyond. The point here is that Thibodeau’s system might be a struggle for the younger Knicks to buy into.


Nonetheless, Hughes plays with his hands and sometimes moves his feet. In this sense, not being physically imposing as Woodard II actually works in his (and the Knicks) favor. Thibodeau can develop Hughes much in the way that Iman Shumpert was used. In his two seasons with the Knicks, Shump’s specialty was being a combo guard that plugged holes on the perimeter. Pouring through Hughes’ defensive film, the useful takeaway was how much he’s improved with closing out on perimeter shooters. I see Hughes as a rookie whose deficiencies can be masked by pairing him with length. Over time, Hughes will be forced to learn to move his feet when guarding the pick-and-roll and staying in front of the more agile guards on switches.

The Knicks have some creative options than they may have had in recent years with the picks that they have. If they opt to go with a guard late in the first round, then they know it’ll be imperative to select a bigger body on the wing in the second round. Robert Woodard II and Elijah Hughes check multiple boxes for the rebuilding Knicks: they’re physical, they can shoot from midrange and long distance, and they show a foundational commitment to playing defense.


The one intangible that tips the scale for Hughes is that he’s used to playing under a coach that has an antiquated, hard-nosed style. That adjustment won’t be difficult for him or Thibodeau/the Knicks. Long-term though, Woodard has the upside to be a premiere combo forward. The Knicks have made smart picks in the second round lately that have panned for them. Now, the team is in a position where the picks from this draft will be instrumental in creating a solid supporting cast that will help avoid the premature wear and tear on R.J. Barrett and Mitchell Robinson.