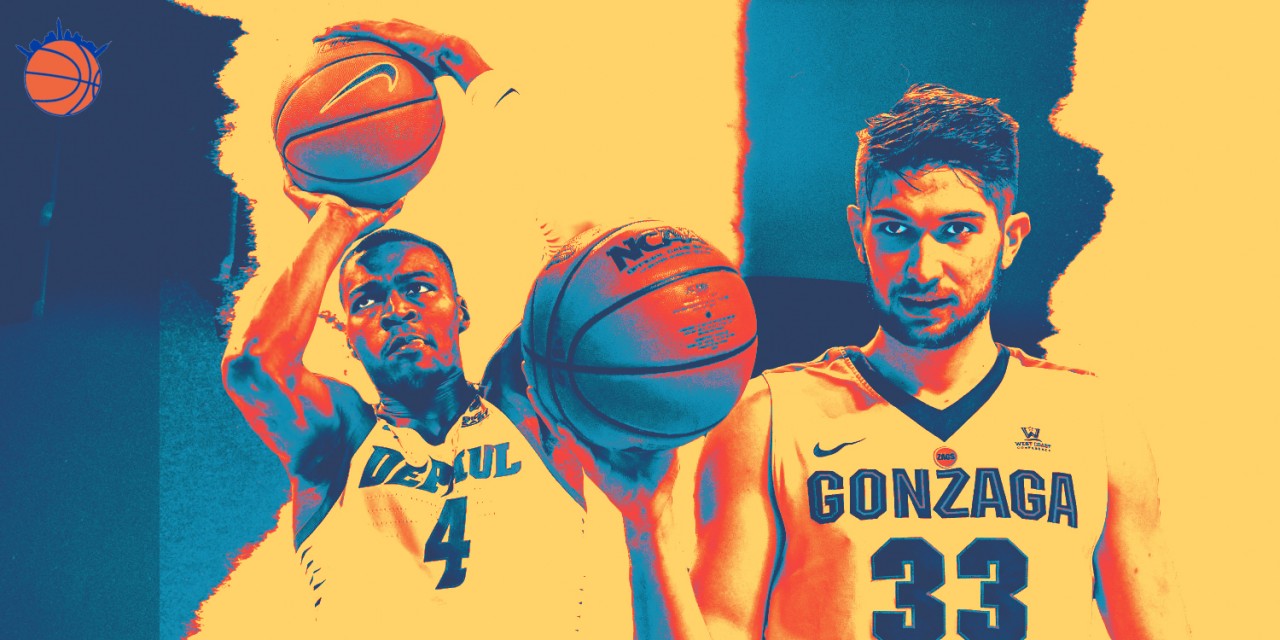 The Knicks will likely have to take a big with one of their three draft picks. Perhaps Killian Tillie or Paul Reed could fit well.

The New YorkKnicks have made quite a bit of turnover in the frontcourt in the last five years as they’ve tried to establish a formidable two-tower pairing. In an era that favors big men who can shoot, the team has struggled to find a permanent fix to mimic the game of Amar’e Stoudemire or, to a lesser extent, the currently ostracized Charles Oakley.

The signings of Julius Randle and Bobby Portis gave some inclination that the Knicks are trying to add pieces that complement their budding defensive juggernaut, Mitchell Robinson. While those iterations were a step in the right direction, the Knicks still have a ways to go in becoming a serious threat inside. The 2020 NBA Draft presents some enticing choices in the second round that will address a need, creating separation between sleeper playoff teams and those who are simply chasing the bottom.

Gonzaga basketball has recently become somewhat of a haven for big men who are Swiss army knives. Despite Mark Few boasting one of the highest win percentages in all of NCAA basketball, Gonzaga doesn’t carry the glitz and glamour that other premiere programs offer. What Few and his program have produced are overlooked guys who enter the draft with a lot to prove. They shoot the ball well. They can pass and generally play good defense. Recently, Brandon Clarke, Rui Hachimura, and Domantas Sabonis have gone on to be selected as stretch forwards who can immediately have an influence on their respective team’s win percentage. The next Gonzaga product who can do the same is Killian Tillie.

At 6-foot-10, the 22-year-old power forward is not only a versatile scorer, but he has great mobility for someone who comes with injury concerns. As a sophomore, Killian Tillie led the West Coast Conference in True Shooting percentage finishing with almost 67% overall. As a four-year player, Tillie comes into the draft with a 63 TS%; more specifically, shooting over 60% inside the arc.

For the sake of attaching all-too-familiar euphemisms about white players, what I will say about Tillie is that he’s craftier than one would anticipate. He has a fluid shooting stroke and a quick release. Tillie is the kind of offensive player where he will make defenders “pick your poison.” He can post up and bully his man down low on the block. Although, the majority film indicates that he might be better suited in pick-and-pop scenarios. Last reported at 220 pounds, Tillie is strong enough to move through screens but still light on his feet to step into a consistent near-perfect stroke from long distance. A career 44% three-point shooter makes Tillie a promising floor spacer at the next level.

The other thing that jumped out about Tillie is that he is constantly moving without the ball. Gonzaga was among the elite in dimes per game, with Tillie himself adding 3.0 assists per 40 minutes. The Zags have the identity of being an unselfish team. Tillie has a penchant for keeping the ball moving while tiring his man out on defense. As you can see, he eventually loses his defender because of the ball movement, leading to an easy finish at the rim.

Tillie isn’t nearly as athletic as Hachimura and he’s not a go-to guy for physicality, but guys who use their length in a smart way are always going to carve out defensive roles in the league. Despite missing significant over the course of his collegiate career, Tillie averaged 5.0 rebounds per game as a senior. In his best season at Gonzaga, he was in the top 10 of the WCC conference for total rebounds and blocks.

What makes Tillie a “Thibs” guy: With his general manager experience, it’s plausible that Tom Thibodeau will have a huge role in picking guys in the draft. For starters, Thibodeau has shown an affinity for “older” players. Because Killie is a four-year player, his experience on a championship caliber team could count for something. Additionally, this team desperately needs a stretch 4 who can either split minutes in the front or be plugged in exclusively as a wing shooter.

Tillie is a decent defender who shows patience as a rim protector. Assuming Robinson continues to curb early foul trouble woes, Tillie is a solid option off the bench to play at the 4 or 5 when the Knicks decide to go big. Tillie’s key skill of being a pick-and-roll/pick-and-pop offensive player gives Thibs the opportunity to surround R.J. Barrett with shooters. A lineup of whichever guard is selected in the first round/Frank Ntilikina/R.J. Barrett/Tillie/Robinson is a lot of length on the floor. I see Tillie serving as a trailer knocking down the easy trey on many nights.

The caveat with Tillie is obviously his health. Guys who carry the injury-prone stigma have to fight against those worries. It’s especially rough when those injuries involve the knees and ankles. Time missed aside, Tillie is one of the most consistent big men in the NCAA offensively. He’s shown enough improvements on defense that I believe he’d make a great project for Thibodeau. Tillie’s ideal tier is becoming a Nikola Mirotic type of player.

There has not been a player from DePaul drafted in the NBA since Wilson Chandler in 2007. Interestingly enough, “Ill Will” was the Knicks’ first-round pick that year. Paul Reed was named last season’s Most Improved Player in the Big East after making the incredible leap from 3.6 points per game to 12.3 points per game in his sophomore season. That may not scream NBA-ready but let’s break down why he could be another gem in the 2nd round.

That’s Reed’s wingspan. And he makes you feel that all over the floor. The 6-foot-9 forward ended his MIP campaign leading the Big East in rebounds (305) and was leading the conference in an abbreviated season this year with 215. He uses his length, along with active hands, to disrupt big and small guys alike. With length like that, he’s invaluable as a switch-y 3 or 4. On the inside, his mere presence is going to force the offense to make tough shots or create turnovers.

Similar to Tillie, Reed saw an increased offensive role this season and made the most of it with his soft touch around the rim. Per 40 minutes, Reed attempted 13 inside shots per game, averaging 55%. When your game is tied in with your athleticism, there’s a tendency to play the run-and-gun style on every possession. What I like about Reed is that, while he can be a slasher or get out in transition, he trusts his soft floater. A longer wing that can shoot the floater at a high clip is going to stick around the league for a long time.

Reed’s glaring weakness is that he can sometimes play a little unfettered. For example, he averaged 2.6 blocks per game this season. That’s impressive. The flip side of that is sometimes he can be overzealous in going for the block and draws ticky-tack fouls. We’ve already experienced this in Robinson’s rookie season. Reed is a few years older, so you would think he would exhibit more body control and use his core strength rather than rely on go-go Gadget arms.

The other problem area was his three-point shooting. He ended his college career as a 33% shooter from long distance. That’s not terrible on such an insignificant volume (1.8 attempts per game) but the cause for concern is his actual mechanics. His feet look flat more often than not and he doesn’t always release the ball high, given his wingspan. I don’t think his mechanics are beyond tweaking. Although, I do wonder if three-point shooting will become a long-term strong suit.

Can Reed thrive in Thibodeau’s system? Everything about Reed’s positives points to the notion that Thibodeau would love his game on the defensive end. He’s physically gifted, he has some good instincts on defense, and he still has room to grow into his body. Because he can pick the passing lane, Reed is a nice addition in the second unit to give those Knicks’ runs some breathing room. As it’s been pointed out, the second unit has historically fallen into the lull of isolation ball. And that starts with bad defense.With Thibodeau’s experience of coaching players who have the right foundation on defense, Reed has the upside to be a borderline starter in the tier of Denver’s Jerami Grant.

I touched on how badly the Knicks need to fill out their second unit in part one of the second rounders. Getting good value in the second round is where teams start to steer the ship toward being a perennial playoff contender. Killian Tillie and Paul Reed both fill a tremendous need to the Knicks’ roster because they each have very specific things they do well right now. Tillie is the perfect stretch 4 that can come in when Randle needs a breather without sacrificing much offense. Reed, in due time, can be a successor at the 4. In the immediate future though, Thibodeau is a coach that can make him a more disciplined post defender and creative disher in the second unit. Both players possess skill sets that Thibodeau should be thrilled upon which to have and build. If he’s going to have a vocal role in making the picks, Tillie and Reed are front-runners in creating the hard-nosed frontcourt that has been a Thibodeau signature.

»READ: Could Jalen Smith be in play for the Knicks with their late picks?