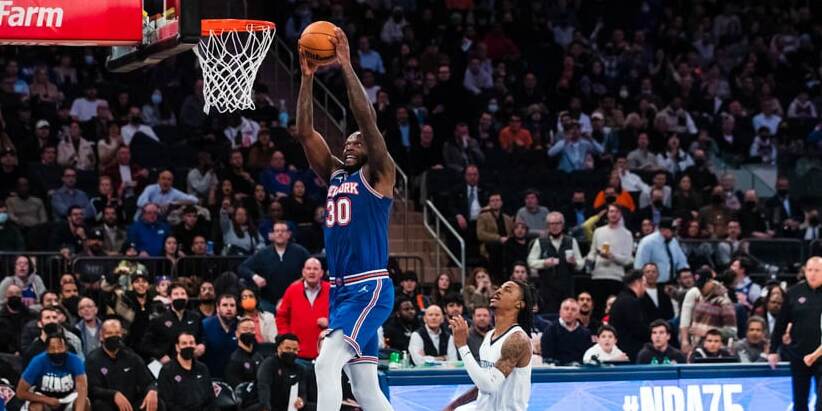 The Knicks have a chance to extend their three-game winning streak tonight in Memphis against Ja Morant and the Grizzlies.

Coming off of a 30-point blowout win in Dallas on Wednesday night, the New York Knicks (28-38) will take on rising superstar Ja Morant and the Memphis Grizzlies (45-22). The Knicks are looking to win four straight games for the first time all season. They have won three straight games on three separate occasions this year but haven’t been able to get the illustrious fourth straight win to this point. Does that change tonight?

Are the Grizzlies for Real?

Sitting in second place in the Western Conference after 67 games played is not an easy feat. As of today, the Grizzlies are 8.5 games back of the Phoenix Suns for the top spot in the West and a half-game up on the Warriors for third place. This level of success has come as quite a bit of a surprise to many outside of the Memphis organization and fanbase. Last season the Grizzlies were 38-34 which was good for a .528 winning percentage and eighth place in the West. To date, the Grizzlies have a .672 winning percentage. Going from winning 53% of your games to close to 70% in one year is obviously a major improvement, but are they a serious title contender already?

Well, they are currently tied for third in the NBA in points scored per game and first in team rebounding by a large margin. A team that can score at an elite level and dominate the boards is a hard matchup for anyone in the NBA. Personally, I would still take the Suns or Golden State Warriors before the Grizzlies this year, due to both of those teams’ past experiences of winning in the playoffs. Memphis does not have that same exposure to a deep playoff run to learn from and apply currently.

However, as we have seen in the NBA playoffs, you don’t always need to be the better team if you have the better player. Having Ja Morant gives Memphis that confidence that they can not only play with but beat anyone.

The Grizzlies come into tonight’s matchup after a win against the New Orleans Pelicans on Wednesday night. In the winning performance, Ja Morant had yet another great game, totaling 26 points, eight assists, and eight rebounds. That stat line shows the type of impact that Morant is capable of having on the game every night for the Grizzlies.

The thing that makes him so special, however, is his consistent ability to perform at that level. This season, only Morant’s third in the league, he is averaging 27.5 points, 6.7 assists, and 5.8 rebounds per game. There are not many players, let alone points guards in the NBA, who do more for their team on a game-by-game basis.

Not only has Morant’s arrival vastly improved the play on the court for Memphis but he has also changed the image and direction of the franchise as a whole. He has placed himself firmly in the conversation for the league MVP as a 22-year-old and is only getting better. The Knicks will have their hands full all night trying to slow Morant down, something the NBA has yet to figure out how to do.

The Knicks’ recent three-game stretch has been some of if not the best basketball they have been playing all year. Julius Randle and RJ Barrett have both gotten into good grooves of their own and are starting to finally play well at the same time. “It was probably our best defensive performance of the year,” Randle told reporters after the win against Dallas. That is hard to argue after only allowing 77 points and holding the Mavs to 31% shooting from the field and 13% from behind the arc.

"We didn't shoot that well from 3 either. It was probably our best defensive performance of the year" – Julius Randle pic.twitter.com/SX1wwXcikQ

Another big reason for the improved play and consistency from the rest of the offense is the recent emergence of Immanuel Quickley. Over the last five games, Quickley has averaged 16.2 points per contest and seems to be a more comfortable version of himself on the court. Earlier in the year, it appeared he was forcing his game to mirror that of a traditional point guard too much and lost what made him special. His notable ability to score the basketball and provide immediate energy to both sides of the lineup.

If the Knicks can keep playing well and building off their recent success, it could at least spark a positive end to the season that they can look to build off of starting fresh next year. They will have to do so without Cam Reddish, who was shut down for the remainder of the season due to shoulder surgery.

Matchup of the Night

Now I want to pick Morant or RJ here, however, I expect both of them to outplay their respective matchup in this contest tonight. For that reason, the matchup to keep an eye on tonight will be Jaren Jackson Jr. going up against Randle. I think whoever is able to give their team a leg up in that battle on the boards and offensive end will be able to give their team the best chance to win.

Obi Toppin (hamstring) is questionable after missing the past four games. Nerlens Noel, Cam Reddish, Derrick Rose, Kemba Walker, and Quentin Grimes are all out.