Knicks Seek Rare Over-.500 Record With Pistons Matchup on Tap 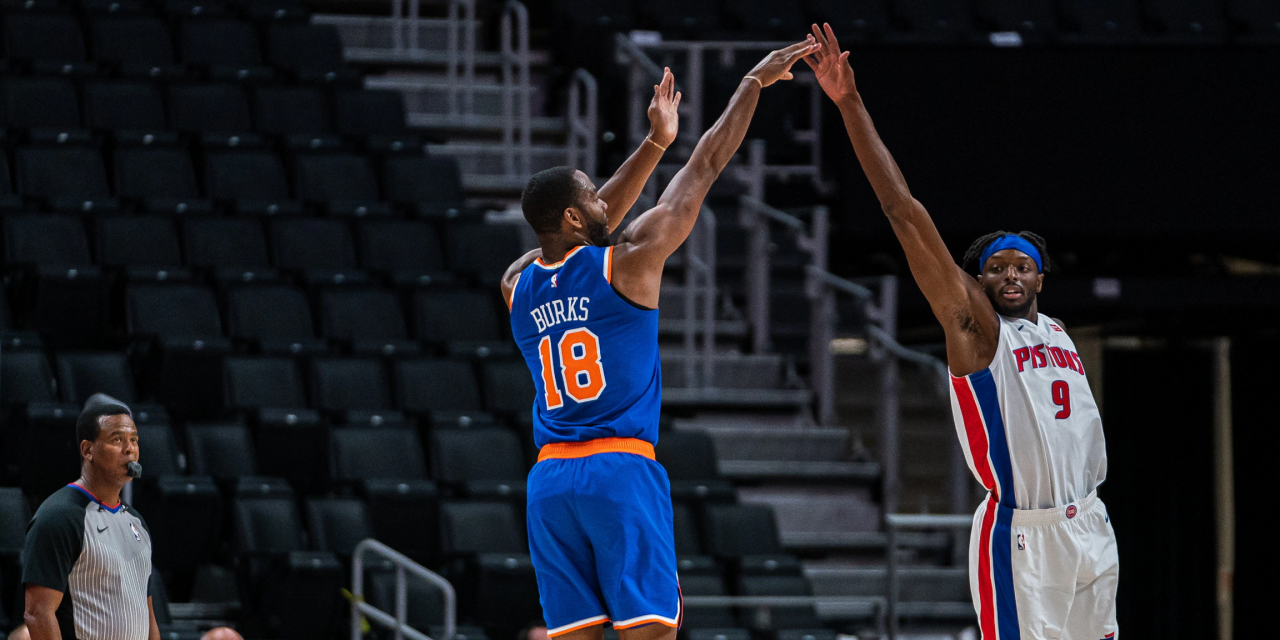 Julius Randle and the Knicks play a second straight game, this time on the road, as they face former Knick Dennis Smith Jr. and the Pistons.

We are almost halfway through the 2020–21 NBA season and the New York Knicks (17-17) are in the top five of the Eastern Conference. I’m just as bewildered as you are.

This rough and tumble New York squad has a mental toughness that allows them to stay in—and win, in several cases—close games. The most recent example was yesterday’s thriller against the Indiana Pacers. The Knicks were down by 16 in the second quarter, came back to take a nine-point lead in the fourth quarter, went back down by five points with four minutes left, and scrapped out a victory.

The Knicks are right back in action tonight at 8 p.m. ET, this time on the road, getting their first look of the season at the Detroit Pistons (against whom they play again on Thursday).

The Pistons, at 9-24, have the worst record in the Eastern Conference. But they are not to be taken lightly. They’ve beaten some of the best teams in the league—the Nets, Lakers, Sixers, and Suns. Former Coach of the Year Dwane Casey has his Pistons playing hard, and they have the 20th-best Defensive Rating to show for it. Given the context of this team’s brand new look and youthfulness—only three players from last year’s squad remain and many of the players currently in the rotation are younger than 24—it’s a pretty impressive feat.

26-year-old forward Jerami Grant leads the way for Detroit. The Syracuse product has himself at the forefront of the Most Improved Player award discussions, averaging 23.5 points, 5.3 rebounds, and 3.0 assists per game. He shoots 36.9% from deep on 6.7 attempts per game and is a versatile defender.

Grant’s supporting cast includes a collection of decent veterans—namely Mason Plumlee and former Knick Wayne Ellington—and a bunch of young players. Among the most impactful youngsters is 19th overall pick Saddiq Bey. The 21-year-old is a sniper from deep, shooting 41.4% from deep on the season on 5.2 attempts per game. Isaiah “Beef Stew” Stewart, drafted 16th overall, brings terrific intensity and physicality from the center spot, averaging 5.7 boards and 1.0 block per game in just 18.0 minutes.

New York’s old friend Dennis Smith Jr. has been elevated to the starting lineup amidst a flurry of injuries. In his four games as a starter, Smith has looked more like the intriguing prospect he was when the Knicks traded for him. He’s averaging 12.0 points, 4.0 assists and 1.5 steals while shooting 50.0% from the floor and 46.7% from beyond the arc.

Given that both New York and Detroit are bad offensively and play at a slow pace, this forecast of this game suggests a rock fight is on the way.

While the headlining matchup of this game is obviously Julius Randle and Jerami Grant, two skilled forwards who have made tremendous progress to their games, the off-the-bench rookie guard showcase of Immanuel Quickley versus Saben Lee is also worth watching.

Saben Lee has looked quite good on both ends this season pic.twitter.com/OGSEKmNBmn

Quickley and Lee have contrasting styles of play, which should make for an interesting battle between the neophytes. While Quickley utilizes his floater and three-point shot very frequently, Lee is a slasher with the shiftiness and craft to finish in the paint. According to Cleaning the Glass, 62% of Lee’s shots come at the rim, which is the 97th percentile amongst point guards. He’s shooting 17-of-29 on those shots.

Lee, like Quickley, is also adept at drawing fouls. He gets fouled soon 17.9% of his shots while Quickley gets fouls on 10.5% of his, per Cleaning the Glass. Although Lee gets to the line more, it’s much less consequential for the defense than it is when Quickley gets there, as Lee shoots just 61.5% on free throws. Quickley converts on 93.8% of his charity stripe attempts.

A flash of Frankie

In the absence of Elfrid Payton, which has elevated Derrick Rose to the starting lineup, Frank Ntilikina has stepped up as a backup off-ball guard and done a solid job. His defense remains good and he has scored at an efficient rate, though his actual output is still characteristically minimal. He made the game-sealing play against Indiana by coming up with a steal and sinking two clutch free throws.

The hope is that Ntilikina is able to carve out a more solidified start in Tom Thibodeau’s rotation. But the most likely situation is that the only positive the Knicks are looking for is Ntilikina’s trade value to creep upward.