With the 9th Pick in the 2018 NBA Draft, the Knicks Select Kevin Knox 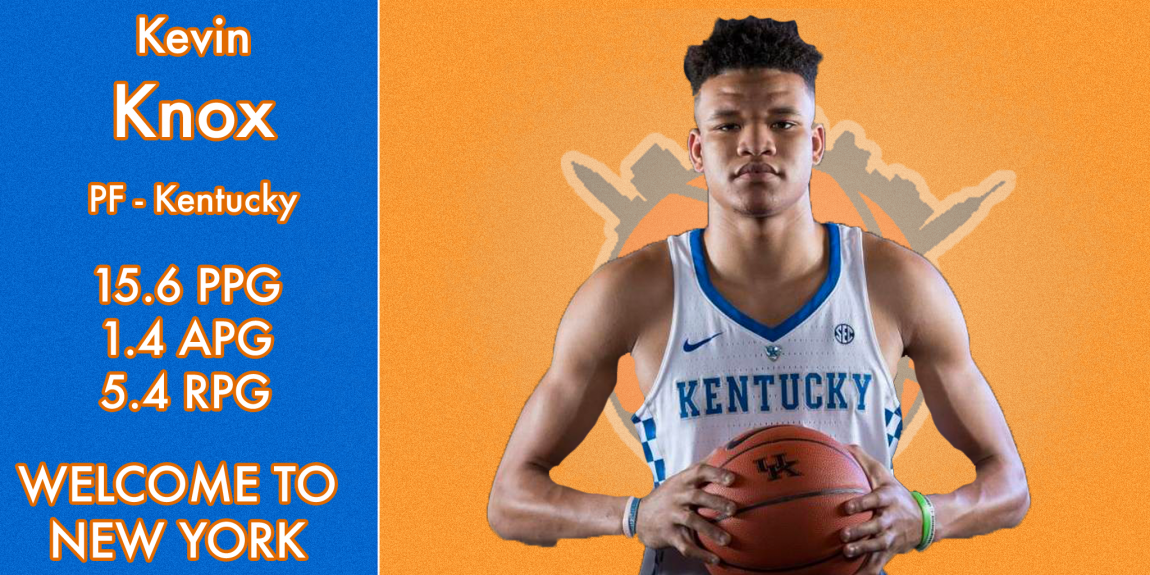 The third-youngest player in the draft joins the Knicks oozing with upside as a scorer on the wing.

The New York Knicks selected University of Kentucky forward Kevin Knox with the ninth overall pick in the 2018 NBA Draft.

Knox spent most of the season at Kentucky assuming a role within the offense, leading the Wildcats in scoring but rarely dominating. At just 18.8 years old, he is as green as they come. The meteoric rise in Knox’s draft stock was somewhat surprising, given that he didn’t blow teams away in workouts. NBA teams are enamored with his build, and now the Knicks will be hoping he can turn that frame into consistent play.

The 6-foot-9 forward averaged 15.6 points, 5.4 rebounds, and 1.4 assists per game as a freshman under John Calipari. He posted fairly anemic defensive stats, averaging just a shade under one steal per game while blocking just 0.3 shots. Defensive activity is an area that Knox will need to improve upon.

The Knicks made Knox their man after he “kicked around” Miles Bridges in a private workout. The faith that Knox has in himself has allowed him to push his game to a new level, and he feels as though his game translates well to the NBA, saying he is “what the NBA wants—a long guy who can really handle the ball and shoot the ball and make multiple decisions.” For David Fizdale, he’ll have his work cut out for him with Knox. The traits that New York’s front office have championed this offseason, namely defense and a relentless attitude, aren’t quite defining parts of Knox’s game. He’ll provide shooting on the wing and will give the Knicks another option to spot up for three, but he’s not going to come in right away and make an impact defensively. It’ll be on Fizdale and New York’s staff to tap into Knox’s motor and unlock the tantalizing upside he possesses.

In our assessment of Knox, I talked about how confident I am in his shooting ability translating. A 34 percent three-point shooter in college, he has the type of jump shot that is emblematic of a strong wing scorer. Watching highlights of Knox is not necessarily the best way to ingest his game, due to some inconsistencies on a game-to-game basis, but there is so much to be excited about for Knox on the offensive end. Strap in for the journey, Knicks fans.