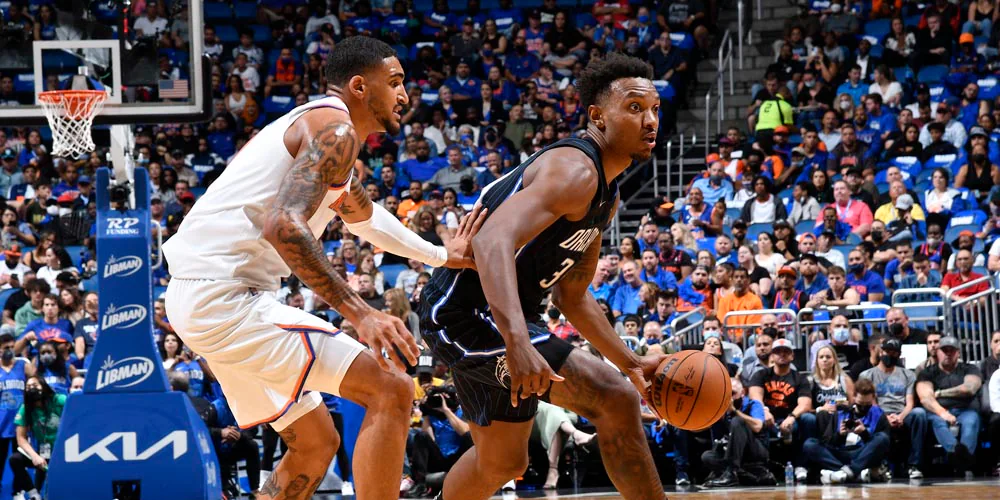 The Knicks took an early lead in Orlando, easily beating the Magic while registering a new franchise three-point record in the process.

The New York Knicks (2-0) thumped the Orlando Magic (0-2) Friday by a final score of 121-96. The Knicks had a balanced attack offensively, with seven players reaching double-digits in scoring. Julius Randle led the charge with 21 points and 10 rebounds, while Evan Fournier lagged just behind him with 18. Mo Bamba was the top performer for the opposition with a 15-point double-double.

New York seemingly couldn’t miss from beyond the arc. The squad attempted 54 treys and swished 24 of them (both of which were new franchise records), good for a scorching 44.4% clip. Entering this season, the Knicks stressed upping their three-point usage from the year prior. Two games into 2021–22, and this strategy has paid dividends.

Below are some takeaways from the Knicks’ wire-to-wire victory.

Kemba Walker had a forgettable regular-season Knick debut against Boston. In 36 minutes of play, he scored just 10 points on 3-for-8 shooting and finished with more turnovers (four) than assists (three). He seemed to be pressing at times and was careless with the ball. However, credit to Walker, he put this underwhelming performance behind him against the Magic.

The New York native had a near flawless start to the game—he scored nine points (on three triples) just five minutes in, nearly equaling his season-opener point total. He accounted for three of the Knicks’ opening four baskets.

The 2nd of Kemba’s 3 triples. His off the dribble three point threat opens up so much for this team pic.twitter.com/axU5qL10G0

But it was how Walker earned these threes that’s most noteworthy. He was creating off the bounce in the high pick and roll, which Knicks fans didn’t see from their starting floor general, Elfrid Payton, last season. With Walker’s speed and lightning-quick release, he got his patented top-of-the-key threes whenever he wanted in the early going.

His sizzling shooting allowed the Knicks to break the game open expeditiously, as the team held a 36-16 lead at the end of one. And from there, the Knicks rode the momentum the rest of the way. If not for Walker’s early-game three-point barrage, the outcome could have been very different. Not to say the ‘Bockers were in danger of losing by any means, but Walker was the energizer bunny behind a superb start that helped seal a win well before the final buzzer sounded.

To say the Magic had a rough go scoring the ball would be a massive understatement. Sure, Orlando may very well end up with the worst record in the league. They don’t have any bona fide stars, and their best players are in their early 20s (Suggs, Bamba, Carter Jr., Anthony). Nonetheless, one cannot solely chalk up their woeful offensive night to unspectacular personnel.

The 2020–21 campaign was no fluke or outlier: the Knicks are (and were) arguably the best defensive team in basketball, and they backed up this sentiment tonight. When all was said and done, the Magic shot a sub-par 39.8% from the field and threw the ball away 18 times. Additionally, the Knicks collectively accumulated 13 stocks (steals/blocks).

Cole Anthony and Jalen Suggs are the Magic’s starting backcourt and two prospects the franchise has high hopes for. But tonight, they both struggled mightily, combining to shoot 7-for-31 from the field. It’s not like the pair simply missed open looks—Mitchell Robinson’s interior defense smothered them at the rim. In fact, he stymied just about every Magic player at one point or another. As a result, Orlando—believe it or not—shot nearly identical percentages on threes and twos.

While it was Robinson who anchored the defense, it was a team effort overall. Barrett and Walker came up with a block and steal, and Fournier finished with two steals. It’s encouraging to witness Thibodeau’s defense-first philosophies rubbing off on Walker and Fournier, who don’t exactly have a reputation as world-class irritants.

Up next: the Knicks host the Magic for the back half of the home-and-home series on Sunday.

»READ: Kemba Walker’s health could determine how far the Knicks can do