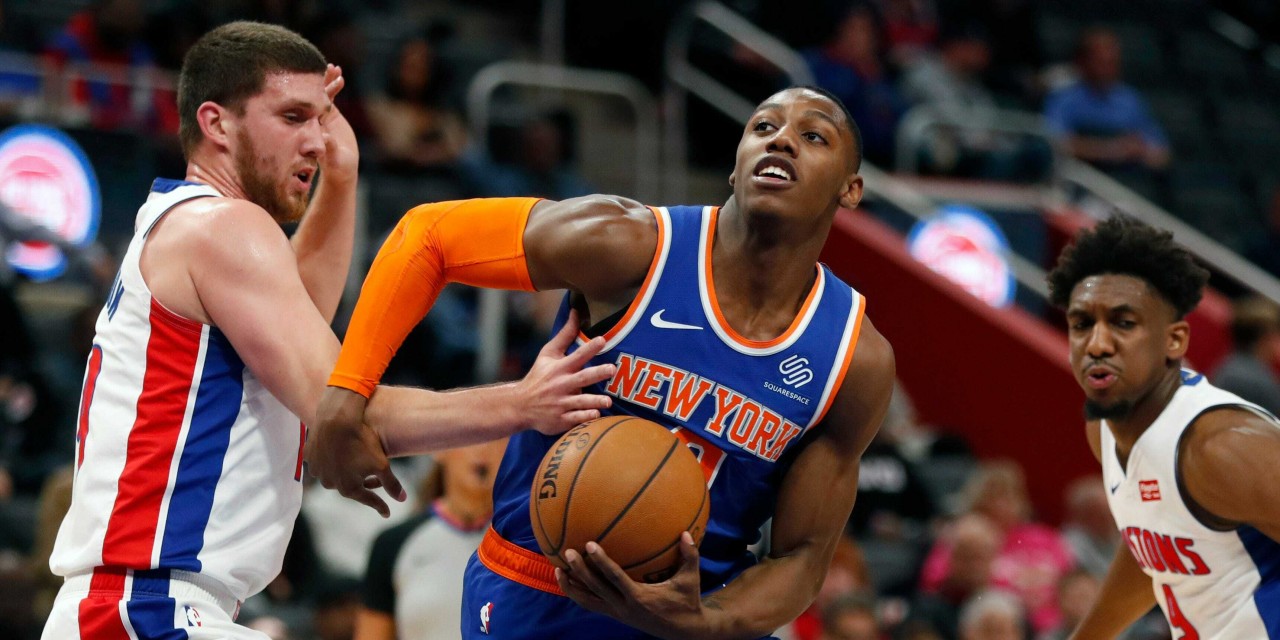 Tom Thibodeau grabs the clipboard for the first time for the Knicks in New York’s road preseason matchup with the Pistons on Friday.

It has been an eventful 275 days since the New York Knicks last g̶r̶a̶c̶e̶d̶ appeared on the hardwood. That streak ends tonight, as the Knicks return to action against the Detroit Pistons in both teams’ preseason opener.

When the Knicks last played, they beat the Atlanta Hawks on March 11th to put their record at 21-45. In between the nine-month hiatus, New York reshuffled its coaching staff and tweaked its roster. The nine players returning from last year’s team are joined by a collection of players that mostly have a history with CAA, the University of Kentucky, or both. Leon Rose’s first full season at the helm projects to be a rebuilding year.

The Pistons greatly shook up their roster this offseason. Blake Griffin, Derrick Rose, Sekou Doumbouya, and Svi Mykhailiuk are the team’s only holdovers from last year’s squad that posted a 20-46 record. Detroit had three first-round picks in the 2020 draft and splurged on several free agents.

New York and Detroit will face each other again on Sunday and will not play each other in the first half of the regular season.

The most highly anticipated Knicks debut to watch is that of Obi Toppin. The Brooklyn native and eighth overall selection of 2020 draft spent last season crushing rims and recording historically great numbers at Dayton. The 22-year-old forward has flashed a bevy of offense skills—finishing in the paint, three-point shooting, ball handling—but comes with serious concerns about his defensive abilities. He spoke confidently about his defensive skills at media day and has been working hard to improve his game.

Fellow first-round pick Immanuel Quickley will make his Knicks debut as well. New York acquired the sharpshooting Kentucky guard on draft night. He made 2.1 triples per game on 42.8% beyond-the-arc shooting in his second and final collegiate season.

Tom Thibodeau will coach his first NBA game since January 2019. Thibs was a Knicks assistant coach from 1996 to 2003 and was hired to be New York’s head coach in July. Mike Woodson will return to New York’s sidelines as an assistant coach.

How will the youngsters play (and be played)?

Last season’s Knicks squad was guilty of overplaying its veterans at the cost of playing time for the young, developing players. Julius Randle, Elfrid Payton, and Reggie Bullock ranked in the top six in minutes per game on the team last year. Now with Austin Rivers, Nerlens Noel, Alec Burks, and possibly Michael Kidd-Gilchrist joining the fold, where does that leave New York’s batch of youngsters? Seeing how (and how frequently) each young player is used tonight could offer a glimpse into how New York values each one.

Mitchell Robinson showed the most promise out of any young Knick last season despite only starting seven times. As a second-year big man, he set the record for field goal percentage in a single season. Although he was the Knicks’ best player last season and is likely to be their best this season, it’s unclear if he’ll start.

The only other player under 22 years of age that recorded starts in the double digits last season was Frank Ntilkina. The young, dashing Frenchman started in 36 games last season and put up roughly the same stat line from his previous two seasons.

New York will have its hands full trying to find playing time for the three aforementioned young players, Toppin, Quickley, Kevin Knox, Dennis Smith Jr., Ignas Brazdekis, and 23-year-old trade acquisition Omari Spellman. Thibodeau doesn’t have a penchant for playing unproven young players big minutes, so some young ‘Bockers may be on the outside looking in on the rotation again. Tonight’s rotation will reveal hints of which youngsters are in the best standing with the team, and which ones may soon be on the chopping block.