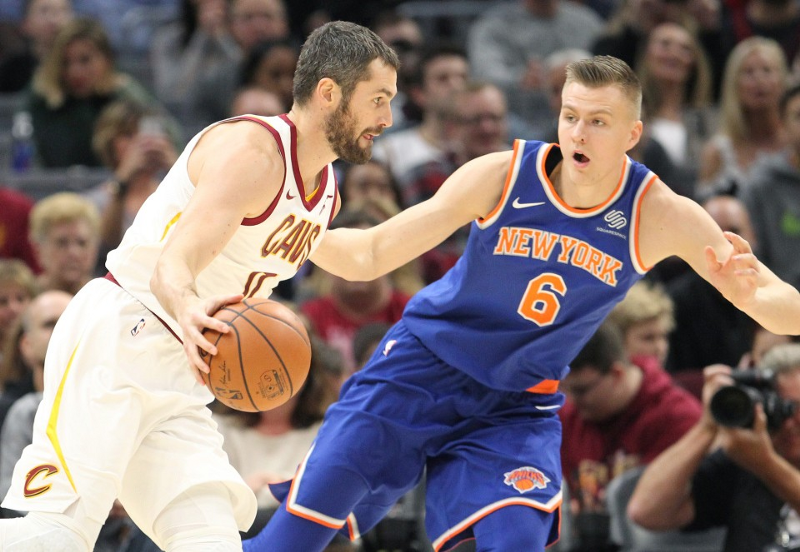 Entering tonight, the Knicks and Cavs had both dealt with their fair share of struggles. However, no one expected what we saw tonight to happen.

Due to a mixture of hot shooting, great passes, and some good luck, New York blew Cleveland out in the Q. Let’s take a deeper look at what happened Sunday night out in northeast Ohio.

Following a rough start to his second campaign with New York, Tim Hardaway Jr. had a nice breakout game against the Cavs, much to the relief of Knicks fans.

THJ was taking the same shots he’s been taking so far this season, but he just looked more confident tonight, creating his own shot as well as finding the open man. It’s possible that the ankle injury that’s been bugging him recently cleared up, and he’s simply more comfortable on the court:

This is his game everyone pic.twitter.com/v7bSauJhJj

A very cool 34 points and eight assists for Hardaway Jr., including five triples and a +22 plus-minus in a game-high 41 minutes. Well done, Junior.

KP closes out the Cavs

Time and time again we saw KP get the ball in the post and find a way to get a bucket. Whether it’s getting around his man for a score close to the basket or rising up and knocking down a jumper, Kristaps has become a legitimate scorer.

On the defensive end, Porzingis was just as dominant, altering the shots of any Cavalier that drove to the hoop. He finished with two blocks, including one on former Knick Derrick Rose in which he didn’t even jump to disrupt the shot.

One thing I’d like to see change with Kristaps is where he gets the ball. Too often KP gets the majority of his points in iso plays in the post. While it’s effective, he could be used in so many different ways on offense, whether it’s shooting more threes, or getting the ball more on cuts. Introducing a more versatile set of plays designed with the intention of KP scoring could do wonders for the Knicks, and is yet another thing the coaching staff needs to improve on:

K Love too short for this man. pic.twitter.com/NIuPjBZSUS

An ice cold backed up dagger three from the Unicorn put this game away for the Knicks. That’s 32 points for Porzingis and 12 rebounds.

This is true: KP is the first ‘Bocker in the franchise’s history to score 30 points or more in four of the team’s first five games. Legend.

Two of New York’s most promising young players, Willy Hernangómez and Damyean Dotson, once again saw DNPs. While it is difficult to play too many bigs and match up well with Cleveland, giving Willy zero minutes is inexcusable.

The game was a blowout, and there were multiple opportunities for Dotson and Willy to get some run, but giving young players minutes has been one of Coach Hornacek’s glaring flaws this season. In a year where expectations are as low as they are for the Knicks, developing young talent needs to be the number one priority, and it simply hasn’t been for this coaching staff.

On the plus side, weirdly Hornacek’s decision to insert Jack into the starting lineup (and grant Ramon Sessions zero playing time in two consecutive games) has ended up immensely factoring into the team’s pace and effectiveness in games.

While he only saw 14 minutes of play, Frank Ntilikina had a decent performance off the bench. The French Prince finished with a modest statline of five points, two assists, and two steals but looked more comfortable than he did in his previous performances. He knocked down a crucial three during a big Knicks run in the fourth quarter, and dropped an absolute DIME to Hardaway Jr., which led to a trip to the charity stripe:

The Knicks are now 2–3 on the season, and will head back to New York for a Monday night match up against Nikola Jokic the Denver Nuggets. Knicks in 3.

Follow The Knicks Wall on Facebook and Twitter for more coverage, and listen to the TKW Podcast on iTunes and SoundCloud, this week featuring ESPN’s Ian Begley!