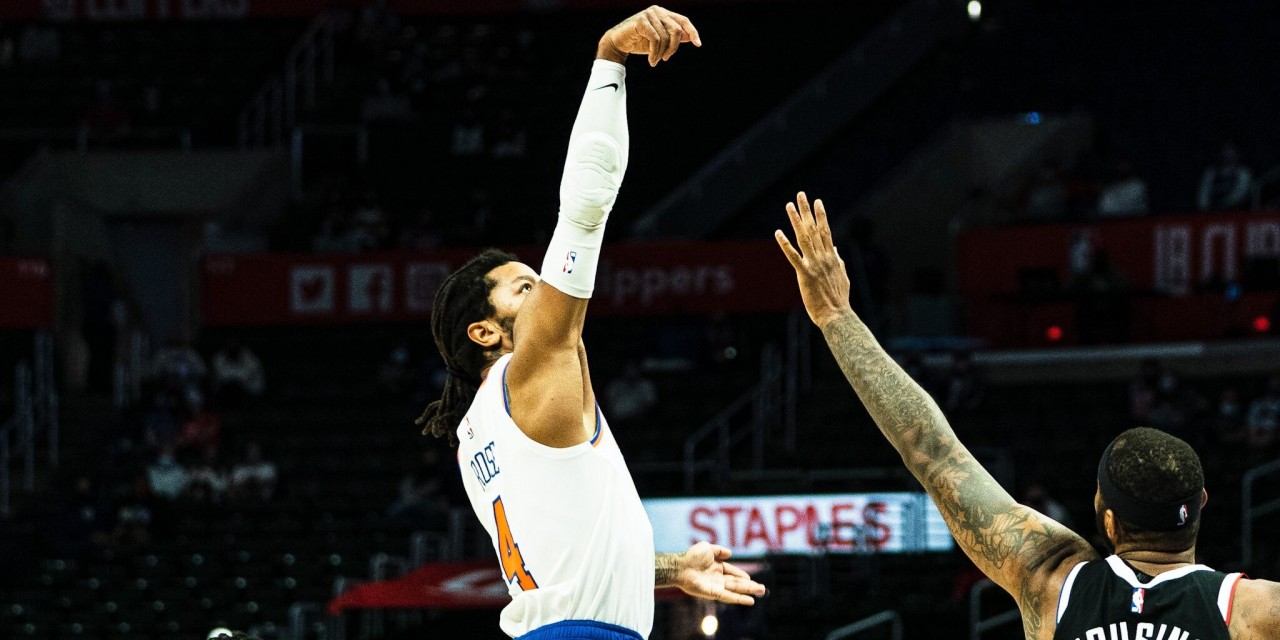 What was viewed as a potential loss on the schedule for the Knicks turned out to be a huge victory and a testament to the process preached during the Tom Thibodeau era.

LOS ANGELES, Calif. — What a win by the New York Knicks.

With Immanuel Quickley and Alec Burks ruled out before Sunday’s tip-off, the Knicks felt vulnerable—more vulnerable than any other period during their six-game road trip. After consecutive losses against Western Conference contenders, the Knicks found themselves with a third against a talented Los Angeles Clippers team, a team that had beaten them before earlier in the season, felt like another loss on the schedule.

Zoom out, and it began to felt like the feel-good Knicks were running out of gas. Entering the game with the fourth seed in hand by a half-game, New York were slowly losing their grip on one of the potential achievements earned from this season. With Atlanta and Miami right behind them and the Knicks out of form, the feeling was that one, or both Hawks or Heat, would surpass them, leaving New York in a potential matchup with Milwaukee or Brooklyn in round one.

But much like the rest of the 2020–21 season, the Knicks didn’t allow being shorthanded to be an excuse. They didn’t allow expectations to be the reality, traveling to the Staples Center and exiting on Sunday with a 106-100 victory over the Clippers, moving a full game ahead of both Atlanta and Miami and one step closer to clinching the fourth seed in the Eastern Conference.

“The heart of this team has been special from the beginning,” Thibodeau said after the win. “As you mentioned, the job for us now is to be hungry and don’t change. This is what we’ve done all year. Just continue to concentrate on improvement on the next opponent. … As the season has progressed, the toughness to win on the road and compete against these teams. It’s telling us a lot, but we still have a long way to go.”

For the Knicks, Derrick Rose led the way with a team-high 25 points off the bench to go with six rebounds and eight assists. R.J. Barrett registered 18 points, seven rebounds, four assists, and played excellent defense against Kawhi Leonard, serving as the primary defender as Leonard finished 9-of-26 from the field. Julius Randle shot 7-of-19 from the floor but finished with 14 points and 14 rebounds, including a huge step-back jumper to put the game out of reach.

Even though he felt short of his regular-season averages, Thibodeau went out of his way to point out just how important Randle was, even on nights where the shot waned.

“He did have a big night,” Thibodeau remarked about his first-time All-Star Randle. “They were double-teaming him; he’s spraying the ball. Everyone tends to measure players on points or shots and not the all-around game. The big thing is that; just the perseverance, the way he rebounded the ball, the hustle plays that he made. He played a great game without shooting the ball, and at the end of the game, he made several big plays for us.”

Rose, Randle, and Barrett have each shared heroics throughout the season, but the unsung hero for the team has been Reggie Bullock, whose 24 points and five made three-pointers were key in New York’s statement win.

After a tumultuous first season in New York, both on and off the floor, Bullock has emerged into a solid veteran presence for the Knicks, offering outstanding outside shooting and defense alongside Barrett. The Randle-to-Bullock connection has been key for their offense, but the former Tar Heel has done wonders as the team’s starting shooting guard.

Most assists from one player to a single teammate (w/ per-36-minute numbers). pic.twitter.com/FLaY23hwPx

“He’s the unsung hero for us every night,” Thibodeau said upon hearing Bullock’s name. “Every night, he’s guarding a tough opponent; he never stops working on the defensive end … and Reggie’s shooting has been off the charts. What Reggie does, what Taj [Gibson] does, what Alec Burks does; those guys are our unsung heroes, but there’s a great appreciation by everyone in that locker room.”

The win exudes everything about the first season under Tom Thibodeau, easily replacing the overtime victory over Memphis as the Knicks’ game of the season. Not only did it show New York’s resiliency against better teams, but it showed the coaching difference and ability to adjust from previous years.

After allowing 53% shooting in their first matchup, the Knicks held Los Angeles to just 43%, more than enough to come away with the victory.

For Randle, coming back from a double-digit defeat at the hand of the Clippers in January to snagging a road win over them in May is a testament to the growth these team has endured over the season.

“I think this win just shows the growth throughout the course of the year,” Randle said. “I think at the beginning of the year, and we knew we could compete with anybody as long as we stayed together and played together. Now, as a team, we feel like we could beat anybody every time we step on the court with and that’s the beauty of our team.”

With a record of 38-30, the Knicks remain the fourth seed in the Eastern Conference heading into Monday, a game ahead of Atlanta and Miami with just four games remaining. With a Los Angeles Lakers team that could be without star forward LeBron James, the Knicks could find themselves needing just one win in their final three games to host their first playoff series since 2013.

Despite it being one of the few topics of conversation in the locker room, Rose reflects on the Thibodeau mantra: Working one day at a time.

“I mean, we think about it, but we know we’re not finished with what we’re doing,” Rose said. “We have a goal. We want to keep getting better along the way. That would be big, but at the same time, Thibs is always talking about going through the finish line. Making sure that we’re sharp, making sure that we keep focus, we can go to where we want to go.”