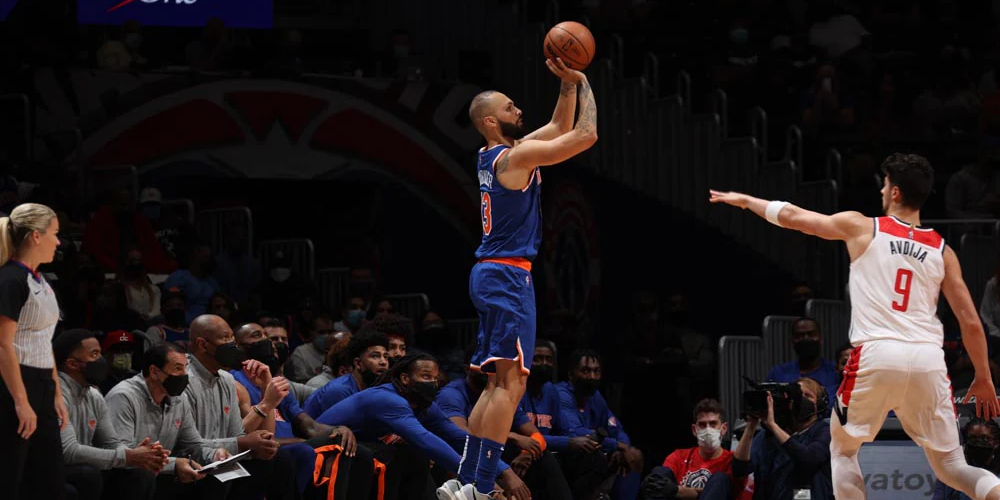 The Knicks launched 52 threes and RJ Barrett had an effective two-way game as the Knicks continued through the preseason with a win over the Wizards.

It’s tough to take much from a preseason game, let alone one where Julius Randle, Mitchell Robinson, and Nerlens Noel were all out. Still, the Knicks came into their second preseason game attempting to adjust to their new offensive mindset, and it showed. The Knicks shot a ton of threes—52 to be exact. The Knicks want to shoot more threes; as Derrick Rose said, the Knicks are aiming to shoot 40 a night. They reached that total and then some against the Wizards.

PINCH ME WE HAVE PULL UP 3 POINT SHOOTING pic.twitter.com/H9zsGOZ6CS

It was a group effort, too. Kemba Walker got in a few shots while Barrett and Fournier created a few good looks for themselves from the outside.


The guy who stole the show, however, was Kevin Knox. Knox finished the first half with 12 points, mainly off 4-of-5 shooting from the outside—huge for a player on the outside looking in on a rotation spot. Knox looked very comfortable alongside several creators.

Along with Kevin Knox receiving more playing time, Obi Toppin moved into the starting lineup, while Taj Gibson got some more minutes. Toppin played poorly on defense in the first half and more importantly, the entire Knicks frontline looked outplayed. On the other side, Washington’s Montrez Harrell and Daniel Gafford just bullied in the paint, not just attacking offensively, but pulling them away from the rim and forcing them to defend.

If there was anything to be disappointed about, it was that the New York defense allowed the Wizards to come back into the game for a spell. Spencer Dinwiddie was able to go wherever he wanted against Rose and Walker, thanks to his size. Bradley Beal, even when the Knicks were in a zone, could get to the basket and score at will in the second half. That said, Beal was visibly frustrated with Barrett defending him in the first half.

A bit more on the third-year man out of Duke: Barrett played well on both sides of the ball, and while the on-ball jump doesn’t look apparent, Barrett continues to find little creation spots to find good looks. He also looks way more comfortable launching threes, which is great for his overall game. His defense is good, as well. All night, he pestered Beal and did a good job on Dinwiddie on a few possessions. Overall, a solid night for Barrett, which has seemed to become the norm for him.

Once the Knicks turned up the heat, there was nothing Washington could do. There wasn’t a huge run that catapulted New York into the lead, but the Knicks did a good job shooting threes and tightening up their defense. All in all, a solid preseason performance where the Knicks flashed the new skills they added this offseason.

Swing it around. Knock it down. pic.twitter.com/pkoxlTQPNH

The Knicks travel back home to The Garden to face the Detroit Pistons (1-0) on Wednesday, October 13th. Tip-off is set for 7:30 p.m. EST.