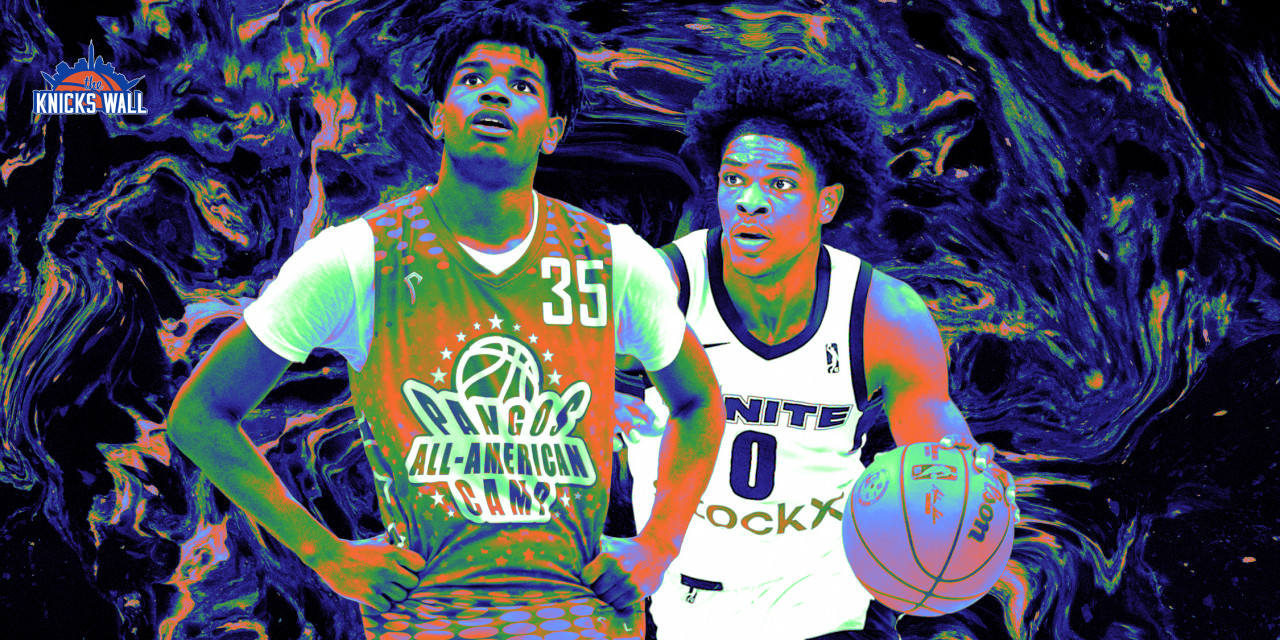 While the Knicks hold at least one first-round draft pick before the trade deadline, prospects are taking several pipelines to the NBA Draft.

As the year inches closer to June’s 2022 NBA Draft, it’s worth taking a look at not only this year’s lackluster draft class but also the draft trends that are being seen in a broader sense. This class is not going to knock anyone off of their feet, but it does predict things to come in the future. It is one of the first dominoes to fall in much larger conversations in regards to the NBA draft.

As the smoke around the NCAA “one-and-done” rule is nearing an end, fans may be looking at the next era of prospect evaluation. For many decades, the only choice was multiple years of college before trying your hand in the NBA. Once Moses Malone broke down the “straight from high school” barrier, anything became possible. With the success of players like Kobe Bryant and Kevin Garnett in the ’90s, the league entered an era defined by 18-year-old prospects straight from high school. That led to booms like LeBron James and Dwight Howard, as well as busts like Kwame Brown and Eddy Curry.

When the one-and-done rule was installed in 2005, there was one freshman who was drafted in the lottery, which was par for the course at that time. In the time since that has only increased to the point where any non-freshman prospect becomes an anomaly. That has gone in and out over the years depending on the players in any given class. This class leans on the older side, but more so than that, it brings to light a more important trend over the last couple of years.

Players avoiding college basketball for one reason or another is not unheard of but was few and far between before the last few years. Brandon Jennings was the first player to go to Europe to avoid college in 2008 and, since then, other players have followed suit in going pro straight from high school. Former Knick Emmanuel Mudiay went to China after recruiting scandals came to light. These walls continued to come down in 2018 when Anfernee Simons and Mitchell Robinson stayed in prep programs after graduating as opposed to joining the NCAA.

Two years ago is when a seismic shift was seen in this direction when LaMelo Ball and RJ Hampton forewent college basketball. Ball and Hampton went to the NBL to play professionally in Australia before being drafted third and 24th, respectively. Those players showed there was a market for big-name prospects to go and get paid as opposed to playing a year of college basketball for free. Not only did they show that it was successful to bring attention to the prospects, but also that it could still get you drafted in the high lottery, at least in the case of Ball.

Last year’s G League Ignite experiment took that even further, giving an NBA-approved alternative option for players looking to avoid the NCAA’s iron fist. Jalen Green and Jonathan Kuminga had up and down years in the G League but proved it a success, going second and seventh in the 2021 NBA draft, respectively. It was always destined to increase from there and this year is continuing in that direction.

While this class does not have the tier-one superstar in the G League that Jalen Green was or Scoot Henderson of the 2023 class will be, it does make up with quantity on the Ignite team. Jaden Hardy was the cream of the crop from this G League class as a top-five prospect coming into the year. While he has fallen down boards a little bit throughout the year, his hot play as of late has him rising back into the lottery and maybe even into the top five. Hardy is an incredibly smooth guard that struggled against the older and more experienced opposition in the G League, which is to be expected. However, that can also be a positive when you look at the adjustment to the speed of the game and the athleticism of the opponents, which are a step ahead of the competition in college basketball.

Jaden Hardy finishes with 31 points and 9 assists on 13/19 from the field.

Best performance of the season and a much needed bounce back game. pic.twitter.com/Jp47kilL4T

Along with Hardy, there are another three prospects on the G League Ignite who have garnered attention from front offices and draft scouts alike. Depending on who you talk to, you will see varying grades on Michael Foster, Dyson Daniels, and MarJon Beauchamp as prospects. It is more than likely that at least two if not three of those players will still hear their names called by Adam Silver in the first round.

What the G League Ignite prospects lack in appropriate contextual roles or raw numbers, it does provide the chance for elite development opportunities. It serves as an interesting evaluation cycle compared to typical prospects, since the quality of opposition and flashes shown by these players gives a chance to show the higher ceilings available on these prospects compared to their same-aged NCAA peers.

Marjon Beauchamp up to 15 on the nice read defensively and finish in transition pic.twitter.com/RczsNf92hH

The G League Ignite team is not going anywhere anytime soon, and more high-profile players will take the leap as more and more lottery picks come from that path. 17-year-old Scoot Henderson is currently tearing up the G League and will be the first two-year Ignite player. He is a consensus top-two pick in the 2023’s potentially historic class. More players will follow suit and it is paving the way for more creative alternate paths to the NBA either in the model of the G League Ignite team or new ways.

The first of these alternative leagues to take form could not be more different from the G League Ignite team, which is built off of a known quantity and high competition. Overtime Elite is a flashy league based on social media engagement and highlight reels. The Atlanta-based organization has brought in big names such as former UConn championship coach Kevin Ollie and has put in significant amounts of money to pay their high school-aged players six-figure salaries to prepare for the NBA. This league skews younger as it has high school-aged players, so while it does have members of the 2022 NBA Draft class, it also has players in the 2023 and 2024 classes.

While the Overtime Elite team is going to continue to bring in big names as well as produce highlights with millions of clicks on social media, it is not the highest form of competition to evaluate a prospect against. When looking at players in the current draft class, such as this year’s Jean Montero from the Dominican Republic, he is playing against younger and inferior competition, making it nearly impossible to evaluate. Not only is the competition weaker, but the style of play is flashier, built off highlight reels making it more difficult to imagine these players playing at the next level.

Jean Montero leads all scorers with 10 as Team Overtime is up 33-23 at the HALF against Combine Academy 💪 pic.twitter.com/1ZwGATiBts

Montero is a shifty creative guard who is given a lot more room to make flashy highlight plays—as well as more mistakes. The OTE model is built around TikTok plays and Instagram Reels, so it is less substantial than players trying to win college basketball championships or competing against fringe or former NBA players in the G League. While the level of competition may not be the best, it certainly creates intrigue and allows for moments of brilliance from its players. Overtime Elite has a significant amount of money being invested into it with important players calling the shots and investing behind the scenes.

Montero will be the first of many players in the future to come from OTE and this could lay the groundwork for other similar companies to invest in young “professional athletes” on their way to the NBA. Along with Montero, twin brothers Ausar and Amen Thompson appear to be lottery picks in next year’s class from the OTE system. Other prospects will continue to test these waters and if a team does take a chance on the Dominican guard in the lottery, that will only expedite the speed at which OTE grows. Bringing in disgruntled players such as Emoni Bates or other players unhappy with their college basketball situations is another thing that will help the Overtime system to grow.

Sources: Emoni Bates will not play in Memphis' game at Cincinnati on Thursday, as his future with the program has suddenly come into question. Bates has been projected as a 2023 NBA Draft prospect and had previous contact with OTE and overseas opportunities.

While no one will know exactly how many until draft night, there are five players from the G League Ignite and Overtime Elite teams that could end up going in the first round. While these players have not necessarily helped their draft stock throughout the year, they have shown flashes of upside that may entice teams to take a risk on them. Unlike the consistency in opportunities provided for evaluation in the more traditional routes, these are less secure evaluations based on more projection due to contextual situations and changes in the level of competition. In a weaker draft class such as 2022, it is not hard to imagine a team talking themselves into a player that it thinks has a higher ceiling (with small glimpses seen), whether it was against a higher or lower level of competition.

Offering six-figure salaries to these young players and taking a school out of the equation seems like an easy model for recruiting, but top that off with lottery picks on the résumé and it will sell itself to young basketball players with NBA aspirations. Players will not stop going to play college basketball, but alternative pathways will continue to become more and more popular and this year will be a big test for those models.

»READ: The sophomore boom in the NBA draft class