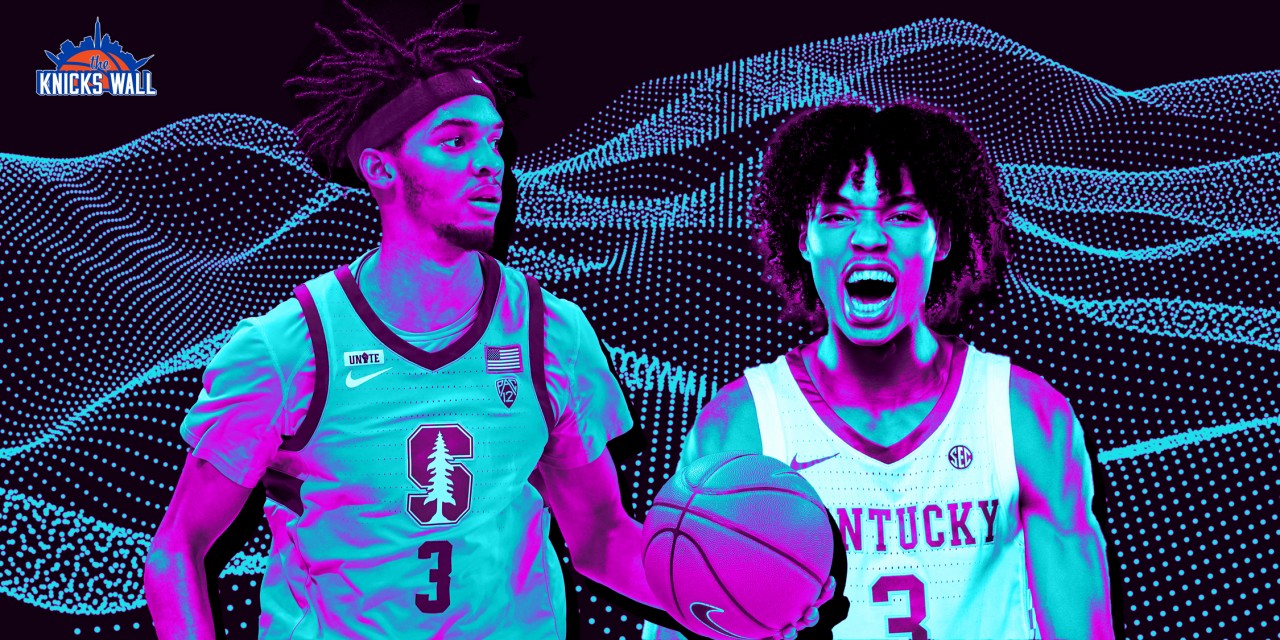 With a Julius Randle extension over the horizon and a pursuit of a superstar, the Knicks should keep both of their first-round NBA Draft picks this year.


For the first time since 2016, the New York Knicks aren’t picking in the top 10 of the NBA draft. I’m not quite sure how to feel about that. What I do know is that there’s no need to watch the NBA Draft Lottery, no need to sweat over ping-pong balls, and no need to get frustrated when the Knicks either remain in their original slot or move down. And there’s a bit of bonus compared to other seasons; thanks to the Tim Hardaway Jr. trade to Dallas, the Knicks have two first-round picks: 19th and 21st overall.

After receiving hands and feet from the Atlanta Hawks in the first round of NBA playoffs, the Knicks must now regroup and explore all options to improve their roster. Free agency will be the talk of the town as the Knicks sit back with nearly $50 million in cap space to spend. However, one popular move discussed has been to use both first-round picks to move up in the draft.

Consider me skeptical on the idea. I’m of the mind the Knicks should use their top three draft selections—picks 19, 21, 32—to attempt to improve the roster, both for now and for the future.

And while the class appears star-studded at the top, the drop-off starts about pick five or so, a range the Knicks can’t get into. The last trade involving two non-lottery picks for a lottery pick was the 2017 NBA Draft, where the Portland Trail Blazers moved the 15th and 20th selections to the Sacramento Kings for the 10th overall pick. It’s not an impossible task, but Portland had the first pick just outside the lottery, whereas New York is at 19th overall, quite a bit ways away.

So, let’s talk about why the Knicks should keep both of their first-round picks.

The One Weakness, the Knicks, Can’t Fix in Free Agency

Despite a 41-win season and homecourt advantage in the first round of the NBA playoffs, the Knicks sit with several needs on the roster. Eight of New York’s 10 top players are hitting free agency this offseason in terms of minutes. Like Immanuel Quickley and Obi Toppin, some players are ready to take an increase in minutes, and the late addition of Luca Vildoza provides a depth option in the backcourt, but the Knicks still have some work to do.

While the Knicks sit in this weird middle-class in the Eastern Conference, the pending free-agency class offers several different solutions to their problems. Point guard, perimeter depth, a proper backup center; the Knicks can properly address that in free agency, thanks to somewhere around $50 million in cap space. If the Knicks do fail in making a splash at the top of the market, there’s reasonable depth for them to address their weaknesses.

However, the Knicks lack “upside,” which is somewhat subjective. R.J. Barrett got playoff reps at 20 years old, but the next step is often the most difficult. Immanuel Quickley was an effective rookie, but he looks more like a combo guard than a point guard. In the mind of fans, Obi Toppin went from “tradable” to “maybe he should get more minutes” by the end of the season, but with Randle on the roster, his path to success feels blocked. Barrett is the only one that offers “All-Star” vibes. It’s safe to say that the Knicks could use another punt, or two, on some talent.

The dream here is Stanford forward Ziaire Williams. Williams’ stock has fluctuated between the 15-to-25 range at the moment, which could allow him to fall to New York on draft night. Though he had an up-and-down season, Williams is a 6-foot-8 swingman who has shown advanced shot creation and the willingness to create for others on offense. Combine that with solid defense and you have someone who could come in right away and contribute.

Tom Thibodeau and the Entire Use of the Franchise

One reason people seem to think the Knicks need to trade up is that head coach Tom Thibodeau will not play three rookies next season. Thibodeau, who leaned on veterans for most of last season, will go into next season with a 21-year-old (Barrett), 22-year-old (Quickley) and two 24-year-olds (Robinson, Toppin) next season, so adding more young players is simply out of the question. Maybe one, but we’re pushing it with the addition of two players under the age of 22.

I agree with the overall point. However, the Knicks should use this as a time to further push the use of the Westchester Knicks, New York’s G League team. Due to the truncated season, the Westchester Knicks were used more for positive cap macerations than player development. This season, the Knicks could use the G League as a tool to continue the development of players who need more minutes as they remain on the outside looking in of Thibodeau’s rotation.

This is a viable option for Kentucky forward BJ Boston. Entering the NCAA season as a potential top-10 pick, Boston had an up-and-down season for the Wildcats, finishing with averages of 11.5 points, 4.5 rebounds, 1.6 assists, and 35.5% shooting. Boston looked out of his depths at times, but he’s also a 6-foot-7 wing coming from a school that’s gaining a bit of a reputation for suppressing secondary skills. Players like Devin Booker, Jamal Murray, Bam Adebayo, Tyler Herro, Keldon Johnson, Shai Gilgeous-Alexander, and P.J. Washington are all prime examples.

Maybe Boston is a better creator than we thought; maybe he improves into a good enough shot-maker and becomes a 3-and-D guy. Maybe, he is what he is. For the New York Knicks, using the 21st overall pick, giving him some Summer League and preseason looks before sending him off to Westchester is an excellent risk that could have a huge payoff shortly.

Brooklyn Nets general manager Sean Marks will win the Executive of the Year award, but I want to give a shout to Philadelphia’s President of Basketball Operations Daryl Morey for his work. Morey turned Al Horford into Danny Green without giving up a first-round pick, flipped Josh Richardson to Dallas for Seth Curry, hired Doc Rivers, and then traded for George Hill at the trade deadline. The moves were to build a better shooting squad around the one-two punch of Ben Simmons and Joel Embiid.

The 2020 NBA Draft is what I want to highlight here. With three picks, the Sixers added three players that can assist their roster for the long term. With the 21st pick, Philadelphia selected Tyrese Maxey, a solid rim-running guard who had some moments as a rookie. With the 49th overall pick, Isaiah Joe was selected. Joe only played 383 minutes but shot 36.8% from the outside and offers the Sixers a young, affordable wing.

With the 58th overall selection, the Sixers took Paul Reed, who took a noticeable tumble on draft day after being viewed as a late first-round talent. Reed started on a two-way deal before dominating the G League, averaging 22.3 points, 11.9 rebounds, 2.3 assists, 2.0 steals, 1.8 blocks, and winning the league’s MVP award. Morey swiftly signed him to a proper contract, and Rivers gave him 177 minutes near the end of the season.

Maxey, Joe, and Reed finished outside the top 10 minutes for the Sixers, but they offer so much more for Philadelphia’s future. Reed offers a backup center option they could use behind Embiid, while Joe has 3-and-D wing potential at 21 years old. Maxey could see the perfect point guard provide rim pressure in non-Simmons lineups. Most importantly, they offer cheap pieces to build around if and when Philadelphia makes their next big acquisition.

With names like C.J. McCollum, Damian Lillard, and Malcolm Brogdon available on the trade market, Philadelphia could make a considerable splash. A theoretical Lillard-to-Philadelphia trade might cost Simmons, but acquiring McCollum or Brogdon would cost a bit less, something in the range of Maxey, Matisse Thybulle and draft picks to start before we talk matching salaries, most likely Tobias Harris.

One of the main issues with the Knicks trading for Lillard is the potential inclusion of R.J. Barrett. Barrett makes sense as a piece the Blazers want in return, but it doesn’t make much sense for the Knicks to do that, on top of the likes of Quickley and Toppin also being in the deal. New York ends up with Lillard and Randle, but that doesn’t seem like a team that could contend with the likes of Philadelphia, Milwaukee, and Brooklyn.

Philadephia’s roster is much more geared up for a big trade, while the Knicks fall short. With two first-round picks, the Knicks could take a bit of a longer view here. Maybe adding two more young players into the organization, plus giving Toppin and Quickley more minutes next season puts New York in place to add a star without completely emptying the roster.

The Sixers failed to get James Harden but currently feel like the ideal team for a Lillard trade, as they could take the talent from the top of their roster and move them, while still maintaining decent depth and assets for a potential championship run. The Knicks feel a step or two away, and maybe those draft picks can help close the gap before making a big, franchise-altering move.

The New York Knicks could use talent and have several avenues to add it. One way is with their draft picks. With three picks in the top 32, New York should avoid trading up, instead, the newfound Eastern Conference contender should make selections with their 19th and 21st picks in the 2021 NBA Draft. Both picks offer New York the chance to add more upside to the roster without spending absorbant money in free agency for it.

It offers a chance to strengthen their development pipeline from Westchester to Manhattan and most importantly, it offers New York new assets that allow them to reassess and reevaluate their assets before making a star trade.

»READ: What does the future hold for Mitchell Robinson and the Knicks?