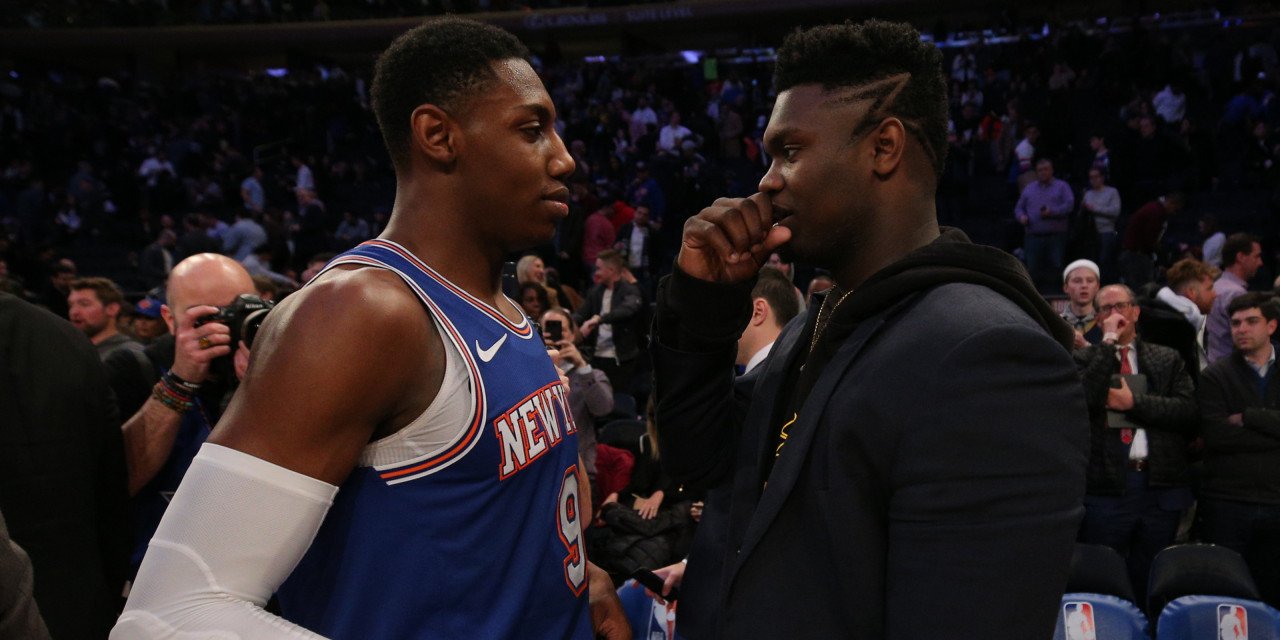 With a report skeptical of Zion Williamson signing a max contract with current team Pelicans, could the Knicks swoop in, pay the oft-injured power forward, and pair him with teammate and friend RJ Barrett?

The call to action may finally be on the horizon.

For years, five if you are keeping count at home, the front office of the New York Knicks has preached two things: patience and flexibility. Every summer since Scott Perry was hired as general manager in 2017, the Knicks have taken a frugal approach to free agency. The frugal spending was being strategically down so that the team could build an asset chest strong enough to swing a blockbuster trade.

As the years have gone on, prospective stars have fallen off the radar: Kevin Durant, Kyrie Irving, Kawhi Leonard, Devin Booker, and so on. Donovan Mitchell has become the new target of choice. The worst kept secret in an otherwise tight-lipped front office is that the team is waiting to pounce. Mitchell would come to New York at a premium price. The Utah Jazz do not have to rush to get a deal done with Mitchell under club control for three years.

Then there is Zion Williamson. On its face, Zion to the Knicks sounds as farfetched as a Mitchell homecoming. New Orleans has not scratched the surface of what Williamson could be for their team, having appeared in just 38% of possible games. That is not to mention the clear lack of desire Zion has shown in the Pelicans, he had to be bullied into welcoming C.J. McCollum to New Orleans.

The lack of faith from the team, whether it is purely injury concerns or a mix of injury concerns and lack of enthusiasm, the Pelicans will not hand Williamson a blank check. Pelicans owner Gayle Benson plans to take a “football approach” to contract negotiations. For Zion, that means a Joel Embiid–type rookie extension. Embiid had an incentive-laden $148 million that had the potential to reach $178 million.

In Embiid’s case, there was a clear commitment on both ends, something that feels to be missing in New Orleans. If the Pelicans are going to commit nearly $200 million to someone, they have to be sure they are buying into the long-term vision.

The friction, heightened by media scrutiny or not, gives the Knicks an opportunity. New York has plenty to offer Williamson, other than playing at Madison Square Garden. And if you want to know how much Zion loves playing at MSG, let the glow speak for itself…

RJ’s recruiting pitch to Zion is going to be the easiest phone call of all time pic.twitter.com/n3iimNF3Kz

While the Pelicans may not be willing to gamble on Zion Williamson’s future, the Knicks would not blink at throwing $200 million his way. Those doubts are the opportunity the Knicks need to show interest. Zion’s family does not like New Orleans, which means odds are that Zion isn’t an avid fan of the Bayou either.

A move to New York City to reunite Zion with college teammates RJ Barrett and Cam Reddish on the other hand sounds quite appealing.

The Pelicans will do—and should do—everything in their power to keep Williamson. But if the sense is he will collect his money while keeping a wandering eye, why not move on sooner than later. The Knicks can offer whatever Pelicans team president David Griffin desires. Every available draft pick is a no-brainer. Julius Randle is not star bait, but he can be utilized in a few ways to facilitate a Zion blockbuster.

The ideal route is for the Pelicans to take him back in a deal. Randle is not a massive downgrade, and alongside McCollum, Brandon Ingram, and a solid supporting cast, the team could remain competitive while adding draft picks and other a mix and match of whichever young players.

The roundabout route is using Randle to move up in the draft. Portland is looking to remain competitive with Damian Lillard and would move seven for a win-now player. Randle and maybe even Evan Fournier can fit the bill. Randle’s bulldozing style would mesh better with Lillard’s long-distance flamethrowing.

Even more ambitious is using Randle to entice the Kings, who are bizarrely in the same frame of mind as the Blazers. Landing the fourth overall pick would greatly improve the chances the Pelicans can talk themselves into moving on.

If by some divine miracle the Knicks can be in a position to pull the trigger, the front office will be tempting fate. The franchise has been a brilliant example of Murphy’s Law when it comes to making major transactions. Zion Williamson is an amazing talent with legitimate injury and longevity concerns. The concerns, while valid, do not outweigh the allure of having a presence like Zion. When he is right, Zion is a world-beater, shooting 60.4% from the floor in 85 career games.

The Knicks have already conveniently reunited two-thirds of the 2018–19 Duke Blue Devils’ Big 3. Just as it was at Duke, Barrett has taken on the leadership role in New York. Cam Reddish has much to prove in New York but could play himself into a role if he proves to live up to his two-way potential. In the limited minutes he and Barrett shared last season, those flashes popped off the screen more than in the sparse minutes Reddish logged with his other new teammates.

The Zion-Barrett reunion would be the core mission. While Zion and Randle bear resemblance in appearance and preferred scoring methods, the “issue” with Randle and Barrett co-existing consistently is Randle’s desire to control the ball more. Given their history, it is easier to imagine Zion and Barrett meshing better. Barrett’s ascension felt real this year, it is not unrealistic to forecast 25 points per game in the near future. Add that with a force of nature that has not been stopped when he has been on the floor, and you have two franchise pillars that can turn into something.

There would be jokes and cynicism that would come with Zion Williamson. That is where Leon Rose must cancel out the noise and treat this deal like any other: assess the upside, the downside, and make the trade.

When that assessment is done, it will show that when you can add one of the best basketball players under 24 years old, you do it.

»READ: 3 players not named Donovan Mitchell the Knicks could target from playoff teams