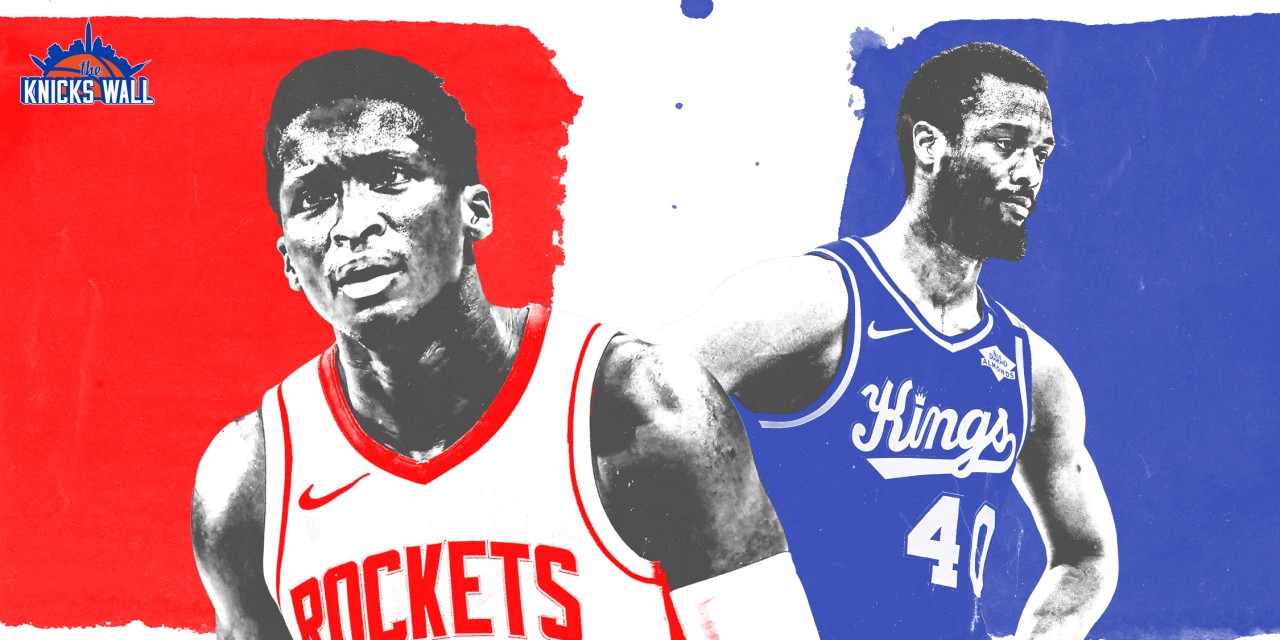 It goes without saying that the Knicks could improve from three-point range. Looking at perimeter players at the NBA trade deadline is a must.

When examining the New York Knicks and the prospects of the NBA trade deadline, things appear to be lackluster. SNY’s Ian Begley reported early last week that the Knicks aren’t “aggressive” when looking to add or offload players ahead of the March 25th deadline. The Knicks will eventually look for a star player, but the prospect of adding one revolves more around the offseason. They could sell some pieces, but with the tantalizing sights set on making the playoffs, it’s tough to see the Knicks go that direction as well.

New York’s best bet is to operate somewhere in the middle—consider buying and selling. Though starters, New York should consider deals for Elfrid Payton and Reggie Bullock. Both are free agents at the end of the year, and if the Knicks could flip both for future second-round draft picks, it would be in New York’s best interest. Austin Rivers and Kevin Knox, two players currently outside of Tom Thibodeau’s rotation, make sense as tradable players as well.

The “buy” part is a bit trickier for the Knicks. The value isn’t there for players, but there is value out there if you look enough. The frontcourt seems solidified for the foreseeable future with R.J. Barrett, Julius Randle, and Mitchell Robinson—essentially, two of the team’s best young players, and their lone All-Star this year. The backcourt, however, could use an upgrade. If the Knicks are going to buy at the deadline, a wing player makes the most sense.

The reason the Knicks need a perimeter player is the current roster lacks a long-term plan when it comes to the backcourt. Everyone needs a 3-and-D wing player, whether it be one to start or one for the bench. The Knicks could just use one, period.

Alec Burks with the And 1 on the sweet mid range jumper pic.twitter.com/7lw3b5bBvM

Bullock feels like a sellable player while Alec Burks is more offense than defense in his career. Frank Ntilikina remains a peculiar case. Some nights, Ntilikina looks like a solid 3-and-D player who can fit alongside the likes of Randle and Barrett. Other nights, he struggles to produce much of anything, and it seems like he’s in his final year as a Knick. It remains to be seen whether he can lock into a spot in Tom Thibodeau’s rotation or not.

Bullock and Burks are free agents at the end of the season; Ntilikina is a restricted free agent, allowing them to retain his rights for another year if need be.

Making a trade requires the use of New York’s assets, something of which they have plenty. New York has a sizable amount of cap space to play with right now—about $15.3 million—and around $40 million in cap space this offseason. In theory, they could take someone’s bad contract to lower the price for a player they really want or use that $15 million to make a lopsided deal. New York has three picks in this year’s draft alongside the cap space, including two first-round picks this year and three first-rounders between the 2022 and 2023 NBA Draft.

Before we jump into some names the Knicks should pursue, I want to give Lonzo Ball his own space here. TKW’s Mike Cortez already wrote an excellent piece on the former UCLA product, so I don’t want to echo the sentiment. Ball would be a great addition to a Knicks team that could use another shooter and passer incorporated into the offense. If he’s available, the Knicks should attempt to snatch him up, and at 23 years old, Ball would be a solid long-term piece for the Knicks.

Who should the Knicks pursue?

The Knicks can pursue a handful of names, but the price may be way too high. With a glance at Tankathon and the lottery, we see the likes of Orlando (Evan Fournier), Minnesota (Malik Beasley), and Toronto (Norman Powell), all of which would be excellent fits. Two names intrigue me: Washington’s Troy Brown Jr. and New Orleans’ Josh Hart.

Four years into the league and Hart has been a solid player—a hellacious rebounder for a guard (9.4 rebounds per 36 this season), an intelligent team defender, and currently a 68.4% shooter at the rim. Hart’s problem is that he hasn’t become the shooter many envisioned, at just 32% from the outside this season. Still, Hart can come in right away and play both wing spots for the Knicks, and be a solid contributor under Thibodeau.

As for Brown Jr., consider him a swing for upside. This season, the former Oregon swingman has found himself plastered to the bench, which has hurt his numbers (4.1 points, 3.0 rebounds, 45.3 True Shooting percentage). However, he was on the right track just 12 months ago—10.4 points, 5.6 rebounds, and 52.4 TS%, and he’s still just 21 years old. What attracts me to Brown’s game is his ability to move the ball, averaging 3.6 assists per 36 minutes.

Ideally, Brown comes in, snags a rotation spot, and offers value as a second unit creator. He shouldn’t cost too much in a trade, so it’s a bet that you can “fix” his game. If you can, the Knicks would have restricted rights, allowing them to keep him for the next four years. If he doesn’t connect with Thibodeau, it’s a small move that doesn’t harm the franchise. The Knicks would be wise to use one of their future second-round picks to take a punt on Brown.

One more name to keep an eye on, not for the deadline but for the offseason, is Indiana guard Malcolm Brogdon. He’s a bit older (28) but an elite shooter (39.1% from three) and a stable ball-handler. The Pacers could look to keep him and run it back with their top four guys, but I would make a call to see what the price is as he enters year three of a four-year deal. Brogdon might not be a star, per se, but could take New York up a level or two.

Who would I call on?

If I were Leon Rose and running the Knicks, I would ask about Atlanta’s Kevin Huerter. We’ve mentioned Huerter before here at TKW, but he’d be an excellent fit. The third-year swingman out of Maryland has been a knockdown shooter since coming into the league and is currently shooting 36.4% on 5.9 attempts. With Atlanta stuck between navigating their big free-agent additions, getting minutes for their young core, and moving John Collins, I would call and check on the New York native’s availability.

Huerter also fits a solid profile for New York and their offensive needs. Huerter’s field goal percentage is below-average (42.4% this season) but excels at MoreyBall shots (64.0% at the rim, 36.4% from three). At 6-foot-7, he doesn’t have elite defensive tools but has good size to pester smaller guards. And then you have the passing: he’s currently averaging 4.2 assists per 36 minutes, and a 17.0 assist rate suggests that he has a bit more upside as a creator, as well.

At 22 years old, Huerter would be an excellent addition to New York’s young core. Putting him alongside Barrett would give the Knicks a formidable wing pairing for the next few years. He takes the scoring and spacing pressure off Immanuel Quickley in a hypothetical pairing and offers another cutter off-ball when Randle is orchestrating the offense. In a perfect world, the Knicks acquire Huerter, keep Barrett, Randle, and Quickley, and then go into the offseason and add on top of that.

His price would be interesting. Personally, I’m keeping Randle, Barrett, and Quickley out of this deal, and the Hawks don’t need another rim protector, which could keep Mitchell Robinson out as well. This is a scenario where the Knicks should consider moving one of their two first-round picks this year—adding a hypothetical starter into the mix, but I’m not quite sure that gets it done.

Would you be open to Obi Toppin and the Mavericks pick for Huerter? Effectively moving two picks for Huerter, who will require an extension in 18 months? It remains to be seen.

When it comes to additions to the roster, the New York Knicks are better off waiting until the offseason, where they can use their draft picks to add upside to the roster and free agency to plug current holes. With the Knicks appearing to be well ahead of schedule, they might be able to pursue some high-level players at the top of the market.

However, I think the Knicks should be aggressive and pursue a perimeter player with years of control to help the roster. With Bullock and Burks entering unrestricted free agency, and Ntilikina on the border of the rotation, New York will most likely be with Barrett as the lone wing in the long-term planning. In a league where perimeter players rule, that cannot happen.

As we draw closer to the trade deadline, the Knicks should survey the landscape for someone who can play on the wing. From a punt like Troy Brown Jr. to an excellent fit like Kevin Huerter, the Knicks have the cap space and draft picks to be expansive here and should pursue someone who can be added to Barrett in their long-term wing plans.