Knicks Shrink Down the Stretch to Trae Young, Hawks 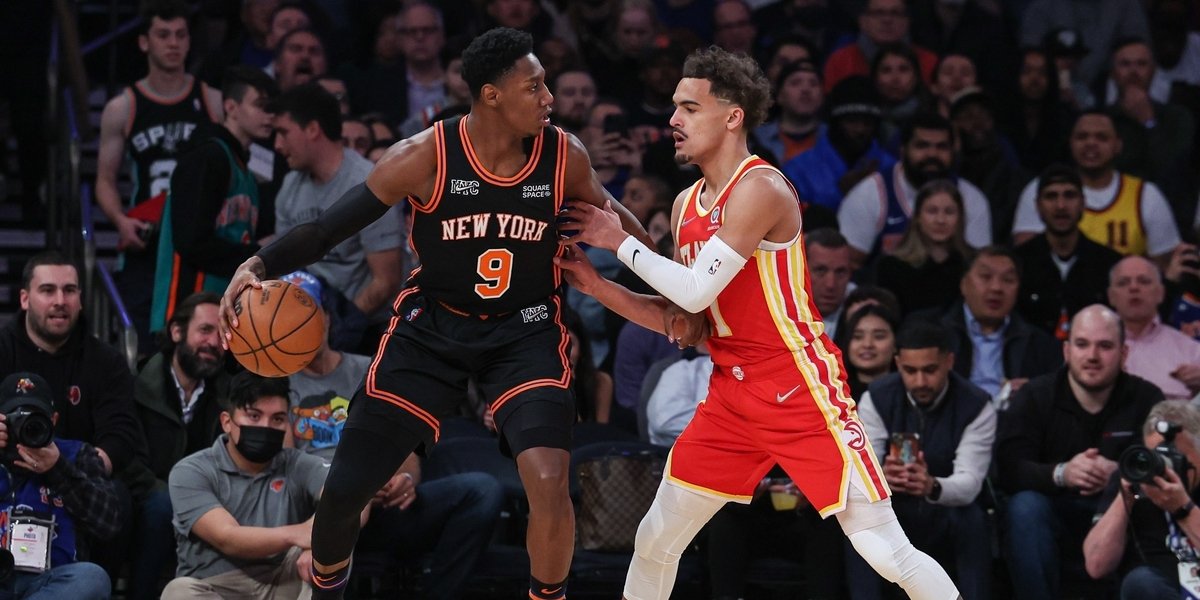 Trae Young, in his first game back at the Garden following last year’s playoffs, displayed why he’s still Knicks fans’ number one villain, with the Hawks effectively eliminating New York from play-in contention.

The New York Knicks (30-42) dropped a huge game to the Atlanta Hawks (36-36) by a final score of 117-111 at Madison Square Garden on Tuesday night. After they entered the fourth with momentum on their side, the Knicks had another late-game collapse that they could not repair.

This was a must-win game for New York as they continue to fight for one of two play-in spots as the season winds down and as they sit five games back of the Hawks for the 10th seed. If they lost, it meant they’d clinch a losing season and all but seal their fate for missing the playoffs after an appearance a year ago.

The Knicks had dropped a game to the Utah Jazz at home on Sunday, and it was further marred by a late-game skirmish between Julius Randle and Jazz center Rudy Gobert. So, a victory was sorely needed to try and regain momentum as New York is in the home stretch of the regular season.

Julius Randle was ruled out of tonight’s game with a sore right quadriceps tendon and is day to day, per coach Tom Thibodeau, which gave Obi Toppin the green light to start for the first time since Randle was out due to health and safety protocols in December.

The first quarter opened with very little offense. With neither team finding their jump shot early, the Knicks and Hawks decided to try and exploit each other’s defense at the rim. After a slow start, Atlanta was able to get anything they wanted against New York, especially in transition. Meanwhile, New York seemed sluggish with no true direction on who to run plays through. But RJ Barrett looked aggressive in his opening minutes with some strong drives to the basket to keep the Knicks involved offensively. Once he got going, the rest of the Knicks seemed to follow along and they were able to exploit holes in the Hawks’ defense for the rest of the quarter.

By the end of the period, New York was up by four, led by 12 points and four rebounds from Barrett.

The second period started with a bang from the Knicks with a three-pointer from veteran Taj Gibson. After that, though, the Knicks’ entire bench unit was unable to stop the Hawks’ Bogdanovic from going on a streak, hitting two threes and a tough bank shot to get Atlanta back to within four of New York’s lead. After that brief heater from Bogdanovic, both teams struggled to find an offensive rhythm with Trae Young and Barrett both on the bench. Once they returned, Barrett was able to get a few great lobs up to Toppin, but Young was able to answer with two big threes that put Atlanta back up by three. Young just continued to pour it on as the quarter winded down, and the Knicks ended up down six at the end of the first half.

The Knicks had to figure out how to lock down Trae Young if they wanted to try and retake the lead from the Hawks early in the third quarter. When they started to double Young, though, it left other Hawks like Kevin Huerter open for shots. Thanks to the aggressive rim presence of Toppin and Mitchell Robinson and a three from Barrett, New York was able to make up for those defensive lapses and get back to within five of Atlanta. It felt like with every big shot or foul drawn by Atlanta, New York was able to respond down at the other end of the court. The ball was zipping around for the Bockers, and their defense was clamping down at the right time. With just under a minute left in the quarter, the Knicks had regained the lead over the Hawks. They headed into the fourth with a two-point advantage in a must-win game.

New York and Atlanta appeared stagnant to open the final period regulation. Poor shot selection and questionable possessions were plaguing both squads. Once RJ Barrett started to force himself to the basket, the Knicks looked far more cohesive on offense. Their defense was locking the Hawks down, which helped them to gain an even bigger lead with just over nine minutes left in the quarter after a three-pointer from Immanuel Quickley. Atlanta didn’t score until the nine-minute mark of the fourth, which was a testament to the gritty defense with which New York was playing in crunch time.

Unfortunately, momentum began to shift in the Hawks’ favor with just over two minutes left, especially with the disappearance of Barrett’s offensive attack, and they pulled away after huge shots by Bogdanovic and De’Andre Hunter. They ended up winning the game by six, sealing the Knicks’ sub-.500 record on the season and making the play-in race even more unrealistic.

RJ Barrett was New York’s top performer in their loss with 30 points, 13 rebounds, and three assists. Alec Burks contributed 21 points and four assists, and Evan Fournier had 11 points and four assists. Obi Toppin, who got the start tonight with Randle out, had 10 points, seven rebounds, and three assists. Mitchell Robinson grabbed six rebounds and recorded four blocks along with scoring nine.

New York will hit the road once again to face the Charlotte Hornets tomorrow night in Charlotte. While a win could help their chances at attaining a play-in spot, their loss tonight makes that road even harder to traverse.