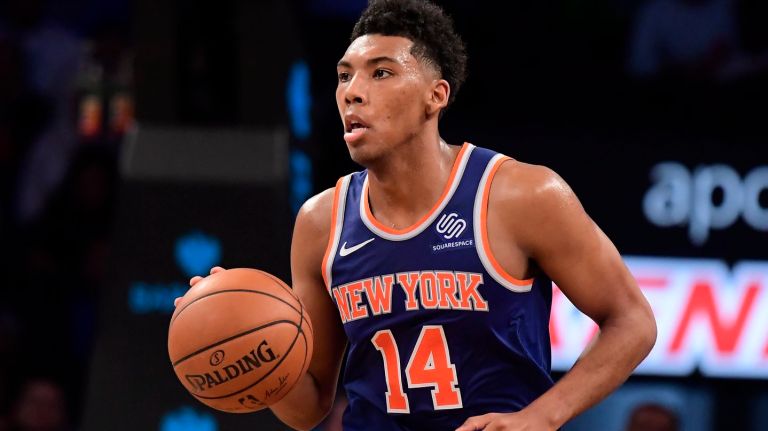 The undrafted rookie Allonzo Trier inks a two-year deal to stay with the Knicks while the team must release former undrafted free agent Ron Baker.

On Thursday morning, The Athletic’s Shams Charania reported the New York Knicks will sign undrafted free agent Allonzo Trier—whose 45-day two-way G League deal with the team was set to expire—to a two-year contract. In a corresponding move, the team will release guard Ron Baker. The report was confirmed by NorthJersey.com’s Chris Iseman.

Trier has been a breakout rookie for the Knicks through 27 games. The former Arizona Wildcat guard is averaging 11.3 points, 3.1 rebounds, and 1.9 assists in 23.3 minutes per game on 47 percent shooting from the field and 39.1 percent from three-point range (per Basketball-Reference). Currently sidelined with a hamstring injury, Trier has been a dynamic force off the bench for the ‘Bockers as a versatile combo guard with promising slashing and finishing ability—a quality the team lacks beyond veteran Tim Hardaway Jr., the injured Trey Burke, and fellow rookie Kevin Knox.

Ron Baker was signed by the Knicks in the summer of 2016 after going undrafted following a four-year collegiate career at Wichita State University. The next summer, Baker signed a two-year deal with a player option in the second year; the guard exercised the option last May without testing the free-agent waters as his second half of the season was cut short with a torn labrum injury.

When someone tells me Allonzo Trier went undrafted pic.twitter.com/gnqukYpZY6

Speculation the last week swirled about whether Trier would be with the Knicks long-term after the team could sign him beyond his two-way contract. As New York commits to the encouraging Allonzo, Scott Perry and the organization has answered affirmatively and brazenly that they believe Trier can be a piece for their young, developing team alongside franchise cornerstone Kristaps Porzingis (rehabilitating from an ACL tear), forward Kevin Knox, second-year guard Frank Ntilikina, and second-round pick Mitchell Robinson.

Seemingly, Perry and the Knicks trust their scouting and early on-court performances from the 2018 draft class with Knox, Robinson, and now Trier inking contracts beyond the 2018–19 season (with Knox and Robinson scaled to team-friendly rookie deals already).

Trier is a candidate to make the Rising Stars team in February and even one of the All-Rookie teams come end of the year. He was suspended while at Arizona for a failed drug test, which Trier explained was due to the proximity of the test close to the first failed one. After averaging 16.8 points, 3.7 rebounds, and 2.4 assists at Arizona, Allonzo declared for the draft but found no takers among the Knicks and 29 other teams.

Since then, Trier has proved doubters vehemently wrong. The 22-year-old—who turns 23 next month—has sliced and diced competition one third of his way through his rookie campaign and has appeared closer to a seasoned vet than a wide-eyed rookie.

ESPN’s Ian Begley has reported Trier’s deal with the Knicks is worth $7 million and the team owns an option in the second year.

Allonzo Trier's two-year contract is for $7 million and has a team option for the second year, per ESPN sources. Ron Baker will be waived to make room for Trier.

Charania added the Knicks are signing Trier to their bi-annual exception: