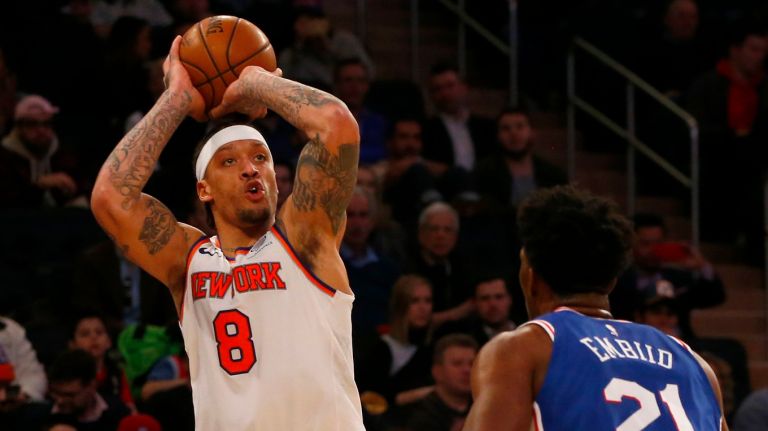 Despite holding a lead for a good chunk of the game, the Knicks Knick’d and got the short end of the stick on Thursday night.

Then, the second half came.

While the Third Quarter of Doom™ didn’t quite strike the Knicks tonight, it was the fourth quarter where they fell apart. New York scored NINETEEN points in the final period. 19. That’s it.

If you skipped on March Madness to watch this game like I did, you saw some ugly basketball. If you didn’t, good for you. Let’s get into it.

The Knickerbockers were able to get off to such a great start and hang on until the bitter end thanks to a team effort in scoring the basketball. Six Knicks put up double digit points, and the team as a whole shot 52 percent from the field.

Walking Bucket Beasley, who put up 24 points along with 13 boards and seven assists, and Kyle O’Quinn, who dropped 15 and 10, made their mark against Philly. Along with Trey Burke, they were the best players to go to when the Knicks needed a bucket.

Playing good team basketball is when this New York team is at their best. Although they were unable to close out the game, because #Knicks, they showed that when they don’t have to rely on a single player to keep them in the game, they play far better and are able to duke it out against playoff squads.

Managing Minutes of the Young Guards

One of Jeff Hornacek’s most important jobs down the stretch of the season has been figuring out how to manage minutes between New York’s three young playmakers. Burke, Frank Ntilikina, and Emmanuel Mudiay have all performed well as of late, but giving them all solid minutes every night is impossible, so finding the right balance of playing time between the trio is crucial.

Tonight it was Frank who got the short end of the stick. Coming off a four point game against Dallas in which he shot 2-of-8 from the field, Ntilikina only saw 13 minutes of playing time as the more efficient Burke and Mudiay got 25 and 28 minutes respectively. Burke especially had a standout game, dropping 16 points on 7-of-11 shooting in another productive performance.

While Burke and Mudiay have been doing well, it’d be nice to see Frank get some consistent minutes.  The Knicks have nothing to lose at this point, so developing their (now possible) eighth overall pick should be a top priority.

• Jarrett Jack picked up another DNP tonight, and continues to be a pro about it. Jack is constantly one of the most vocal on the bench, encouraging his teammates and offering advice to the young guys throughout the game.

• Enes Kanter picked up another double-double tonight, his 32nd of the season.

• Embiid is a monster. That is all.

After tonight’s game, New York moved ahead of the Chicago Bulls for the 8th spot in the lottery standings. The Knicks next game will come against the Hornets on Saturday.