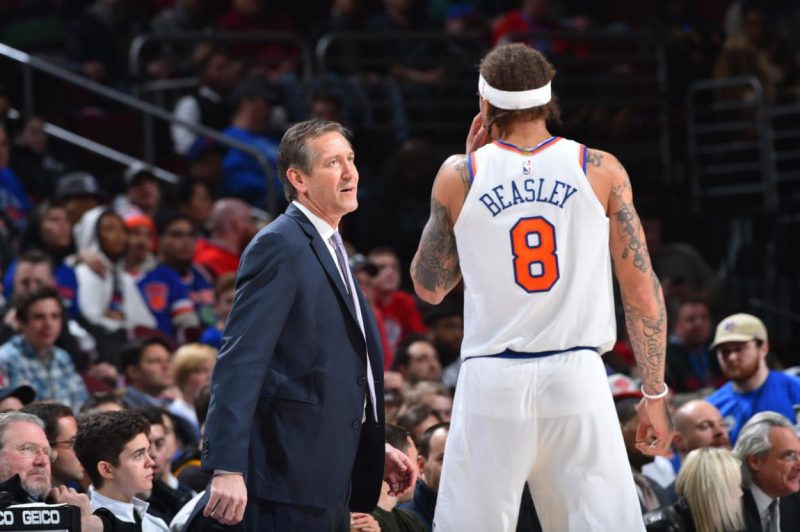 The Knicks continued their slide against the Sixers on Monday night, with life post-KP proving to be incredibly difficult.

With Sixers legend Allen Iverson on hand tonight, Joel Embiid, Ben Simmons, and company dominated the trainwreck we commonly to refer to as the Knicks, 108–92. It was an all around great performance from a variety of 76ers, led by Dario Saric, who poured in 24 points. Even second string point guard T.J. McConnell messed around and nearly posted a quadruple double with 10 points, 10 rebounds, 11 assists and six steals. It was another dreary and discouraging night for New York on both ends of the floor as they were simply outclassed by a superior Philadelphia squad. Even when the Knicks cut the lead to only two points at halftime after being down double digits, there was never really a strong sense that New York could pull this one out on the road, where they are an atrocious 7–23 this season.

The downfall of the Knicks during their recent slide and especially tonight has been the subpar play of the Knicks guards. Tim Hardaway Jr., the most lethal scorer the Knicks have left from the perimeter, has been terrible over the last few weeks and only shot 25 percent from the field this evening. THJ has bottomed out and has scored in single digits seven of the last eight games. With no KP and THJ struggling mightily, there aren’t many other reliable options in terms of offense for New York from the outside.

In addition to Timmy’s struggles, the Knicks trio of point guards (not including Trey Burke, who only played four minutes) was average at best tonight. All eyes were on the newly acquired Emmanuel Mudiay, and he was decent in his second game as a Knick since being traded from the Denver Nuggets. It’s important to remember Mudiay is only 21 years old and still has a lot of growing to do, so he deserves somewhat of a pass for now. As for Jarrett Jack and Frank Ntilikina, they didn’t fare as well as Mudiay this evening, combining for a total of zero assists in the 38 minutes between them. That stat is unacceptable from a duo of point guards whose job is to distribute the rock. Frank seems to have hit the rookie wall and has looked the part of a 19-year-old rookie during the Knicks seven-game losing skid.

New York is at the point where they need significant contributions from the backcourt on a nightly basis in order to be competitive in any game. Without their All-Star to bail them out, a lot of the offensive deficiencies that he masked are now starting to be exposed. With the backcourt struggling so much, it puts a lot of pressure on Beasley and Kanter to shoulder much of the offensive load, which is not a recipe for success on the majority of nights. It is important for the Knicks’ guards to play more aggressively, knock down shots, and be less careless with the ball. It sounds simple, but their lack of confidence is detrimental to the squad.

At this point in the season, the best course of action for the Knicks seems to be to get the highest draft pick as possible, rather than chase their pipe dream of making the playoffs. Watching the former tanking expert Sixers come out with a plethora of young and talented players and fielding a very good team after years of being the laughing stock of the NBA has to catch the eye of the Knicks coaching staff and front office. One could only hope that Jeff Hornacek and Scott Perry put the final nail in the coffin toward effectively throwing this season into the tank.

The Knicks are back on the floor on Valentine’s Day at MSG against the Washington Wizards.