Knicks, Sixers Rematch at the Garden on Black Friday 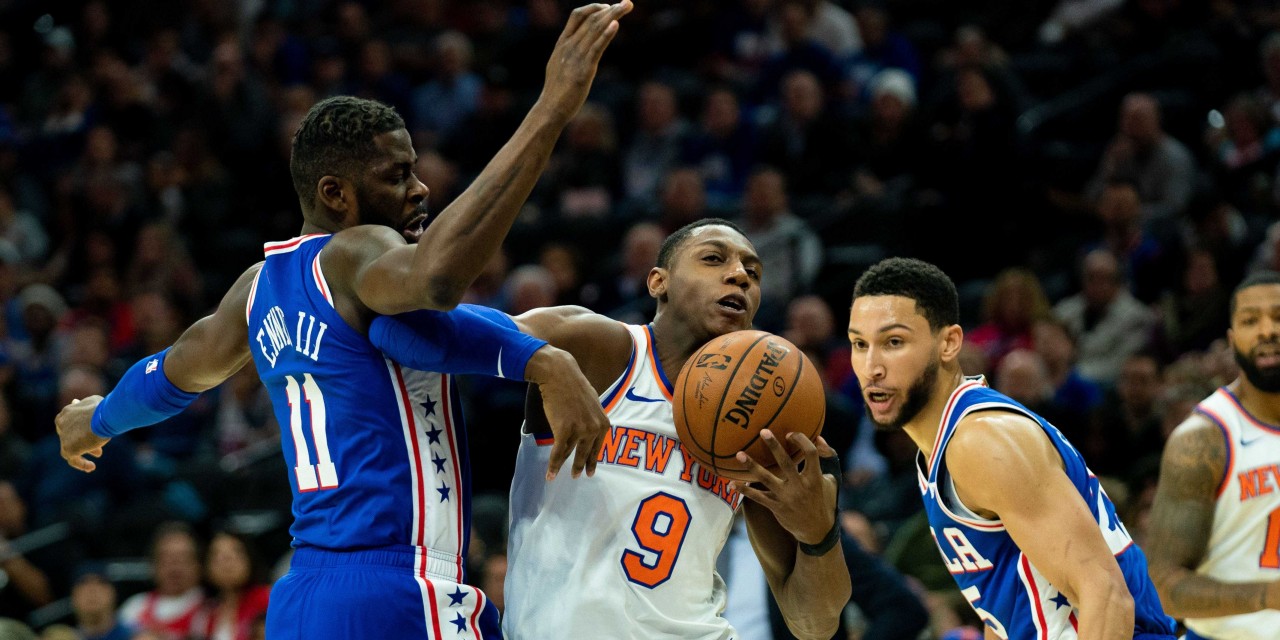 A week after losing a late lead to the Sixers in Philly, the Knicks return home for a post-Thanksgiving rematch with their division rival.

After a solid Thanksgiving meal, the New York Knicks and Philadelphia 76ers are back in action on Friday night, facing off at Madison Square Garden.

The Knicks (4-14) lost their first and previous matchup with Philadelphia on November 20th, falling 109-104, after a second half collapse. New York led by as high as 17 points in the third quarter, before Philadelphia chipped away and overtook the lead late in the game. Last season, the Sixers swept the season series, taking all four meetings. The Knicks will try to prevent a similar outcome.

Philadelphia (12-6) enters Friday night after winning five of its last six games. The Sixers bounced back with a close win at home on Wednesday night, following a loss in Toronto earlier in the week.

As for New York, it is trying to break a four-game losing streak. Following three-straight close losses, the Knicks were recently manhandled by the defending champion Toronto Raptors on Wednesday.

As good as the Sixers may be—coming in with a top-five record in the Eastern Conference and boasting a couple of different All-Stars—they are a different team outside of the comfort of their own arena. Sure, it’s expected that a team usually performs better at home, but Philly is drastically different outside of the Wells Fargo Center.

At home, the Sixers are undefeated with an 8-0 record. On the road, they are only 4-6. Considering how the Knicks were able to hang with Philly just over a week ago and lead by as high as 17 in the third quarter, it’s not unreasonable to expect that it could be another close one, especially with Philly going on the road to face New York this time. While blown leads and slow starts have become the Knicks’ M.O., it’ll be interesting to see them get another crack at the Sixers.

Last time they faced each other, Philadelphia found tremendous success pummeling the Knicks inside, following the lead of Joel Embiid and Ben Simmons. Embiid had 23 points, 12 boards, and five assists. Meanwhile, Simmons had 18 points on an efficient 7-of-9 shooting performance, with six rebounds and 13 assists. Simmons also made a rare three-pointer in the win, and that probably was a sign that it wasn’t going to be the Knicks’ night.

The Toronto game wasn’t a pretty one for the Knicks on a variety of levels. Besides extending their losing streak to four games and losing by 28 points, the Knicks only shot 37.5% overall and an ugly 29.3% from long range.

Pascal Siakam gouged the Knicks for 31 points, and the Raptors had six other players score in double figures.

The three-ball was a huge reason for why the Knicks were able to hang with the Sixers and even lead them by double figures in their previous meeting. As a team, New York shot well, draining over half of its attempts from beyond the arc.

Marcus Morris had just seven points in the Toronto loss; expect the Knicks’ top scorer to lead a much-improved showing this time out, individually but also team-wide, as the Knicks look to end their four-game skid.

With only Julius Randle and R.J. Barrett the only ones able to deal some damage—albeit not that efficiently to Toronto’s credit—it’s clear that the Knicks struggle with their leader, especially when no one else steps up to help the top guys. It was the fewest amount of points that Morris had scored since another 20-plus point loss to Cleveland, where he only had nine points.

Out of the Doghouse?

After being regarded as an undrafted gem last season, Allonzo Trier has since been relegated to the end of the bench.

“Iso Zo” hasn’t received many opportunities this season, but he hasn’t lost his scoring touch.

During the loss to Toronto, he entered for the final seven minutes of play. He quickly heated up and finished with 10 points over that final stretch. In a game that no other Knick was able to really get into a groove against the Raptors, Trier campaigned for more minutes with his play.

Will Fizdale allow his diamond in the rough to shine with more minutes, or does he remain a fixture on the bench?