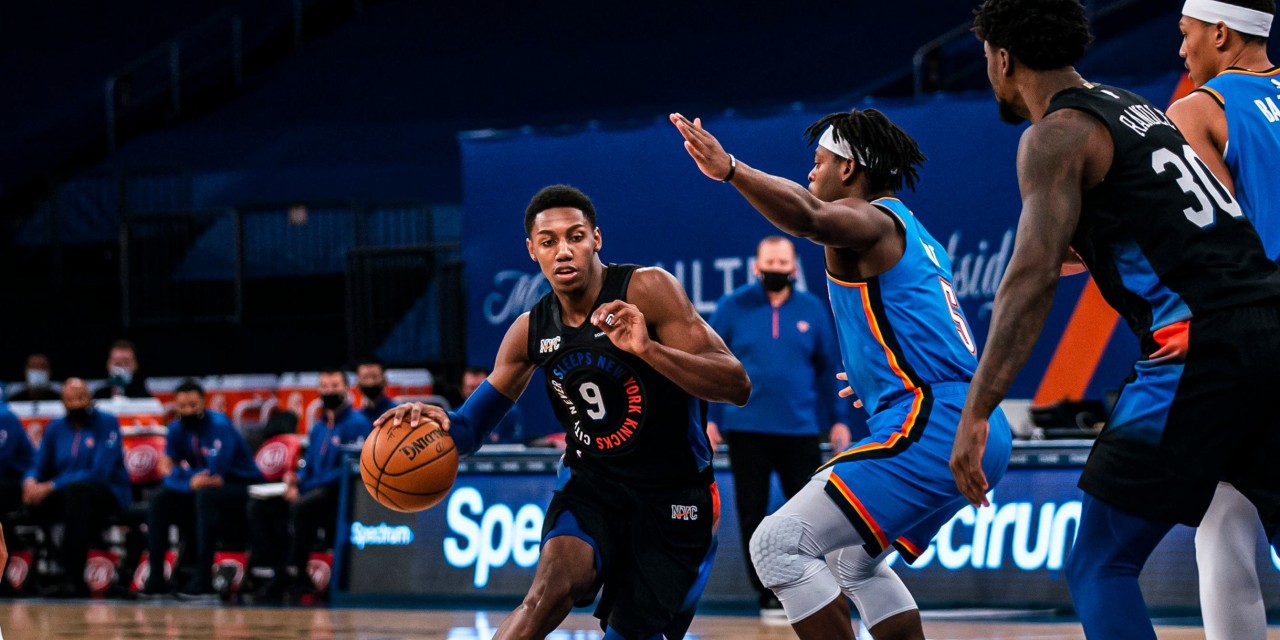 The Knicks look to rebound for an inauspicious second-half start against the Bucks with a Thunder matchup on the road.

The New York Knicks (19-19) seek to bounce back against the Oklahoma City Thunder (16-21), who are fresh off a victory against Luka Doncic and the Dallas Mavericks. Conversely, New York suffered a bludgeoning at the hands of the Milwaukee Bucks in the team’s first outing post-All-Star break.

The Knicks fell by a score of 134-101 in a game decided well before the final buzzer sounded. Giannis Antetokoumpo accumulated a 24-point triple-double in the Bucks win while Julius Randle put together debatably his worst performance of the season, tallying just seven points on 3-for-12 shooting.

After facing off versus a title contender in Milwaukee, the Knicks are in for a less arduous challenge considering the Thunder are rebuilding. Additionally, Oklahoma City will be without their top scorer and best player in Shai Gilgeous-Alexander, who’s sitting with a quad bruise. New York must continue to win games such as these (against inferior competition) to crack the postseason. Here are some pertinent storylines for the orange and blue, who have their sights set on eclipsing the .500 mark once again.

Randle will compensate for his uncharacteristically abhorrent performance on Thursday. With season lows in both points (seven) and minutes (29), there is nowhere for the big man to trend but up. While not quite the historically effective defensive unit they were in 2019–20, the Bucks remain among the league’s most disruptive—they rank seventh in the NBA in opponent field-goal percentage (43.9%). Not to mention the Thunder boast significantly less intimidating defenders. Antetokounmpo and Brook Lopez, two Bucks, are both all-world caliber anchors.

Julius with the sweet baseline fadeaway. Hopefully this can get him going pic.twitter.com/7k0tC2yV9D

Oklahoma City, on the other hand, lacks much fervor in the frontcourt. Darius Bazley, while a capable second-year player, doesn’t strike fear in the hearts of his opponents as a defender. Al Horford is likely the Thunder’s best interior protector and one-on-one stopper at the big spot—but he’s a bit long in the tooth at 34 years old. His days of locking up the likes of Joel Embiid, Antetokoumpo, and Randle are behind him.

Expect New York to make a point of emphasis to involve their star early and often. Head coach Tom Thibodeau is well aware of Randle’s supreme importance to the success of this Knicks team, specifically on the offensive side, where the team has struggled at times. Big scoring nights from Randle have been conducive to success all season long. He’ll crack the 20-point threshold and remind us all why he’s an All-Star.

The auspicious play of Obi Toppin stood out as one of few bright spots in Thursday’s ignominious defeat (shout out to “Clyde” Frazier for introducing me to that awesome word). In 19 minutes off the bench, Toppin dropped 10 points and converted on four of his five shot attempts, including one three-pointer. Pulling down five rebounds for good measure, Toppin actively contributed in multiple facets of the game. He made the most of his chance and a solid case for rotation minutes against the Thunder.

The Knicks are dealing with a dastardly case of the injury bug. Derrick Rose, Austin Rivers, and Mitchell Robinson are all sidelined, while Elfrid Payton is questionable for Saturday’s matchup. Yes, Toppin doesn’t play the guard/center positions. Although, with four rotation pieces down for the count, it’s reasonable to presume there is room for non-rotation fixtures to see some added run time. New York’s lengthy injury list likely played into the decision to deploy Toppin for 19 minutes on Thursday.

Knicks faithful should feel good about Toppin’s chances for consecutive standout performances. Mike Muscala is the primary backup big for the Thunder, and thus it’s possible he’d check Toppin—talk about a mismatch. An immobile defender who cannot stay in front of his man off the bounce, Muscala would be hard-pressed to keep the expeditious Toppin away from the rim. Muscala’s not one to contest out behind the arc either, despite being a stretch big himself.

Toppin should, by all indications, see approximately the same time he did Thursday, if not more. The Thunder are without the linchpin to their offense, and as such, this game could very well end up as a wire-to-wire win for New York. If this is the case, anticipate extended playing time for Toppin and ample opportunity to prove why he belongs as a rotational fixture.

Derrick Rose is out for the Knicks Saturday against the Thunder due to the NBA's health and safety protocols, from the Knicks injury report.

Elfrid Payton is questionable with a strained right hamstring.

Austin Rivers and Mitchell Robinson are out.

UPDATE: Immanuel Quickley has a sore groin, according to Thibodeau, but is playing while Payton is out, per The Athletic’s Mike Vorkunov. Rose remains out, too.

Immanuel Quickley is good to play for the Knicks today in OKC after pregame warmups. Elfrid Payton is out. So is Derrick Rose.