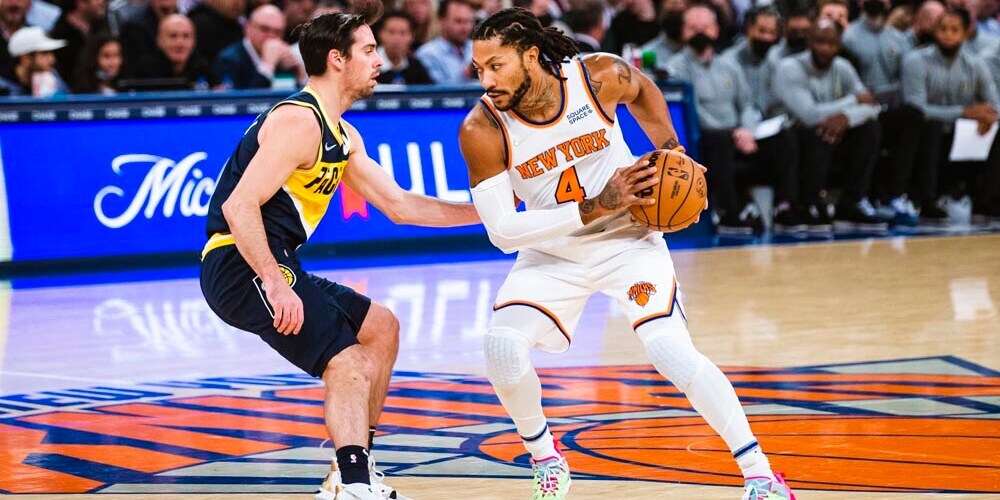 Immanuel Quickley and Derrick Rose were the sources of an energetic Knicks second-half comeback to down the Pacers at The Garden.

Shoutout Derrick Rose and Immanuel Quickley. The backup backcourt propelled the New York Knicks (8-6) to victory over the Indiana Pacers (6-9), 92-84.

Tonight gave flashbacks to ‘90s Pacers-Knicks games, and not in a flattering way.

The first quarter was objectively awful. Neither side had much success connecting on a three-pointer, the Pacers hitting 1-for-9 and the Knicks 0-for-9. Had Kemba Walker not come out guns blazing, the Knicks could have easily scored fewer than 10 points.

Stop me if you heard this before, but once the bench unit came in (mainly Derrick Rose and Immanuel Quickley) the Knicks’ luck started to change. Quickley broke the seal with a three-point bomb and followed up with another trey from 30-plus feet, and the Knicks grabbed the lead. The high was short-lived as the starters surrendered the lead near the end of the half to head into the locker down 49-48.

Now, stop me if you also heard this before: coming out of the locker room, the Knick starters resumed their sluggish woes. The Pacers took control, seemingly by accident, because of the ineptitude of the Knicks. A 13-0 run by the Pacers helped them build a lead that the bench cut into to end the third, but the Knicks still trailed 74-69 heading into the fourth.

The bench mob continued there-now patented late-game run. Quickley’s hot shooting in particular sparked life into the Knicks. And down the stretch, Quickley seemed to be everywhere like he mastered instant transmission. His energy helped the Knicks grab the lead they would not surrender. To make it extra special, Barrett iced the game with a three-pointer as he woke up from his shooting slumber in the second half.

The Knick of Time

This man needs more minutes. No, I’m not talking about Obi Toppin this time. I am talking about Immanuel Quickley. Once again, Quickley was electric off the bench and the main reason the Knicks walked away with a win.

Quickley finished with 16 points, shot a perfect 4-for-4 from deep, and pulled down five rebounds (two offensive) as he was quite literally everywhere towards the end of the game. It is safe to say any sophomore struggle worries can be set aside. Now the conversation shifts to expanding his role.

Early Bird Not Quite Getting the Worm

It has now been two straight games where Kemba Walker has started the game strong, yet the starters have not gotten off to noticeably different starts. The conclusion is rapidly becoming that Kemba is not the problem, certainly not the biggest problem. The true issue is no one has taken a back seat to facilitate.

The starting lineup isn’t selfish per se, but the offensive rhythm mirrors that of a team with three superstar scorers, which is just not what the starting lineup is. An adjustment should be made, only I’m not sure that Kemba has to be the odd man out.

Derrick Rose, Immanuel Quickley, and Obi Toppin are emerging as the fanbase’s favorite trio, and for good reason. This game had as much of a pulse as the Night King until all three checked in. Rose got things going at the end of the first quarter, with Quickley and Toppin checking in shortly after.

Quickley connected on some long-range bombs, Obi caught some lobs and a body, and suddenly the Knicks had life—and the lead. The bench unit as a whole remains the strength of the squad, with Rose, Quickley, and Toppin in the thick of it all.

We have waited a full season and 13 games for a true Obi poster. It arrived and it was beautiful.

The Knicks are back at The Garden Wednesday for a matchup with the Orlando Magic.