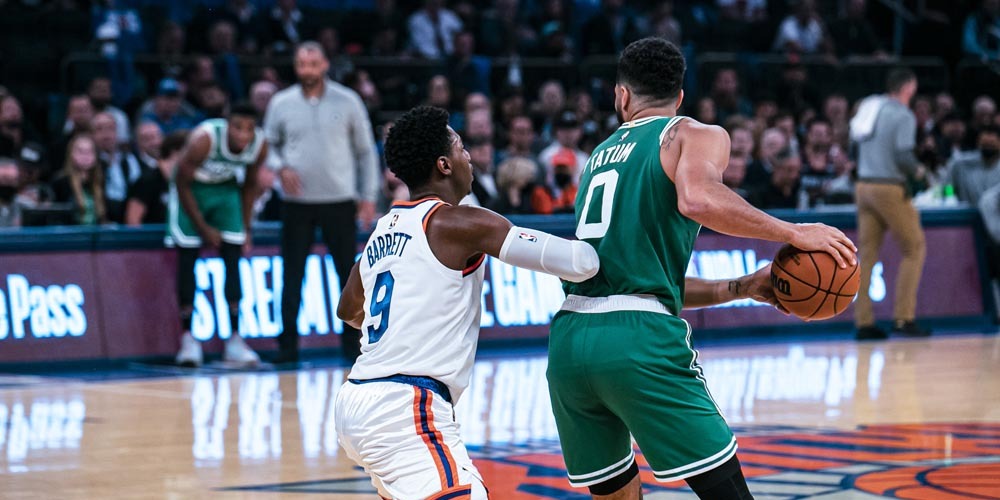 The Knicks outlasted Jaylen Brown and the Celtics with a double-overtime win in the first game of the season, exhausting everybody involved.

The New York Knicks (1-0) won the battle of stamina against the Boston Celtics (0-1) on Wednesday night, with a final score of 138-134 in a game that felt like it would never end.

It was a double-overtime thriller at Madison Square Garden as two of the four original NBA teams met for the first time this season. The Knicks, rocking their new crispy Classic Edition jerseys, came into the game riding off of an undefeated preseason, hoping to continue their winning streak. As for the Boston Celtics, they started guard Jaylen Brown after he was questionable due to having contracted COVID-19.

It went down to the wire multiple times, with six lead changes and an infinite amount of head-scratching moments like a botched Brown dunk that would have almost completely sealed the game for Boston, or a lapse in defensive acumen on the part of new Knicks guard Evan Fournier, where he double-teamed a fallen Jayson Tatum leading to an overtime-forcing three-pointer from Celtics guard Marcus Smart.

Regardless, it was showtime in Midtown and neither team disappointed. Ultimately, the ‘Bockers won the barn burner with their defensive intensity and some clutch threes from Fournier and RJ Barrett.

The homecoming game for Kemba Walker might not have gone how he wanted it to go, as he finished with four turnovers and only three assists on 38% shooting, but there was another Knick making his debut made his mark on the minds of Knicks fans—newly acquired guard Fournier.

MASSIVE SHOT FROM FOURNIER AS HE GETS HIS FIRST BREEN BANG pic.twitter.com/nZ4RwKFT4F

The French King started out slow but ended the night with some of the most pivotal three-balls all night coming in overtime and double overtime. He debuted as a Knickerbocker with 32 points, six rebounds, and a few highlight moments that swung momentum New York’s way multiple times down the stretch.

Julius Randle, looking to prove just how “regressed” he actually became during the offseason, nearly finished the night with a signature triple-double. He tallied 35 points, eight rebounds, and nine assists as he emphatically reminded both the Garden crowd and the NBA world that he is not to be disrespected coming off his best year yet as a professional. He showed great poise even as exhaustion set him for him and both team’s squads, and avoided his signature end-of-game mishaps by trusting in teammates like Fournier, Derrick Rose, and Barrett.

Fourth-year center Mitchell Robinson returned to the starting lineup for New York for the first time since March of this year, and he did not disappoint. We can only dream of how dominant he will be when his conditioning finally gets up there, but for now, finishing with a line of 17 rebounds, two blocks and 11 points will leave us hungry for more. He looked strong and Boston was scared to challenge him in the paint, with Knicks coach Tom Thibodeau looking to him often for defensive bursts whenever the team looked flat.

RJ Barrett started the game off, although he did an impeccable job guarding Jayson Tatum, who finished with 23% shooting. Barrett is a late-game bloomer, though, and he came alive in the third quarter with his new and improved three-point shooting and some explosive finishes at the rack. Barrett finished with three huge long-balls made and 19 points total on a night where it looked like he would never find the bottom of the net again. His performance woke the Knicks up in the second half and beyond.

The New York bench was a big key to this game’s result and starters not being completely obliterated by the three-hour mark of the contest, and forward Obi Toppin certainly stole the show from the entire second unit on Wednesday night. Toppin finished with a career-high 14 points and played efficiently alongside Randle during some of the team’s small-ball rotation experiments. He also had five rebounds to go alongside his dunking clinic and made his presence known to Payton Pritchard in the second half of the game with a poster.

Brown stole the show early on and went on a scoring tear—at one point on pace to score 80 during the battle. He ended with an eye-popping 46 points on 53.3% shooting. He was unstoppable, and New York struggled to keep him contained. The Celtics’ dynamic duo of Brown and Tatum was fairly one-sided, which contributed to some struggles offensively when Boston was trying to clinch the game during the second overtime period.

Next up is a home-and-home for the Knicks against a young Orlando Magic (0-1) squad back on Friday and Sunday. The Knicks get one total day to rest up.