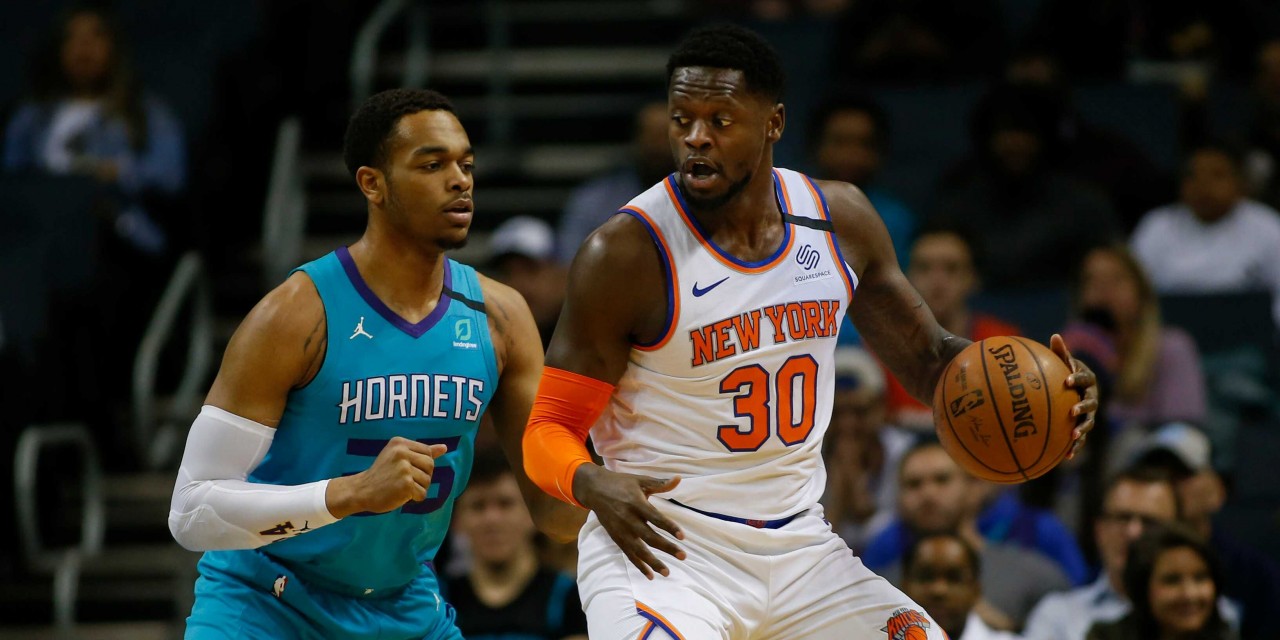 The Knicks were beaten by another bad team in the Hornets when they visited Charlotte on Tuesday in spite of a built-up early lead.

With much of the NBA family and the public at large still reeling after the tragic death of Kobe Bryant and his daughter Gianna on Sunday, it was an emotional night for many at the Spectrum Center. Incredible job by the Hornets organization for their touching pre-game tribute to Bryant, who was originally selected by the Hornets back in 1996 before a draft day deal sent him to the Lakers. Charlotte players also donned shooting sleeves with Kobe’s jersey numbers 8 and 24 and took a 24-second shot clock violation to begin the game, a gesture we saw from many teams around the Association over the past couple of days.

As far as the actual game goes, it was a relatively low-scoring affair down in Buzz City, as the Knicks (13-35) fell 97-92 to the Hornets (16-31). Charlotte snaps their eight-game losing streak and were led by point guard Terry Rozier, who had 30 points, hit four three-pointers and grabbed 10 rebounds. Old friend Willy Hernangómez contributed to the win with a double-double of his own with 12 points and 10 boards.

Charlotte wasn’t particularly good from the field but did their damage at the free throw stripe, knocking down 21 foul shots and of course were able to take advantage of the Knicks’ ineptitude and inability to pull together 48 minutes of decent basketball. New York held a 13-point lead part way into the second quarter before allowing the Hornets to come storming back on home turf. Another painful loss in the books for the Knicks.

Julius Randle and Marcus Morris both showed up in a big way offensively this evening. Give them a ton of credit: Randle was clearly playing with a heavy heart, as he had a personal relationship with Bryant and briefly played with him in Los Angeles. Randle scored 24 points (an appropriate sum) and looked inspired and focused. Mook poured in 23 points and continued to build on his amazing season and prove he’s too good for this lowly franchise.

Send Mook to a contender he doesn’t deserve the Knicks stink pic.twitter.com/5qEK8yKMNY

Unfortunately no other Knick really showed up to help. Elfrid Payton was the only other Knick in double figures, scoring 10 points to go along with eight rebounds and six assists, a very Payton-esque stat line if you ask me. Overall, it was one of the more lackluster offensive efforts of the season for New York, who couldn’t find any continuity or flow after the first quarter. Clearly, New York is missing the energy and productivity of R.J. Barrett, who at least brings some offensive creativity and excitement when the rookie’s on the floor, even if he isn’t always super consistent.

Another Knicks game means another time we all collectively scratch our heads at the minutes distribution amongst the veterans on short-term deals and the young guys. Once again, we see guys like Payton get 33 minutes at the point guard position, while Frank Ntilikina sees a measly three minutes and didn’t see the floor until the fourth quarter. Payton is probably a better player than Ntilikina at this juncture, but he likely doesn’t have a future here and the French guard is only 21 years old and could be a key piece going forward.

Also, Kevin Knox playing 11 minutes is strange as well. I know Knox has been bad this year and has done nothing well and shown no improvement, he needs to be able to see more time in order to gain more confidence and maybe pick up some positive momentum in the final few months of the season.

Allonzo Trier picked up another DNP tonight as he continues to be absolutely buried on the bench under Mike Miller. Not sure the reasoning, but its disappointing to see the 24-year-old, who had such a promising rooking campaign, get such little opportunity this season.

Regardless of who plays, the Knicks are going lose a lot more often than they win simply because they just don’t have the talent of other teams. Since this is the case, the focus should be developing talent and seeing what you have, not giving minutes to Payton and Taj Gibson over younger guys who will likely be here longer and have a bigger upside. It is mind boggling to see all of this unfold on a nightly basis.

The Knicks are back in action tomorrow night against Ja Morant and the red hot Memphis Grizzlies.

»READ: For the Knicks, re-retiring “24” is only right for Kobe Bryant

»READ: Mike Mills vs. David Fizdale: what have the differences been?