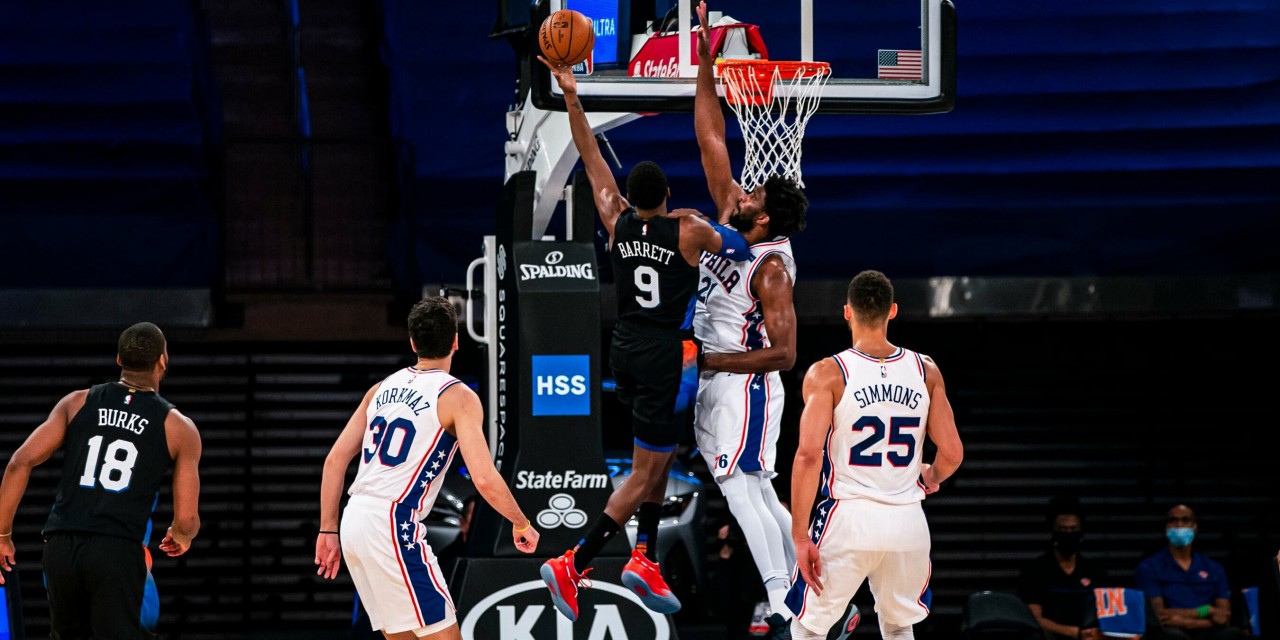 Strong starts for Alec Burks and Julius Randle weren’t enough to beat the Philadelphia 76ers in the Knicks’ home opener. The Sixers pulled away in the third and New York never got close again.

The New York Knicks’ (0-2) home opener started off exciting and promising, coming off an interesting season opener against the Indiana Pacers, the team quickly realized the difference in competition with All-Defensive players Joel Embiid and Ben Simmons keeping the Knicks’ best players quiet.

It started off promising with Julius Randle hitting what might be his high watermark: two three-pointers, a nifty hesi, step-back mid-ranger over Tobias Harris, and some neat passes off drives. Alec Burks checked in in the first quarter and picked up right where he left off in Indiana, remaining scorching hot in a New York jersey.

Randle and Burks ended the night with 47 of the team’s total 89 points, each tallying 25 and 22, respectively.

Unfortunately, for all the attention Randle drew while posting up Harris, the faster Harris ran circles around him on the other end.

The Philadelphia 76ers (2-0) were trying to get the ball to Embiid early on in the game, hoping to get Mitchell Robinson in foul trouble and, to his credit, he was much more competent than in most of his games as he stayed on the ground against some Embiid pump fakes and didn’t give him anything too easy.

R.J. Barrett started off flawless in Indiana before ending the night with 26 points, five assists, and eight rebounds on 11-for-15 from the floor. Conversely, at Madison Square Garden after saying how the team has to defend their home ground despite the lack of fans, Barrett finished with 10 points, four assists, and four turnovers on 2-of-15 from the floor.

It’s definitely not what you want to see from the former third-overall pick, but the silver lining is that he stayed aggressive. He got to the line eight times and didn’t shy away from the basket in the fourth quarter when it was all but over.

RJ finally breaks free from Simmons for the layup pic.twitter.com/yiQMz7wH0s

It’s also a testament to All-Defensive players in Embiid and Simmons. Simmons was exceptional as an on-ball defender in this game and the lack of perimeter shooting from the Knicks enabled him to roam and pick a few pockets of opposing players on several possessions.

If great defenders are the issue for Barrett, he’s probably in for a similar shooting night next game against the Milwaukee Bucks.

Entering the second half, the Knicks were only down five points but went on to get outscored 26-14 in the third period. The Sixers showed their class as Embiid and Simmons were able to open holes in the defense, swing the ball several times and find an open shooter, usually Danny Green or Seth Curry.

There were some particularly back-breaking triples from Curry late in the shot clock even over solid defense.

The third-quarter run was compounded by the news that Obi Toppin’s calf injury that ruled him out of today’s game would be re-evaluated in seven to 10 days. This comes on top of the Immanuel Quickley injury he sustained on opening night after an exciting preseason showing. It is unclear if he’ll be fit to play against the Bucks.

And while on the topic of point guards, Elfrid Payton got the starting nod again despite appearing allergic to making jump shots and Frank Ntilikina only earned two garbage-time minutes despite the deficiency at the position.

A bright spot for the game was Mitchell Robinson. To his credit, he only tallied three fouls and still was a bit too eager to hunt for blocks, highlighted by a massive leap at a Furkan Korkmaz layup, which he was never going to take.

But it’s promising to see Robinson stay on the court against an elite center. On offense, he stole a few offensive rebounds and had an efficient night. If he can stay on the ground and out of foul trouble, he’ll have all season to grow on both ends and hopefully into a true building block for this Knicks team.

On to the next one.