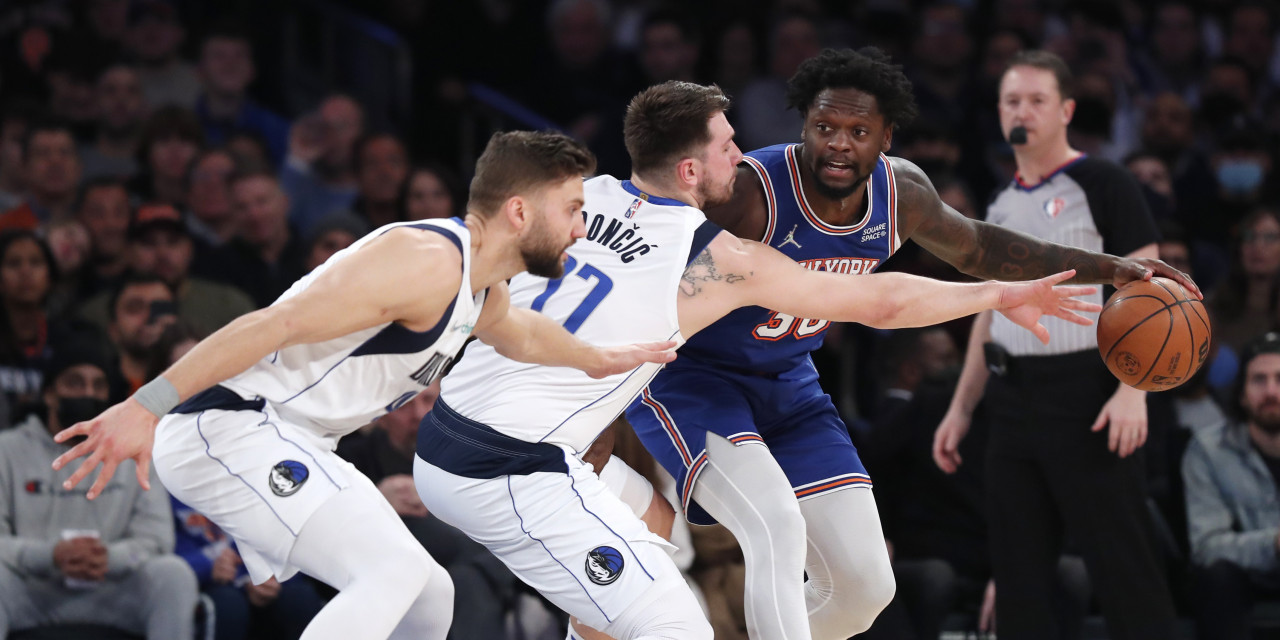 A dishy Julius Randle, back-to-back 30-point games for RJ Barrett, and a season-high night for Mitchell Robinson had the Knicks blowing out superstar Luka Doncic and the Mavs.

The New York Knicks (21-21) defeated the Dallas Mavericks (22-19) by a final score of 108-85, ending the Mavs’ six-game winning streak and handing the ‘Bockers their fifth straight home victory.

Even with Kristaps Porzingis and Jason Kidd out due to health and safety protocols, this matchup consisted of several Knicks with Dallas rostering Trey Burke, Tim Hardaway Jr., Reggie Bullock, Theo Pinson, and Frank Ntilikina. Much like their Knick era, those players found themselves on the losing end of a midweek matchup at Madison Square Garden.

This was one of the more complete performances from New York tonight, with everyone getting active on both sides of the ball. Dallas had a good start—Brunson (more on him in the notes) looked good, slicing and dicing New York’s bigs on single coverage, even to the point where Walt “Clyde” Frazier was calling out some of his moves on the telecast. Doncic, forever dangerous, was getting some questionable shots, but they were open looks.

But outside of that, Dallas was launching (and missing!) threes. Missing Porzingis, the Mavericks just lacked another offensive outlet to throw the ball to. If it wasn’t created by Doncic or Brunson, we saw Dallas’ offense devolve into threes from Maxi Kleber (wide open, wasn’t a fan of that), Hardaway Jr., and Bullock. The lack of self-creation was evident and was key in halting Dallas’ offense early, especially when it became clear that it was an off night from Doncic. The Mavs finished shooting 41.0% from the field and 8-of-37 (21.6%) from deep.

Without much of a point guard, the Knicks took off, thanks to Randle’s creation. It was one of his more impressive games—finding both open shooters on the wing and his fellow bigs at the rim. His eight assists were solid, but they didn’t do much to explain how good he was running the show. Alec Burks helped in this role with six assists as well, but it was Randle’s passing that stood out. As a team, the Knicks finished with 24 assists on 42 made shots.

The Knicks’ defense was excellent tonight. Not only were they keeping the Mavs at bay while shooting in the second half, but they kept both Doncic and Brunson away from the rim. By eliminating any shots at the rim, Mitchell Robinson’s job became easier and a returning Nerlens Noel was able to offer another defensive threat on the perimeter. New York turned that defensive success into transition buckets, pushed the lead to 17 in the third quarter, and never looked back.

Overall, the energy was excellent in this game and the vibes feel back. Randle and Barrett leading the offense, Burks and Fournier playing proper ancillary roles, and the combination of Robinson and Noel at the center spot were all crucial in New York’s success tonight. Moving back to .500, the Knicks feel like they could have a small run here if everything continues to click. I want more and I want to continue to see them put games together like this, and if so, we could be talking about New York as a potential buyer at the trade deadline and a top-six seed in the Eastern Conference in play.

Let’s go to the game notes.

The Knicks travel to State Farm Arena in Atlanta, Georgia, to face the Atlanta Hawks (17-23) on Saturday, January 15th. This will be the first game between the two teams since their Christmas Day matchup, where the Knicks won 101-87 without Trae Young.