The Knicks Still Go as Far as Julius Randle Takes Them 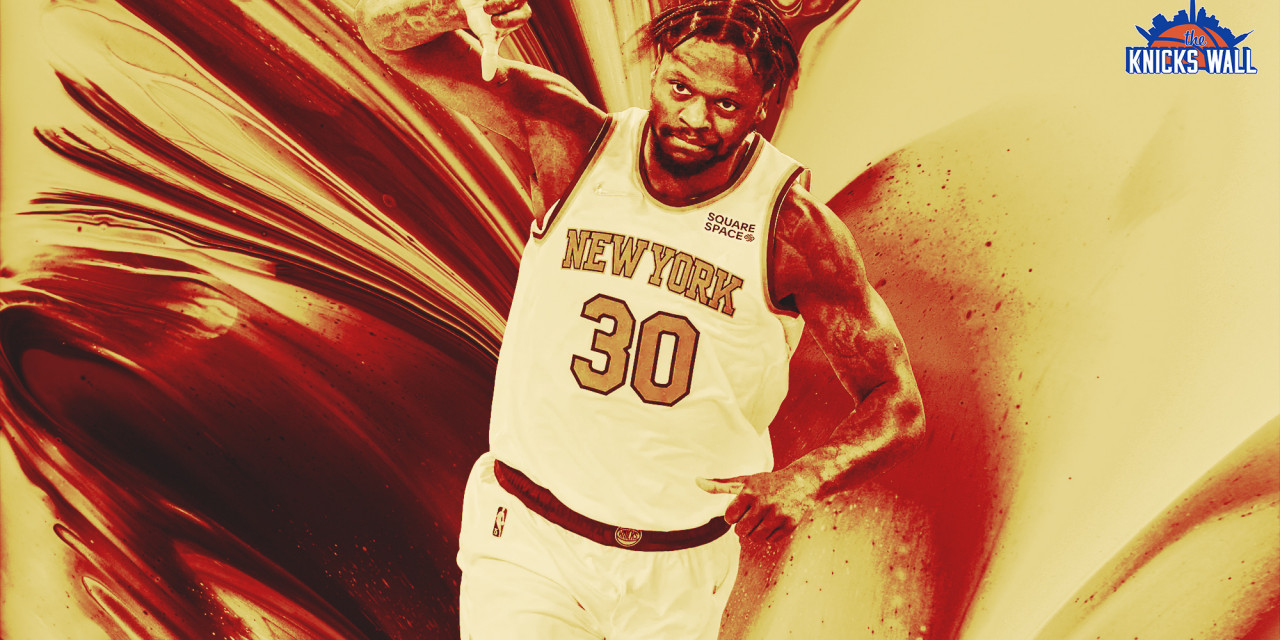 The Knicks are, quite frankly, Julius Randle’s team, for wear or worse. His energy and willpower should carry the squad no matter what.

Julius Randle has said in the past to call him out if his play is not at the level it needs to be. Well, this season, New York Knicks fans have had no trouble doing just that, and rightfully so.

Randle cooled his seat in his return from the health and safety list Tuesday night against the Indiana Pacers. Not only did he put together an impressive stat-line—30 points, 16 rebounds, four assists, and one steal—his energy seemed back.

Prior to being placed in health and safety protocols, that energy was severely lacking. The sluggish attitude ended up being the boiling point with the fans. Missing jumpers is one thing, but not giving effort is an unforgivable sin. That grabbed headlines today when Randle, in true New York athlete fashion à la Javier Báez, thumbs-downed the Garden faithful on Thursday. Randle told the press postgame that what he really meant was “Shut the f–k up.” … Tensions are high.

The crescendo of this frustration came from an unlikely source, MSG Network’s Wally Szczerbiak, who was not happy with the way Randle set screens for his teammates. Breaking down Randle’s lack of enthusiasm for setting a screen is more armchair psychology; the dip in production, however, is black and white.

And no matter how much one might hate to admit it, the Knicks go as Julius Randle takes them.

The two games Randle missed in health and safety protocols were two of the most pathetic showings of the season. The team scored 80 points against the Oklahoma City Thunder and then got blown back across the border by the Raptors in Toronto.

The void left by Randle was not filled by Obi Toppin for a few reasons. The first is that Toppin and Randle do different things. The second, the much larger problem, is Randle still carries an inordinate amount of responsibility after the front office had a full offseason to build around him.

Following the lackluster loss to Toronto, Tom Thibodeau chose to take his frustration on Knick fans, as well as stick up for his top guy.

“You try not to pay attention to it, because it’s really meaningless, whether it’s praise or criticism. It doesn’t really matter,” Thibodeau said in response to the criticism that has come Randle’s way, particularly on social media. “Really, what matters is what we think. And so, we know how important it is. But it’s like the backup quarterback. Everyone thinks the backup should start until he has to start. And so, Julius is a terrific player.”

There are flaws on this team that go deeper than any one player. The difference for Randle is his performance affects the team more than anyone else, and for most of the season Randle has not looked like the same player he was last year, both statistically and when you watch the games.

The defensive intensity and consistency from last year’s team have fallen off, but that is more of a team issue than a Randle issue. Unfortunately for Randle being the unofficial captain/the best player, he is also the meat shield when things are not going well.

This is not to suggest Randle has had a limitless motor 24/7. But he also has not been a dud on defense. Measuring individual defense requires more reliance on film than stats; however, Randle’s activity can be found in the fact that he has 22 blocks this season—four more than he had all of last season. The true problem could be that he spends his time on the floor with Evan Fournier, who is more rim chauffeur than perimeter defender, and Kemba Walker who is a human turnstile, too.

Thibodeau has turned to Randle often to be the main initiator on offense. This is the decision that played a role in Walker’s struggle at the start of the season and hasn’t yielded the desired results. Randle’s assist percentage has taken an ever-so-slight dip from 27.2 last season to 23.7.

Part of the decline in playmaking is way too many Randle isolations. Another part is Randle’s teammates building brick houses a lot of nights.

Not featured in your box score: pic.twitter.com/ezwU7bY3t7

Offense is where Randle must take his medicine. This is the area with tangible evidence that Randle’s play is not at the level it was last season.

A rational viewer who had sobered up from an intoxicating 2020–21 season knew that Randle would come back down to earth to some extent. The number of tough shots he hit during that run was not sustainable. What that rational viewer, and anyone who hopped on the Julius Randle rocket ship last year, did not forecast was this much of a dip with better scoring help.

This puzzling regression is not restricted to Randle, RJ Barrett has had a similar shooting percentage crash, but the fact remains that Randle has somehow become a worse scorer playing with Walker and Fournier instead of Elfrid Payton and Reggie Bullock.

If you want to try and wrap your head around that, the answer may be more straightforward than expected: Randle is missing a lot of the shots he nailed last year.

So far this season, Randle is shooting 42.2% from the field—47.0% from two-point territory and 32.3% from three-point territory. His free throw percentage has also taken a hit, down to 76.4%.

These numbers are a far cry from the prolific season he put together to spearhead one of the greatest single-season turnarounds in league history. In a vacuum, his season averages of 19.6 points, 10.1 rebounds, and 4.9 assists per game are not bad at all. With the context of Randle needing to be that top guy, these numbers do come across as rather flat, and a deeper look at his scoring only puts his current production in low light.

Randle had one game last season where he failed to reach double digits in scoring. He already has four such instances this year, all of which he played 25-plus minutes. Those are the type of performances that have fueled cries for more playing time for the fan-favorite Toppin, and victory laps from doubters who feel vindicated that Randle’s 2020–21 campaign was an outlier.

The alarming part of Randle’s regression is that he is utilizing the same spots on the floor, he’s just bricking shots. Randle made quantum leaps in his overall shooting numbers last season, particularly in the midrange.

Julius Randle is the Most Improved Shooter in the NBA.
Just look at this pic.twitter.com/K7uazgdeVV

His efficiency from the midrange has fallen off a cliff, which has amplified the less drastic dip in three-point percentage and could be the single best reason to explain what is so different about this season’s Julius Randle.

The midrange was a true comfort zone for Randle. He shot 41.6% last season (10 to <16 ft.), a stark contrast from his 35.8%. Combine this with a cooler percentage from beyond the arc, and a fair amount of double teams due to a continued lack of supporting cast helps you arrive at an underwhelming season.

There is still hope for Randle, as his return from a two-game absence on Tuesday proved. But the problem the front office must face is their team’s success still hinges on the broad shoulders of their All-Star forward.

It would be optimistic to think that Randle’s supporting cast wakes up and starts taking some load off of him, particularly RJ Barrett who also plays a major role in the team’s return to reality. The cold hard truth is that if the season does turn around, it will be because Randle has once again embarked on a historic season, which is not sustainable.

Julius Randle is no doubt the straw that stirs the drink, and right now that drink is not any good. But when fans get frustrated, they should know that Randle is doing a lot more than carrying the team on the court. He is defending his coach and front office from a summer that is beginning to look like an undeniable flop.