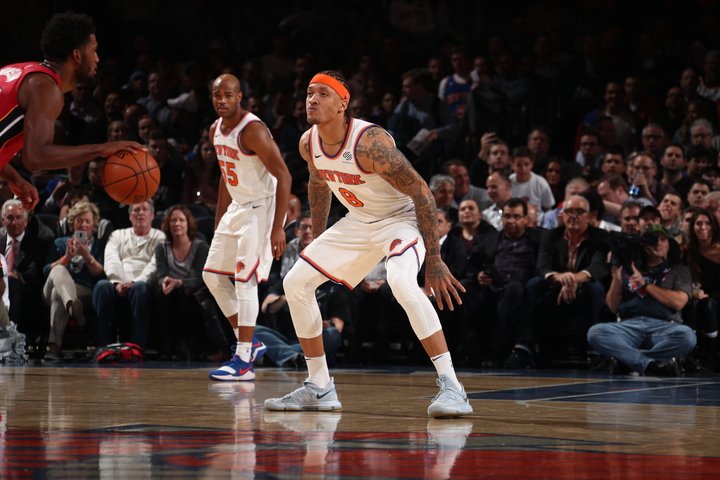 The Knicks are on the road again, this time heading to South Beach to face Goran Dragic and the Miami Heat.

Having lost six of their last seven games, the Knicks (18-20) are looking to get back on track with a win against the Heat (20-17) in South Florida tonight.

This will be the second time these teams have matched up this season, with the first meeting resulting in a 115-86 Knicks win in front of the Garden crowd.

Having fallen out of playoff position since losing Tim Hardaway Jr., New York is looking for a win to boost morale in what has to be a dejected locker room. The Knicks have struggled to pick up wins as of late, going 6-11 in the last 30 days, with four of those wins coming against non-playoff teams. With games against the Mavs and Bulls coming up, a win tonight for New York could be the start of a nice stretch that brings them back into the playoff picture.

Ron Baker (dunked on so hard his face broke) will once again play with a protective mask. As for Miami, they’ll be missing Dion Waiters (ankle), Justise Winslow (knee), Rodney McGruder (leg), and Okaro White (foot), giving them a significant disadvantage on the wing.

Following a mediocre game in which he put up 16 and six against Washington, Kristaps Porzingis had this to say about his recent struggles on the court:

“I’m tired; I’m tired; I’m so tired right now. I have one day to rest my legs and get back and play better and have more energy and try to bring the team’s energy up. We’re in a tough stretch. The mental part doesn’t help at all. When it’s mentally tough, you don’t have it in you.”

As expected, this statement caused Knicks fans and media alike to question KP’s toughness. While there’s nothing wrong with being tired after constantly being injured all season and playing in the EuroCup over the summer, it was probably a poor decision for Kristaps to put it out there. As he should know by now, New York media tends to blow things out of proportion.

Hopefully a day’s rest and a meal at Salt Bae’s restaurant in Miami is enough to get KP back into the swing of things.

Had an amazing time at @nusr_et with my family! #Miami #NewYork #SaltBae

New York’s primary problem since losing Tim Hardaway Jr. to a leg injury has been scoring. Without him, there’s no clear cut second option, and therefore a lot of the responsibility to carry the scoring load has fallen on Porzingis. KP’s struggles of late have highlighted that he’s not quite ready to assume that enormous burden all by himself.

Luckily, Timmy is set to return sometime this month, so the Knicks don’t have to wait much longer for their bucket-getter to come back. In this video posted by Ian Begley, we see some encouraging progress for the shooting guard as he looks to be moving around well during a shootaround.

A brief look at Tim Hardaway Jr. working out before last night’s game. He seems to be progressing toward a return sometime this month. The Knicks have felt his absence lately. pic.twitter.com/NvWdD7rLHu

The Knicks are only a game out of a playoff spot, and as such, these next few games will be crucial in deciding the fate of their season. Eight of New York’s next ten games are on the road, with matchups against four playoff teams, including the Golden State Warriors. Whether or not they can pick up at least half their wins during this stretch might determine if this team is still contending for a playoff spot come February.

Tip-off for tonight’s game is set for 8:00 p.m. EST from American Airlines Arena in Miami.