The Knicks Are Stuck Between Talent and Effort 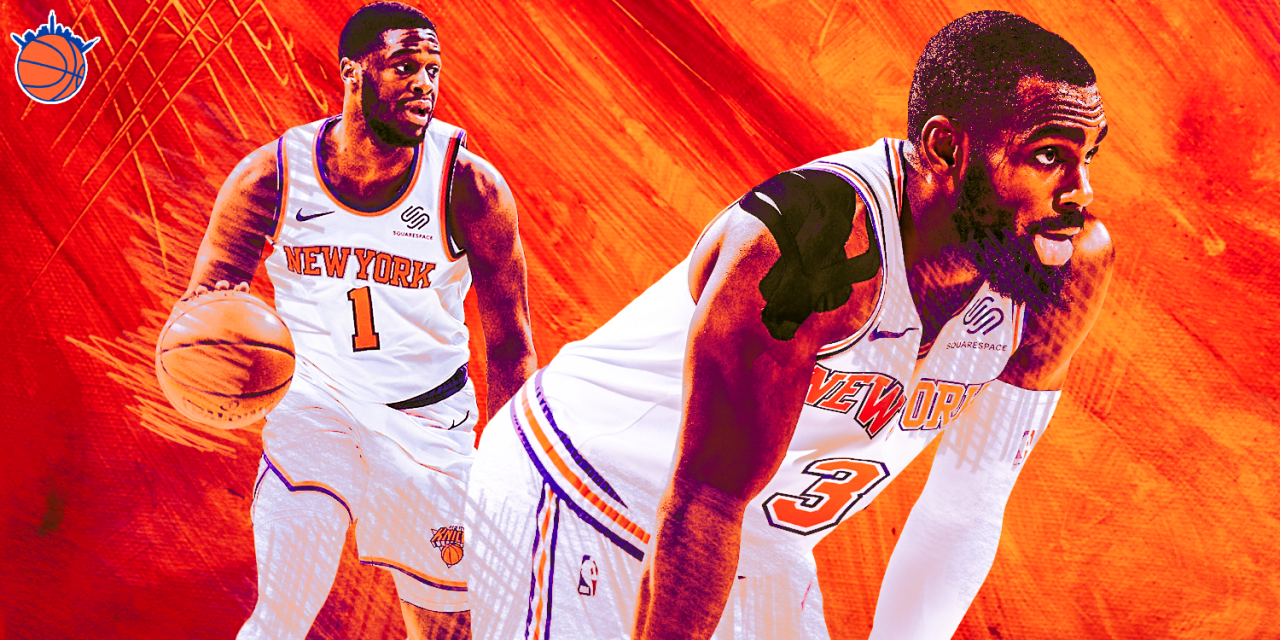 One of the bottom teams in the league, the Knicks are trying to close a seismic gap between talent and effort, which dictates the congealing flashes and close losses for New York.

The Knicks are tanking. After a loss at home to the Philadelphia 76ers on Sunday, they have lost 17 of their last 20 games. For many Knicks fans, the already-doomed season, now that the team has just about reached the halfway mark, has been one of mixed feelings—like if someone offered you a brand new Porsche, but all you could eat for a year was stale Cheerios sans milk. Breakfast, lunch, and dinner. Every day.

That’s what watching the Knicks this season has been like. We suffer through our daily dose of dry cereal, never letting our eyes off the shimmering prize waiting at the end of the tunnel. Of course you take that deal; Cheerios for a Porsche? It’s a no-brainer.

But still. It has been torture watching this team get blown out of the water every fourth quarter, after having shown pretty regularly that it can hang with almost anyone through the first three frames.

The Knicks rank sixth from last in Offensive Rating. On the defensive end, the only team they’ve been more effective than is the Cleveland Cavaliers, currently 9-35, good for the worst record in the league.

If this team was not tanking, this would be an unmitigated disaster—even with franchise player Kristaps Porzingis having not suited up for a single game. Why? Because these Knicks are not talentless.

After a slow and injury-plagued start, rookie Kevin Knox has heated up over the past month or so, and is now shooting an acceptable 35.9 percent from three. Emmanuel Mudiay looks like a potentially useful NBA player again. Tim Hardaway Jr. has done an admirable job carrying the scoring load and not self-detonating every play on the other end. Noah Vonleh and Allonzo Trier have put the league on notice that they, despite being on absolutely no one’s radar before the season, are here to stay. Even Luke Kornet has had his moments. In fact, Luke Kornet’s sister has had her moments.

Don’t get it twisted. This is not a “talented team.” But they are not talentless. If you watch the games, it’s obvious the players aren’t blatantly throwing away contests. They play hard, and David Fizdale’s rotations don’t suggest any outright push to lose, à la what the Atlanta Hawks do every time Jeremy Lin gets hot.

The Knicks should be losing. A lot. It fits the vision the front office has for this team. The manner with which they’re losing is a little concerning, though.

Should we care about these Knicks developing bad habits? Probably, but not right now. When Porzingis eventually returns, evaluating this team will take on a much different scale and gravitas. When that coveted 2019 lottery pick—whether it nets Zion Williamson, R.J. Barrett, or somebody else—finally cashes in, there will be a reckoning. The holes that this team has right now, even if some of the principal pieces find new homes along the way, will look a lot worse when winning is expected.

It seems sensible of both fans and the front office, then, to divvy up the blame for the Knicks’ compounding and confounding losses. How much of this season—redeemed only by the perverted definition of long-term success caused by the team’s upcoming draft pick—is a result of a lack of talent? How much of it is the coaching staff not utilizing its players well? How much of it is luck?

The answer is a lot. On all three fronts. We don’t often think of basketball this way, but the ability to absorb high-level offensive and defensive concepts is itself a talent. It’s not about how high Mitchell Robinson can jump, or how quick his feet are; it’s about if he can jump at the right time, and if he can move his feet to the right spot.

At the same time, Fizdale and staff have failed to hone in on any recognizable identity for the Knicks, on either end of the floor.

The Knicks average the third-most field goal attempts per game but have the worst field-goal percentage and effective field-goal percentage in the NBA. They are a poor rebounding team and have the worst assist rate in the league. They don’t create turnovers or protect the rim. They are completely unprepared to scramble after inevitable defensive breakdowns from their young, unseasoned perimeter players.

Luck has been a factor, too, and the situation might not look so ugly if Frank Ntilikina and the aforementioned Robinson hadn’t gone down with minor injuries over the past few games. Ntilikina and Robinson are both offensive zeros, but are key cogs to the Knicks’ stingier defensive lineups. The most played five-man lineup with those two—Ntilikina, Robinson, Hardaway Jr, Vonleh, and Damyean Dotson—has a preposterous 98.4 Defensive Rating over 94 minutes together. For context, the NBA’s stingiest defense so far, in Oklahoma City, has a 102.9 DefRtg.

Missing Ntilikina and Robinson means giving five or 10 extra minutes to guys like Enes Kanter, Kornet, Trey Burke, and Dotson—players who thrive at times in limited roles, but fall apart at the seams when stretched beyond those parameters. Having the two neophytes back in the lineup will nudge the needle in the right direction.

This is all a moot point at the end of the day. The Knicks need to suck; it’s the best way to get value out of this season. Porzingis coming back early, dominating the East with this young core and dragging them to an eighth seed is actually one of the least desirable scenarios imaginable for the Knicks. Their current reality, in all its miserable glory, is among the most desirable.

I hate that this is how “parity” works in the NBA, where any team without a clear map to contention has almost no choice but to tank. I hate that word the most: tank. But it’s what the Knicks should do, and, by God, they’re doing it to the best (worst?) of their abilities.

Still, the responsible thing to do is to judge this team for its faults, because anyone on it that doesn’t get traded or cut in the process will one day be expected to play winning basketball. Team effort, chemistry, a lack of a real identity—in one word, execution—all circle back to the coaching staff, and the players not developing at the rate some hopeful fans expected (although openly rooted against for sake of draft position).

The talent isn’t there yet, but the potential to develop that talent is right in front of us, plain for anyone to see, and it’s troubling that it hasn’t been mined much yet. Encouraging because it increases our chances for Zion, sure, but simultaneously discouraging because it means our team might suck, even with Zion.

Such is the conundrum of tanking teams. How much growth can coaching staffs inspire out of their young players if they’re handcuffed to the looming need to lose as much as possible?

How do they get a team ready to flip that switch and play mistake-free basketball when they do land that big rookie star or that max-contract free agent?

Every team knows how to get to rock bottom. Most don’t know what to do once they get there.