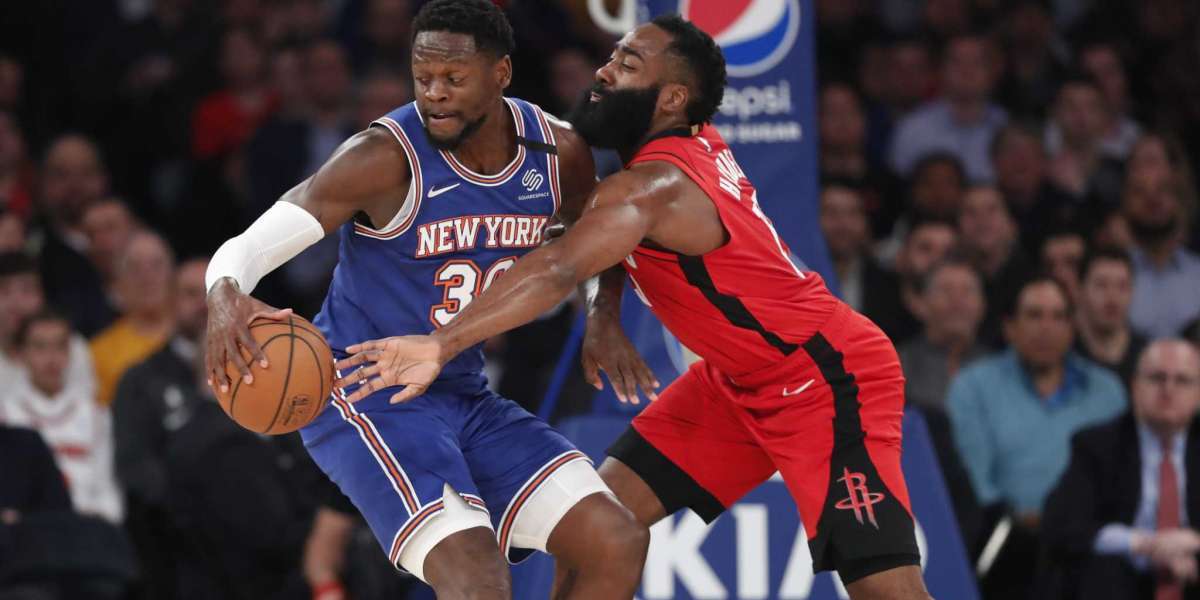 RJ Barrett tied his career-high in points on Monday at the Garden, with the Knicks preserving their lead down the stretch against the Rockets.

The New York Knicks (19-42) rose to the occasion in the inaugural game of Leon Rose’s tenure as the team’s president of basketball operations. The Knicks defeated the Houston Rockets (39-21) in a nail-biter at the Garden, 125-123.

James Harden and Russell Westbrook led the charge for Houston. Harden recorded 35 points and eight assists on 8-of-22 from the field and Westbrook tallied 24 points and nine rebounds on 9-of-19 field goal shooting. Robert Covington and Danuel House Jr. each scored 20 points, with Covington adding 13 rebounds.

Just like the first quarter of their meeting last week, the Knicks kept it close with the championship-contending Rockets. After failing to record a made field goal in the first three minutes, the Knicks strung together a 9-0 run to take their first lead of the game.

The Knicks led by five after the first quarter and pushed their lead to 12 points in just 90 seconds. Wayne Ellington helped extend the lead further (as far as 21 points) by drilling four triples.

MAKE IT WAYNE DOWN ON MEEEEEE pic.twitter.com/VzwA75hzBO

The Rockets chipped away at the lead behind eight points each from House Jr. and Covington. By halftime, New York led 73-63. The Rockets shot just 32.1% on three-pointers but made all 16 of their free throws. Meanwhile, the Knicks shot 52.1% from beyond the arc and 8-of-9 from the free throw line.

The Knicks opened up the second half with a 12-4 run in four minutes. Houston’s offense went cold, going 1-of-7 from beyond the arc to start the third quarter. The Rockets offense began to heat up, though, bringing the game back to 10 points on a buzzer-beating step back triple from Harden.

The Rockets brought the deficit to four points in the first 90 seconds of the fourth quarter, prompting a timeout from Mike Miller. New York pushed the lead further, going up by 10 with six minutes remaining.

Harden put up six points on consecutive possessions to bring the game to three points with four minutes remaining. An explosive dunk from Westbrook brought the game to two points with 1:27 remaining. Westbrook took it to the hoop again to cut the lead to one after Randle added a free throw.

Both teams missed shots on the ensuing possessions and then Barrett and pushed New York’s lead back to three with 7.6 seconds remaining.

ROWAN BARRETT JR WAS BUILT FOR THIS pic.twitter.com/MEFgCOHb3a

After two free throws from Westbrook and one from Randle, Houston found itself down two points with 4.6 seconds left. Westbrook’s pull-up jumper from the free throw line was no good, giving New York the upset victory.

R.J. Barrett had it going on early in the game. The rookie recorded 14 points on 4-for-8 shooting, including 2-of-4 on treys, in the opening period.

Headband Ro exposed the small-ball centric Rockets’ defense by getting to the rim like clockwork. He finished the first half with 19 points on 7-of-11 shooting, including 3-of-6 from behind the arc.

Rowan Jr. is my lord and savior pic.twitter.com/6RUye7E9ob

Barrett kicked off the second half by converting on a layup through contact. He missed the free throw, but Taj Gibson rebounded the miss, kicked it to Barrett, and the youngster drew another foul and converted on both free throws.

Miller didn’t do Barrett any favors in the fourth quarter. Despite clearly having the hot hand, Barrett played down the stretch with one good shooter (Maurice Harkless). Miller also opted to play Randle down the stretch, negating any space Barrett had to drive.

Still, Barrett was able to score a clutch layup to push New York’s lead to three in the final seconds. He finished with 27 points on 10-of-18 from the field, 3-for-8 from behind the arc and 4-for-7 from the free throw line. He also tallied five rebounds and four assists.

As previously mentioned, Wayne Ellington caught fire in the second quarter, dropping in four three-pointers on five attempts. He finished with 15 points on 5-of-8 shooting from deep.

Mitchell Robinson was a monster on the boards, reeling in 13 rebounds in 24 minutes. The big man also scored 12 points on 5-of-8 shooting.

Frank Ntilikina played a solid game on both ends of the floor. His scoring was efficient—11 points on 5-of-10 shooting—and he provided some crucial defense late in the game, including the final possession stop on the former MVP Westbrook. Bobby Portis also had an efficient scoring night, recording 15 points on 6-of-10 shooting.