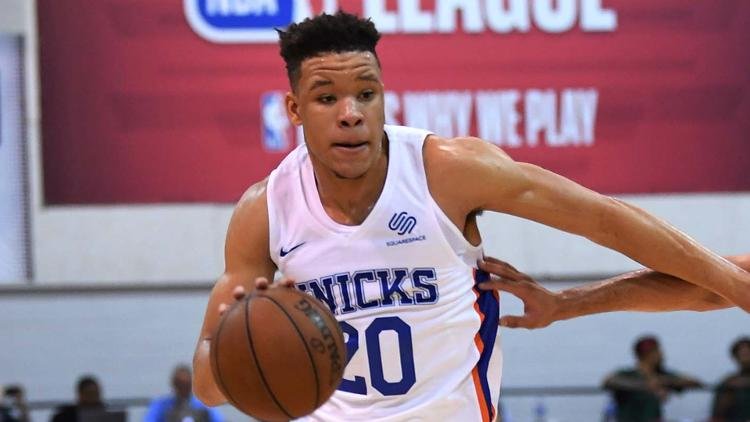 The New York Knicks will participate in the NBA’s annual Summer League in Las Vegas, Nevada, a tradition to give reps to young, developing players and showcase peripheral talent seeking a second chance in the professional basketball league.

Here are the confirmed rostered players for the Summer Knicks and the team’s schedule and matchups to look forward to, with David Fizdale coaching.

Kadeem Allen*: Allen flashed a few nice games during his stint with the Knicks following signing a two-way contract with the organization. Clearly New York wants more looks at the 6-3 point guard known for stout defense.

Tim Bond†: The 6-6 guard, who turns 24 in September, went undrafted in 2018 after playing four years at Eastern Michigan. SNY reports Bond, who played with the Houston Rockets G League affiliate Rio Grande Valley Vipers this past season, has signed up to play on the Knicks’ Summer League team. Bond averaged 8.6 points, 4.0 rebounds, 3.0 assists, and 2.4 steals per game in his MAC career and averaged 3.0 points and 1.3 rebounds in only four games played in the G League.

Markel Crawford: Crawford has been confirmed for the Knicks’ Summer League team. He went to the University of Memphis for three years before transferring to Ole Miss and declaring for the 2018 NBA Draft, going undrafted. The 6-4 guard Memphis native played with his hometown’s Summer League team this time last year and got an invite to play with the G League team, too.

Amir Hinton: The 22-year-old guard, at 6-foot-5, was signed quickly following the 2019 NBA Draft when the Division II athlete went undrafted. Hinton is a gifted scorer, leading Shaw and D2 with 29.4 points per game this past collegiate season and signed an Exhibit 10 contract with the Knicks. Adam Zagoria reported Hinton, along with King, will play for the Knicks’ Summer League squad.

Zak Irvin: An undrafted 6-6 shooting guard that played his last two seasons with the Westchester Knicks will get a spot on the team’s Summer League roster, per Sky Sports’ Mark Deeks. Irvin played four years at Michigan, averaging 11.3 points, 3.7 rebounds, and 2.0 assists over that span.

Lamar Peters: The diminutive Peters, at 6’0′, will participate with the Knicks in Vegas, the Mississippi State point guard told the world via his Twitter account. Peters averaged 12 points and 5.2 assists per game his junior season in the NCAA before going undrafted in 2019. The 21-year-old is a gifted shooter, notching 38.6% of his three-point attempts and sinking 2.5 per game.

Kenneth Smith: “Speedy” will be on the Knicks’ Summer League roster, per SNY’s Ian Begley. The 26-year-old Smith played four years at Louisiana Tech before going undrafted and later playing in the G League for first the South Bay Lakers and most recently the Grand Rapids Drive. At 6-foot-3, Speedy averaged 1.6 steals last year in the developmental league.

Allonzo Trier*: Trier signed a two-way contract with the Knicks this time last year before having a breakthrough early-season performance, earning him a new contract when the 45-day one expired. The Knicks exercised their team option for next season, thus bringing the 6-5 Arizona product back into the fold. Forbes’ Tommy Beer reports Trier and his rising sophomore class on the Knicks will participate in Summer League.

R.J. Barrett*: The Knicks’ first-round pick, third overall, will make his Summer League debut in July, per NorthJersey’s Chris Iseman. The 6-7 wing has updated his shot with trainer Drew Hanlen, infamous for meddling in Markette Fultz’s form (although Fultz had thoracic outlet syndrome). Barrett will face off against former teammate Zion Williamson in both the Knicks’ and Pelicans’ first game of the Summer League.

Ignas Brazdeikis*: New York’s second-round pick, another Canadian, played his one and only collegiate season at Michigan, earning the Big Ten’s Rookie of the Year honors. At 6-foot-7, “Iggy” is a sharpshooting, swaggering, and confident stretch 4.

V.J. King: King is an undrafted free agent signing by the Knicks, shortly confirmed following the draft on June 20th. He’s an unremarkable 6-6 small forward. The 22-year-old played three years in the ACC for Louisville.

Kevin Knox*: After a ridiculously entertaining and promising Summer League outing last year, Knox’s freshman campaign for the Knicks had its ups and downs. Despite earning Rookie of the Month in December in the Eastern Conference, Knox later did not make an All-Rookie team and only was called up to the Rising Stars Challenge exhibition during All-Star Weekend due to an injury to Lonzo Ball. Beer reports Knox and the other former ‘Bockers rookies will play again in Vegas.

Kris Wilkes*: The Knicks signed the undrafted Wilkes to a two-way contract, the same one they signed Trier to this time last year. He’s a 6-foot-8 wing at 20 years old who last played his underclassmen collegiate years at UCLA. New York was reportedly surprised Wilkes went undrafted. Deeks reports Wilkes is playing in the Summer League for New York.

Andrew White III: White went undrafted in 2017 and has since bounced around a few G League teams and played for Minnesota and Cleveland’s Summer League teams the past few years. He’s a 6-foot-7 forward who will likely get more playing time after the sophomore Knicks stop being involved.

The Post‘s Marc Berman reports Wilkes is “under the weather” and will not play in Summer League.

Tyler Cavanaugh: The 6-9 power forward from Syracuse, New York, split his college years playing first for Wake Forest then transferring to George Washington University in Washington, D.C. Cavanaugh declared for 2017 NBA Draft and went undrafted. He would later play for Atlanta’s G League team and most recently he played for the Utah Jazz as a two-way contractor. Eric Woodyard of Deseret News reports Cavanaugh is on the Knicks’ Summer League roster.

Henry Ellenson: Ellenson played with the Knicks after being waived by the Pistons last season. The Post‘s Marc Berman reports he’s joining the Summer League squad. The 6-11 Ellenson, who’s 22 years old, is more a stretch four than traditional power forward or center. He appeared in 17 games with the Knicks and gets a Vegas invite.

Mitchell Robinson*: The Knicks’ arguably brightest rising sophomore will indeed play in the Summer League, albeit in a limited engagement. Beer reports the second-team All-Rookie will play in “at least two games.” and Trier and Knox will be on the roster, too.

Kenny Wooten: Wooten enigmatically tweeted late Monday night on June 24th “New York Knicks.”, leading to the belief that he signed with the team to play in the Summer League. He’s a 6-foot-9 forward who declared for the draft alongside Louis King. Wooten averaged 6.4 points and 4.7 rebounds per game in two years with the Ducks and is better known for his defense. The Post‘s Marc Berman confirmed Wooten is playing for New York.

The Knicks open their Summer League adventure with an already much-anticipated matchup: first and third overall picks and former Duke teammates Zion Williamson and R.J. Barrett face off as the Knicks and Pelicans play in the desert. That game is Friday, July 5th at 9:30 p.m. ET, televised on ESPN.

Then, the ‘Bockers play the Phoenix Suns, hot off a confounding NBA Draft in which they possessed the sixth overall pick and instead traded down to acquire Dario Saric and draft 23-year-old Cam Johnson at 11. The Suns’ roster, like the Knicks’, is equally bereft of talent, so outside of ostensibly rising sophomore Mikal Bridges’ (who the Knicks passed in last year’s draft) presence, this matchup is a low coming off the Zion high.

New York plays the reigning champs Raptors’ Summer League team after that. Like most contending teams, this roster isn’t as interesting as the rebuilding ones.

The last preliminary matchup for the Knicks is against the Lakers, whose roster is … TBD. They traded for Anthony Davis a few days prior to the draft and eschewed Brandon Ingram, Josh Hart, and Lonzo Ball. A lot of the Lakers’ Summer League players will likely be fighting to make the big-league team’s roster.

†denotes unconfirmed player on the roster

This story will be updated when new information is presented.