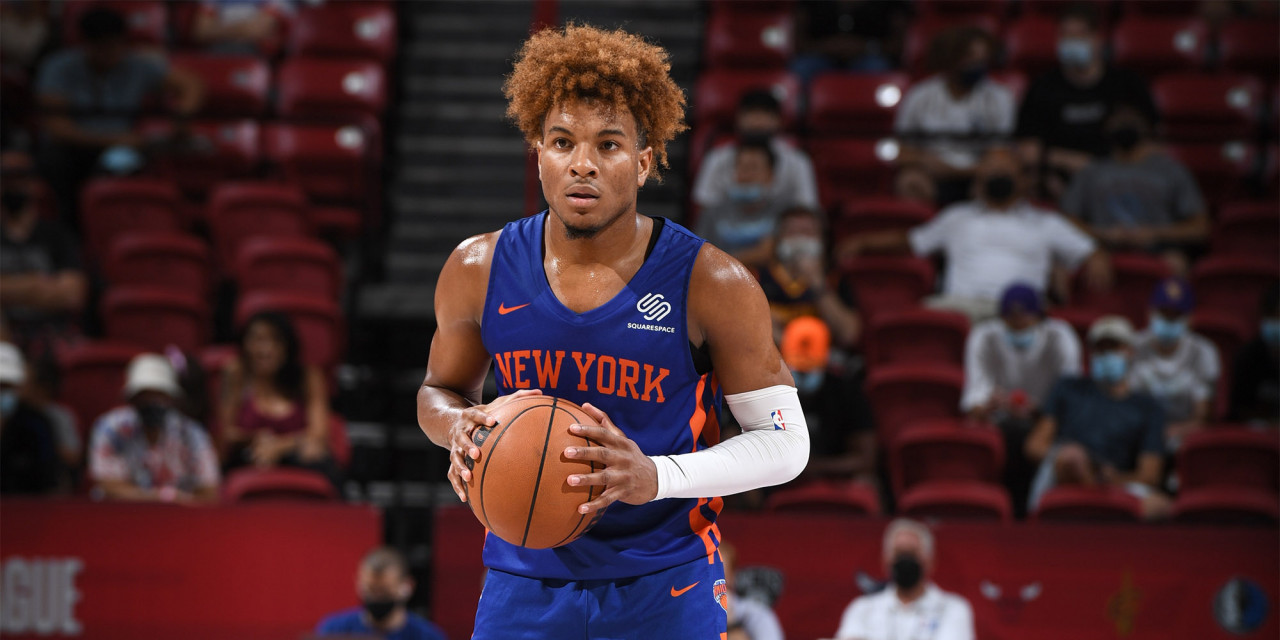 Who’s up and who’s down? The Knicks are more than halfway through NBA Summer League, with the rookies and sophomores showing out.

The New York Knicks are nearing the final stretch of the Las Vegas Summer League. Four out of six games in, and the squad stands at 2-2. But the NBA’s Summer League isn’t about win/loss records; it’s all about preparing the junior players for the NBA game. Having faced off against top rookies such as Scottie Barnes, Cade Cunningham, and Chris Duarte, rest assured the young Knicks were able to get a taste of what it’s like competing against NBA talent.

After the initial game or two of Summer League is when trends begin to emerge, and the league-ready players start to separate themselves from journeymen. It becomes more apparent who’ll be fighting for a roster/rotation spot and who’ll spend the season overseas. Let’s check up on the Knicks’ kids and see how they’re performing in Summer League to this point. First up are the sophomores, followed by the rookies.

Immanuel Quickley and Obi Toppin have been New York’s stars of the Summer League. The second-year pros are averaging a combined 45.3 points per game thus far, the former putting up 21.8 and the latter 23.5. Aside from the Miami Heat, the Knicks are the only team in Summer League to boast two top-15 scorers on the same roster. The sophomores have served as the straws that stir the Knicks’ offense, with mostly positive results to show for it.

Starting with Quickley, he’s staked his claim among the most offensively talented players in Summer League. His patience and confidence appear to be at an all-time high, as he’s effortlessly getting to his spots on offense and scoring the ball from all three levels. Yes, his recent efficiency from deep has left a bit to be desired (3-for-13 on threes over his past two), but fans shouldn’t expect him to replicate his regular-season clip with such a heightened usage rate.

The Float 🐐 IQ strikes again! Up to 31 points and 8 assists. pic.twitter.com/zGeeH4w3zy

The important thing is that Quickley’s embraced his role as a leader both on and off the court, shouldering the scoring/creation load and coaching his teammates during intermissions. Quickley’s made contributions on the defensive side of the ball as well; he’s been active in the passing lanes, which has resulted in forced turnovers (averaging 1.8 steals per game across four outings). All signs point to Quickley being an important part of New York’s point guard depth come October.

Quickley’s partner-in-crime, Toppin, has been equally promising. His aggressiveness in attacking the rim has noticeably leveled up from year one, and so has seemingly his strength, as he looks improved banging with bigs down low and has dominated the glass, snagging 9.4 boards per game. Most notably, he is fresh off a 31-point, nine-rebound masterclass against the Pistons, in which he converted 13-of-20 shots and two of five treys.

IQ behind the back to Obi in transition for the trey ball! pic.twitter.com/sQ33hqwGyR

All in all, Toppin and Quickley have performed up to expectations, if not exceeded them. Both have had recent outings where they’ve laid eggs, but they’ve rolled with the punches that come with being a de-facto offensive creator at the highest level. This experience should serve as a great confidence booster for two players whom the Knicks view as instrumental to their future success.

The Knicks’ 2021 draft class could end up being of the most impactful of recent franchise history. Jericho Sims, Quentin Grimes, and Miles McBride have all performed to varying degrees in their short time with the ‘Bockers, and all bring unique skill sets to the table.

Sims, the late second-round pick, rested the fourth Summer League game versus Detroit. However, in game three versus Los Angeles, the big man made his presence felt. In 31 minutes, he dropped seven points, blocked two shots, and finished with a +17, the second-best on the team. Sims is a freak athlete who has a relentless motor and never takes a play off on either end. Offensively, his game is simplistic but he’s a constant threat to finish above the rim, as evidenced by his handful of highlight slams throughout his stint in Vegas. And on defense, he’s proven himself to be a menacing interior anchor who skies to contest shots (one block per game in Summer League) and moves well laterally for a big. Even though he won’t play much for the Knicks next season, there’s reason to be hopeful he’ll develop into a rotation mainstay in due time.

JERICHO SIMS CAUGHT A BODY ON THIS DUNK 😳 pic.twitter.com/P45NRvSRBC

Then there’s Quentin Grimes, the three-year man out of Houston. To put it bluntly, he has underperformed in a major way. Now, that doesn’t mean it’s time to hit the panic button or anything of the sort. It’s only a few games of Summer League, and there have been plenty of neophytes who’ve struggled in Summer League and went on to became great players.

Still, Grimes, prized foremost for his perimeter prowess, hasn’t really been able to find the range from the outside. Across the opening three games of Summer League, he averaged just 7.7 points on 26.7% shooting in 34 minutes of action. Though Grimes somewhat bounced back in game number four with a respectable 6-for-10 shooting display and 15 points, it wasn’t enough to redeem what has been a wayward Summer League. Knicks faithful will need to be patient with Grimes as he searches for his rhythm against the world’s best.

Deuce McBride, the last of New York’s trio of rookies, is playing like someone deserving of regular-season minutes. Besides Quickley and Toppin, McBride has been New York’s greatest all-around player in Summer League and unquestionably their top irritant. He’s made life hell for opposing guards by picking them up 94 feet from the basket, Patrick Beverley style. And on the other end, his shot-making ability on and off the ball has been on full display of late. On Wednesday, McBride lit Los Angeles up for 22 points off the bench and swished all six threes. He worked into these long-range opportunities in various ways, from taking his man off the bounce to merely spacing the floor in the corner.

However, McBride followed up his standout showing with a dud against Detroit. He ended up dropping just four points on 14 field-goal attempts and fouled out after 26 minutes. His last two games have been as up and down as it gets, but playing against Cade Cunningham is what dug him in with foul trouble versus Detroit. There’s no shame in being outclassed by a star in the making. All fans can ask of him is to take these lessons from going against the best and learn from them. McBride’s shot is streaky, and he plays a bit overzealous on defense at times. Still, the competitive spirit and swagger with which he plays, especially on defense, is enough to warrant consideration for a back-end rotation spot in 2021–22.