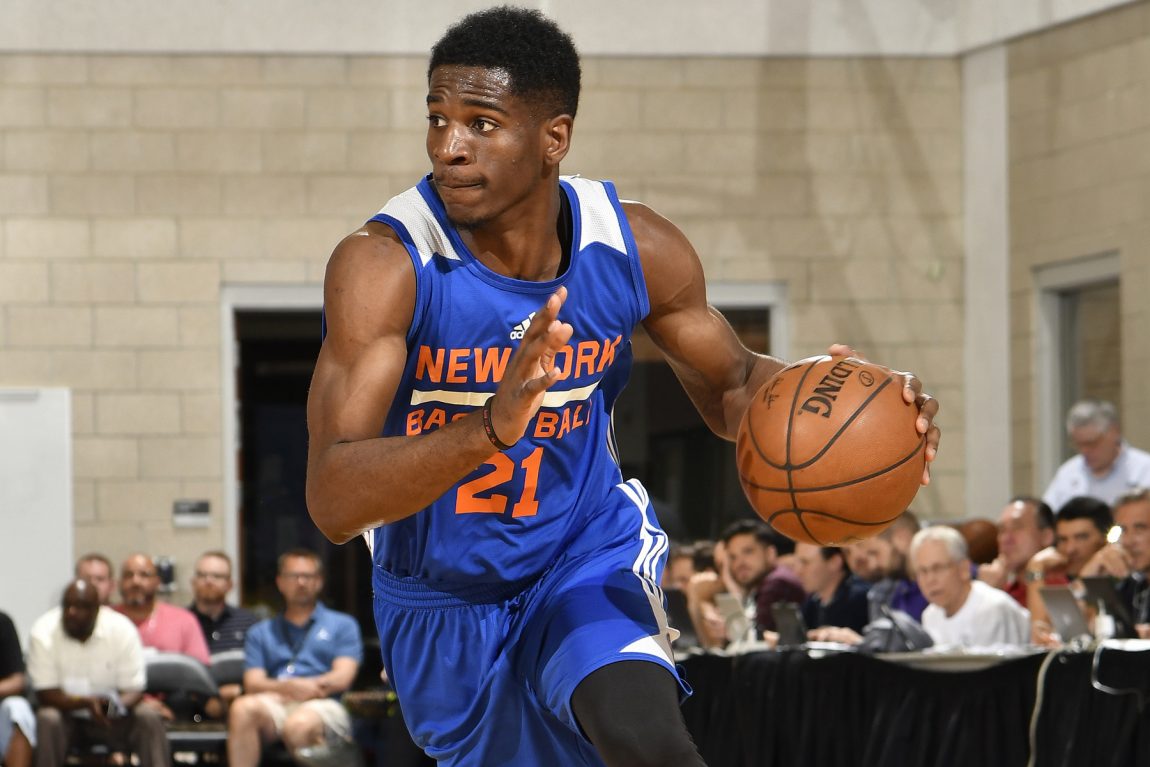 The excitement of a young roster will soon culminate in Las Vegas, with Frank Ntilikina and company prepared to show off their skills.

The New York Knicks tip off their 2018 NBA Summer League campaign against the Atlanta Hawks on July 7 in Las Vegas. Summer League, really, is an annual uber-NBA-networking event masquerading as a meaningful basketball tournament. In a relentlessly non-stop NBA calendar, the NBA community and fans alike understandably treat the two-week “offseason” tournament with a casual, somewhat token, shrug-like level of interest.

This year is a little different for the Knicks, though, with shiny new head coach David Fizdale and his staff getting their first chance to walk the walk, after a summer of convincingly talking the talk. With back-to-back lottery picks Frank Ntilikina and Kevin Knox set to suit up, along with promising second-round picks Damyean Dotson and Mitchell Robinson, the Fiz Kids will be on full display in Vegas.

Jack Huntley, Clay Kaledin, and Aaron Summers compare their summer league wish lists—what they’d like to see from the neophyte Knicks squad as they duke it out in Las Vegas.

At the top of my wish list is seeing the new and improved Ntilikina. In all his chiseled glory, one inch taller, with at least 274 summer workout videos under his belt. It’s amazing how Knicks fans—myself included—have taken to Frank, after what was not the most exciting rookie season. There is just a certain likability about the French Prince, who has folk-hero status in New York largely off the back of various tantalizing 60 second highlights and workout montages.

Maybe this is more representative of the Knick fan base’s raw hunger for a winner to invest in, for a successful rebuild, for the long-term view that Ntilikina symbolizes, than of the 19-year-old himself. Maybe. But there are very real, very rational reasons for the hype too. We know the defense is real, the athletic tools are real, and now we know the work ethic is real.

Nothing would make me happier or more excited than Frank showcasing the fruits of his offseason labor at Summer League (he was noticeably absent last year). A tight handle, an aggressive mentality, and confident shooting stroke would be the most welcomed areas of improvement. We shouldn’t have to wait long for some trademark straight-jacket defense either, with Trae Young and the Hawks in the first game. Now that will be a fun matchup!

I can’t wait until Frank holds Trae Young to 20 percent from the floor—that first matchup sure is juicy. I agree that Frank has an excellent opportunity to step up his offensive play and establish himself as a leader for this squad. It’ll be interesting to see how Knox is used in that regard, as well. He established himself as a legitimate offensive weapon at Kentucky, and I wonder if coach Mike Miller (of the Westchester Knicks) will make a point of running the offense through Knox despite the relative seniority of players like Ntilikina, Dotson, and Luke Kornet.

All that being said, what has me most intrigued about this summer league squad isn’t their offensive potential (no offense to the offensive juggernaut that is Isaiah Hicks), but rather their potential to run heavy-switch, NBA-ready defensive schemes. As Tim Kohut covered last month in his excellent feature on position-less Knicks basketball, New York has several young players capable of guarding multiple positions, many of whom will feature in the SL squad.

With the likes of Ntilikina, Dotson, and Knox making the trip to Las Vegas, Miller has a real opportunity to test out new defensive ideas and help Fizdale figure out how to end the Knicks’ struggles on that end of the court.

Frank has already established himself as plus-defender in the NBA—a versatile defensive presence that excels defending pick-and-roll sets as well as in isolation. With the news that Frank is still growing (he’s now listed at 6’6”), will Fizdale and Co. begin to throw a more varied defensive workload his way? I’d love to see Frank sticking to the best offensive player on every opposing team in Summer League.

Dotson proved himself to be a capable defender in his limited play time last season, but questions remain about his ability to guard larger wings and forwards. Dot certainly has the frame and athleticism to develop into a multi-postitional defender—all the more reason to experiment, in my mind.

Kevin Knox is the biggest unknown for the Knicks this summer, on both sides of the ball. Knox struggled to stay focused as a defender in college, but he has the size and overall athletic ability required to defend well at a NBA level. Knox’s ‘tweener’ status as a slight 6’9” wing would have made him an undesirable prospect just a few years ago. In today’s game, however, he can theoretically function as both a small-ball 4 and a more traditional 3. Given Kristaps Porzingis’ struggles guarding stretch 4s out to the perimeter, experimenting with the relatively fleet-footed Knox at the power forward position should be a priority this summer, and beyond.

With Frank, Dot, and Knox at 1-3, there’s a lot of potential to switch early and often. Maybe Mitchell Robinson can translate his obvious athleticism into defensive acumen. The Knicks have been terrible at defending (especially out to the perimeter) for years now—I think it’s time to try something new. Why not in the low stakes Summer League?

It’ll be interesting to see how much the summer league staff plays with the rotations and how players are moved around. Since Frank, Dot, and Knox will be on the regular season roster, there’s no reason not to test out their switchability and find out strengths and weaknesses by moving them all over the court defensively. Hopefully Mike Miller doesn’t take Vegas lightly because working on heavy-switches and position-less lineups now would make Fiz’s job a bit easier come training camp.

That said, Frank easily has me (and probably all of us) the most excited about July 7. I really hate getting excited over summer workout videos, but you can definitely see improvements he’s made. The handle looks tighter, his shooting motion looks more and more effortless each time he shoots, and he’s starting to grow into his body. It’s about putting all the tools together now at this point.

There won’t be an overnight switch where he’s dropping 30 a game here, but I expect him to look a lot more comfortable and confident on the offensive end. As Jack mentioned earlier, Frank’s development is huge for the speed and success of the Knicks’ rebuild, so there’s legit reason to pay close attention to his Vegas play. Jack and Clay have it spot on; that Ntilikina vs. Young matchup should be a blast.

This year’s summer league squad will be a great look into the Knicks’ future with Ntilikina and Knox playing with each other for the first time, along with the new staff coaching. Personally, I’m excited to watch Knox because I didn’t see him play much at Kentucky other than the highlights I saw coming into the draft. In a perfect world, he shows out with some high scoring games while putting in the effort defensively that’s been questioned from him coming into the league.

It’s wild how much Summer League has grown over time and how much more excitement around the league it brings about each July. For the Knicks, this is a fairly strong roster that can make some noise. It would be cool to have a strong Vegas showcase and show off that the future is bright in New York.