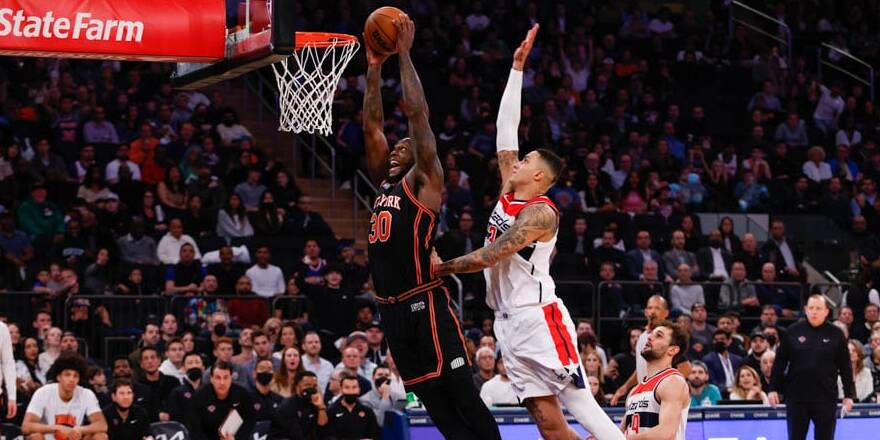 The Knicks held on for the win against old friend Kristaps Porzings and the Wizards, making it two straight wins at home.

The New York Knicks (30-40) defeated the Washington Wizards (29-40) by a final score of 100-97. For Washington, Kristaps Porzingis finished with 18 points and 11 rebounds while Kyle Kuzma had 18 points, nine assists, and five rebounds. For New York, Julius Randle led the way with 18 points, 17 rebounds, and four assists while Evan Fournier finished with 15 points and five made threes.

It was a back-and-forth game between two teams on a similar level. Washington did a good job keeping New York’s guards at bay early, which led to a strong start from Julius Randle. Randle’s aggressiveness offensively not only led to some good looks for himself but for others as well, creating a few good looks to both Evan Fournier and RJ Barrett, even if they didn’t fall.

And although 18 assists is a low total, I found New York’s passing to be excellent tonight. Randle’s passing is well-known, but I found Evan Fournier showed some good passing—especially when the shot started falling, the Wizards started to keep another defender in the distance of Fournier and he did a good job finding the open man. Barrett and Immanuel Quickley also did well managing the offense.

While New York had Randle and some of Fournier carrying the offense, the Wizards put forth more of a team effort. Kuzma was active in attacking the paint, Porzingis and Corey Kispert were the recipients of some open outside looks and Daniel Gafford worked on clean-up duty, collecting offensive rebounds and Knicks mistakes.

Once Barrett started heating up, New York’s offense took another level. Barrett did an excellent job with some decision-making on the ball, whether it be attacking Washington’s un-even defense at the basket, or, taking what the defense gave him in the form of a mid-range jumper or outside attempt. New York’s offense shifted in a positive way, and Barrett was a key benefactor in their turnaround.

The second half saw the game start with both teams starting with back-and-forth threes and getting out of hand in the form of a New York double-digit lead. Washington’s team efforts went flat when they couldn’t find the right combination of players to chip into New York’s lead. There were flashes, led by a few interesting offensive possessions by Rui Hachimura and Porzingis getting semi-aggressive for some free throws,  but Washington couldn’t get anything going.

Then the feeling came. The familiar one. Washington was cutting into the lead. Randle couldn’t hit anything, Barrett couldn’t hit anything, and Alec Burks missed a pretty good look from the corner. Meanwhile, Kyle Kuzma knocked down some unreal threes, putting the Wizards within one in the final minutes. The magic ran out, however, with Kuzma missing a three, Barrett knocking down two big free throws, and Kentavious Caldwell-Pope air-balling a game-tying attempt.

»READ: 2022 NBA Draft: What to Watch in the NCAA Men’s Tournament

»READ: Cam Reddish’s Season is Over, but his Time With the Knicks is Just Beginning