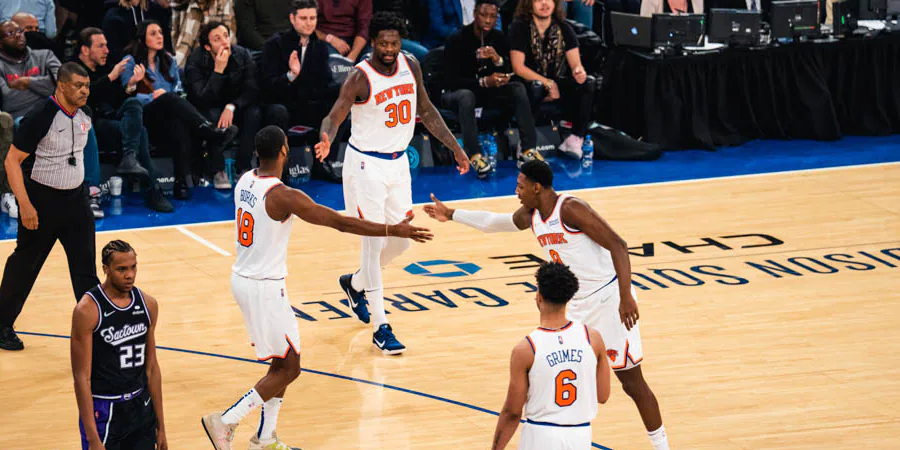 NEW YORK, N.Y. — It has been said that doing something for 10,000 hours can make you an expert. Over 51 games, the New York Knicks have played a total of 2,458 minutes. For those who don’t want to do the math, that’s only cracking nearly 41 hours. And, over the course of the current season for New York, it’s obvious that no level of team mastery has truly been accomplished. Blips here and there have provided some semblance of a functioning unit, but we have yet to see the grit and energy of last year’s team that got them into the playoffs outright.

Monday night, the Sacramento Kings arrived at the Garden and may have provided the boost that the recently struggling Knicks needed, badly. Before tonight’s blowout against the floundering Kings, New York was on a three-game skid. Granted, their losses came against last year’s championship winner Milwaukee Bucks, the current first-place Miami Heat, and the resurgent Cleveland Cavaliers. However, these losses came about from play that has become far too familiar for the Knicks, namely from their starters: porous defense, poor shot selection, and a pace in dead last among league starting units.

Before Monday’s game, head coach Tom Thibodeau spoke on how the quick pace of Sacramento’s starting backcourt of De’Aaron Fox and Davion Mitchell helps the Kings to stay aggressive. He said that their pacing makes them interchangeable, and he looks for that pushing style in Julius Randle’s time on the court.

“We have to play with more pace, push the ball ahead more,” said Thibodeau. “Defenses have locked into him pretty good. We have to figure out how to get him out before the defenses get set.”

The gas pedal was pushed hard by New York—and Randle benefitted. He looked more to his form from last season, finishing up with 17 points and nine boards in 29 minutes. His cutting and his ability to seek out the open man were solid, and he finished with four assists on the night. Evan Fournier, who also had a nice bounce-back game with 18 points (16 in the first quarter), was Randle’s usual go-to when trying to escape the double-team calamity that has stricken him for much of this season.

On the defensive side of things, the Knicks looked far more present. While Buddy Hield may have been left open too many times for comfort, they looked markedly improved in their closeouts. The team finished with 12 steals and 22 points off of forced turnovers. Many of those steals and much of the pressure applied to the Kings led to fast-break opportunities, which amped up the pacing quite a bit for both the starting unit and the bench.

“Obviously it starts on the defensive end of things if we can get a stop,” said Randle, referring to New York’s success with getting into sets faster. “But always throwing the ball, getting the ball up the court, getting into our sets faster. Pace is obviously fast break, but pace is also setting things up at halfcourt.”

Alec Burks snapped out of his slump, Obi Toppin & Quentin Grimes showed what could happen when they see minutes

The result was 49 combined points to propel the Knicks to victory.

Hustle plays on the defensive end certainly set the tone for a faster, more enjoyable product. Rookie Quentin Grimes, who is becoming known for his defensive acumen, emphasized this point in the postgame press conference.

“You can’t worry about getting scored on, you just gotta outwork them. Just out-hustle, try to get the other man, I just want to go out there and play extremely hard,” said Grimes.

The Knicks can only hope that this trend continues and Monday was no aberration. They face a strong opponent at home on Wednesday in the bouncy, electric Memphis Grizzlies in a matchup that will feature the marquee of Ja Morant, who was recently named an All-Star starter for the first time in his young career. New York will have to find a way to battle on defense if they want to build off of this victory.