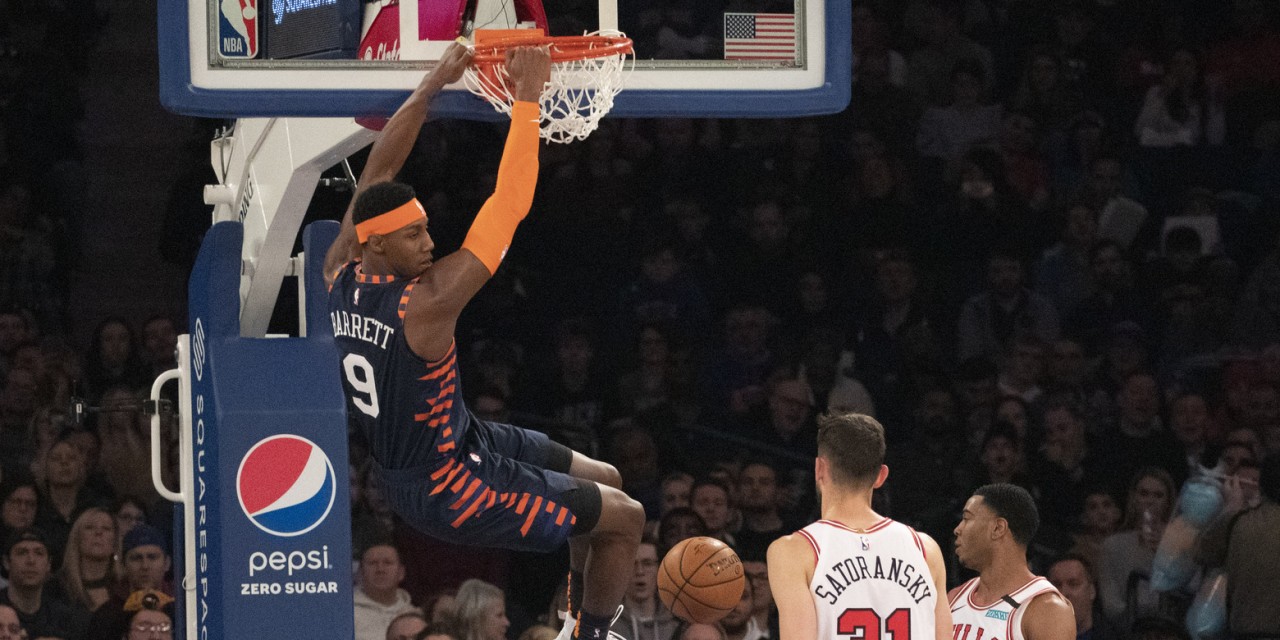 Mitchell Robinson scored a career-high 23 points on Saturday in the Knicks’ streak-snapping home win over the visiting Bulls.

A win always feels good, and a win against the Chicago Bulls (20-40) always has an extra bit of satisfaction. The Baby ‘Bockers all played well—those who did play—as they led their team to a 125-115 win to start a five-game homestand.

Taj Gibson set the tempo right away, scoring one of his first four baskets and assisting on another two baskets. Gibson, more than his veteran cohorts, knows the value in getting R.J. Barrett into a rhythm early. He fed Barrett for a dunk and a three, making sure the rook was engaged early. Gibson’s energy helped the Knicks assert themselves.

Mitchell Robinson took the baton from Gibson at center and came out catching lobs like it was no one’s business as the Knicks finished the first quarter up 31-26.

The second quarter was a regression to the mean. The Bulls caught fire from deep to grab the lead, before a Headband Ro takeover. Barrett scored 12 points on a perfect 5-for-5 shooting to spearhead a 16-3 run to end the half up 13.

“Third Quarter Knicks” were back in full effect to knock everyone back down to reality. There was way too much Elfrid Payton and Julius Randle and the results were the worst quarter of the game. The ball movement vanished, the poor shooting multiplied, and way too many Bulls were left open beyond the arc.

The fourth quarter offered a bright spot similar to the first half, with Frank Ntilikina, Kevin Knox, and Robinson getting to share the court. Knox looked the best he has in months, perhaps all season. The Bulls kept trying to come back, but finally Barrett connected with Robinson on a nice alley to cap off the win.

Miller’s lineup choices remain suspect, but he did give Knox and Robinson the proper playing time. That is progress.

Prior to the game Mike Miller said the reason Robinson is not a starter is because he is playing so well. If that doesn’t make sense to you, don’t worry you are not alone.

Robinson made Miller look like a fool or a genius, depending on your stance, by coming in red hot, scoring eight points in his first four minutes. He finished the half with 12 points on a nice 6-for-9 shooting, to go along with five rebounds (four offensive!), an assist, a steal, and a block.

He finished the game with a career-high 23 points to go along with 10 rebounds. It’s painfully obvious he is one of the best players on the team. If Miller doesn’t want to screw up his routine, fine, but at least bump those minutes up to the 30-minute range.

This may sound like a bit of common sense here, yet it still has to be said. The key to Barrett playing well seems to be extremely simple: get him the ball early. Gibson did a great job of this and the result was a comfortable, and under control, Barrett.

His first quarter wasn’t anything special but that early rhythm pay dividends in the second, where he scored 12 points and had a smoothness to his game of which we haven’t seen a whole lot.

Things you love to see:pic.twitter.com/isF3aOjG1X

When we see Barrett tossing up those wild shot attempts that have no chance of going in, you can typically trace it back to him not getting the ball early in the game. That wasn’t the case tonight and the result was the best start Barrett has had in a very long time.

Barrett’s second half wasn’t nearly as electric, and his performance from the free throw line (0-for-4) was troubling.

When RJ is under control he’s a joy to watch.

Once Barrett masters consistency he will be a fun player to watch.

The Knicks return to action Monday when they welcome James Harden and the Rockets.

»READ: The legend of Headband Barrett