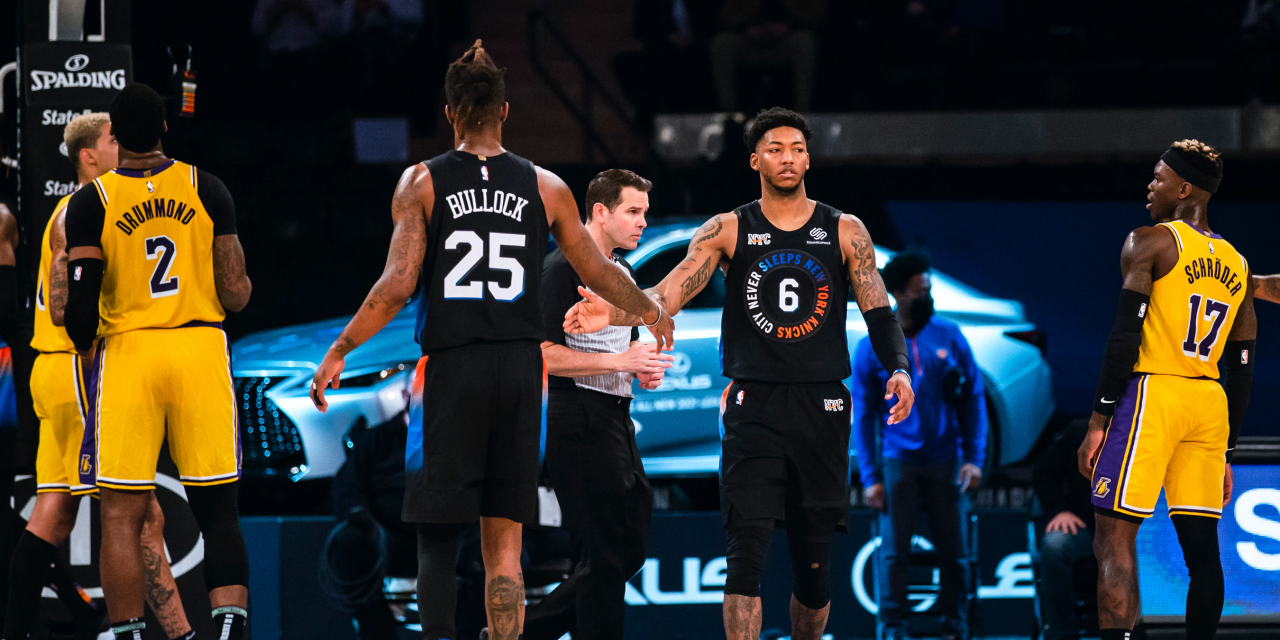 Julius Randle was key against his former team as the Knicks won their third straight game, this time against the depleted Lakers on Monday.

The importance of games like tonight continues to increase for New York as the 2020–21 NBA season near its end. After a recent rough stretch, the Knicks have now won three straight games and have improved to 15-0 at home going into the fourth quarter with a lead. In their last 16 home games, they’re 12-4 and continue to inch closer and closer to being in the postseason despite having the most difficult remaining schedule. Tonight’s win puts the Knicks above .500 on the season and in a good position, at the very least, to make the play-in tournament in the Eastern Conference.

The Knicks led the Lakers 55-52 at halftime behind the impressive first halves from All-Star Julius Randle and starting point guard Elfrid Payton. Randle opened the game in attack mode, hitting his first four shots of the game. He finished the first half with 19 points while shooting 7-of-11 from the field. Elfrid Payton chipped in with 12 points, and Derrick Rose added 10 points off the bench.

R.J. Barrett struggled to get in the scoring column against one of the league’s top defenses going scoreless in the half. Despite the offensive struggles, the second-year wing, currently in the midst of his best stretch as a pro, continued to positively impact the game. Barrett finished the half with three assists, two steals, and one block. The Lakers, without their stars LeBron James and Anthony Davis, have been one of the best defensive teams in the NBA. They are currently second in the NBA in opponent points allowed, only trailing the Knicks, per NBA Stats. In their last 11 games without their franchise cornerstones, they are 5-6, keeping them within the top six of the Western Conference and narrowly avoiding the play-in tournament for the time being.

The second half, much like the first half, was dominated by Randle and Payton. Randle continued to hit tough shot after tough shot, showcasing yet again that he is one of the best shot-makers in the Association this season. His post-fade, face-up mid-range, and step-back jumper have catapulted the 26-year-old into the running for a potential spot on an All-NBA team for all that he has done for New York on both ends. Payton, who is public enemy amongst Knicks fans, has continued to his strong play over the last two games. His defensive effort is always there, but when he is playing in control and not trying to do too much offensively, he truly can be a solid point-guard option if stand-out rookie Immanuel Quickley doesn’t have it going.

Julius Randle ended the game with an impressive stat line of 34 points, 10 rebounds, four assists, two steals, and a block. Payton added 20 points, bullying his way to the basket routinely against Dennis Schröder, who is having one of his best defensive seasons this year for Los Angeles.

Barrett came out aggressive in the second half and ended the game with seven points. Down the stretch of close games the sophomore standout has been one of head coach Tom Thibodeau’s best options for when the team needs a bucket, but tonight his offensive prowess was not needed. Barrett did not score until 5:06 remaining in the third quarter but continued to impact the game on the defensive end, giving the team crucial minutes needed to secure the win.

The Knicks play Zion Williamson and the New Orleans Pelicans on Wednesday (and again on Sunday) with another matchup with the Dallas Mavericks in between. The Mavs and Pelicans have one thing in common—they each have one of the best young and exciting players in the world in Luka Doncic and Williamson, respectively. The three-game winning streak the Knicks are currently on after tonight’s win is imperative as they’ll be heading into two big-time games against two tough opponents with a ton of momentum.

If the season were to end today, the Knicks would be in the play-in tournament. The next few games are critical to New York rising the standings to avoid the play-in games and becoming a top-six seed again the Eastern Conference.

(Editor’s note: This article was updated to correct a mistake regarding the Knicks’ upcoming schedule.)