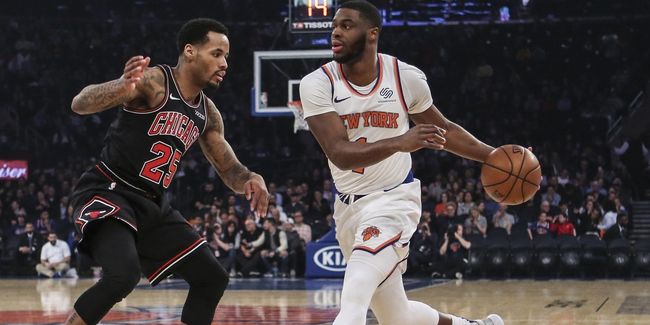 The New York Knicks snap a six-game losing streak with a relatively dominant win over the Chicago Bulls on Mitchell Robinson’s 21st birthday.

Coming off the weekend of intense Elite Eight action featuring many future Knicks, the current Knicks squared off against the Bulls in a matchup too cruel for April Fool’s Day parody.

The final month of the NBA regular season is upon us, meaning some farcical storylines will ensue as teams gear up for playoffs with most berths in hand and lottery positioning to be determined. Tonight’s contest featured many such happenings.

Hopefully these April showers of basketball misery bring May flowers in the form of a lottery victory, but for now we can only enjoy this Knicks season finally coming into the end. Let’s dive into what went down at the Garden.

Kornet and Dotson were both prolific on the offensive end tonight, shooting a combined 14-for-19 from the field and hitting a combined 11 threes on 14 attempts from deep.

Dotson put together one of his most complete games as a pro tonight, finishing with 18 points, six rebounds, and six assists as he was spontaneously thrusted into the backup point guard role in the second half due to Kadeem Allen suffering a concussion. The six assists tied a career high for Dotson, and he’s proving time and time again in this lost season that he can be a valuable contributor on a good team.

DOTSON IS ELITE 6-6 from three ??? pic.twitter.com/YXYhMxRoa9

Kornet also had one of his better performances this season, tallying a career-high 24 points, grabbing six rebounds, and rejecting three shots. The combination of Kornet’s spacing and Robinson’s mobility makes the tandem playable, at least in the latter part of a 60-plus loss season.

Battle of the Birthday Boys

Sharing the same birthday, it was only fitting the 21-year-old Robinson took the jump against the 31-year-old Lopez. Instead of beating up on a nonexistent mascot, Lopez took out his pent-up anger on Robinson and Kornet, dropping 29 points and pulling down seven rebounds, finishing just one point short of his career high.

Robinson held his own against the former Knick in his second consecutive start, scoring 14 points to go along with 10 rebounds, four assists, and three blocks, marking the 25th consecutive game in which Robinson has blocked multiple shots. He has been the lone consistent bright spot in this season, showing the potential to anchor the back line of a defense for years to come.

I would marry Mitch’s 3 point blocked shots if I could pic.twitter.com/5WCrBH1rvu

Up next for New York is a game against the Magic on Wednesday night. Orlando is remarkably fighting for a playoff spot, so tonight’s fortune will likely not be with the Knicks in their next matchup.