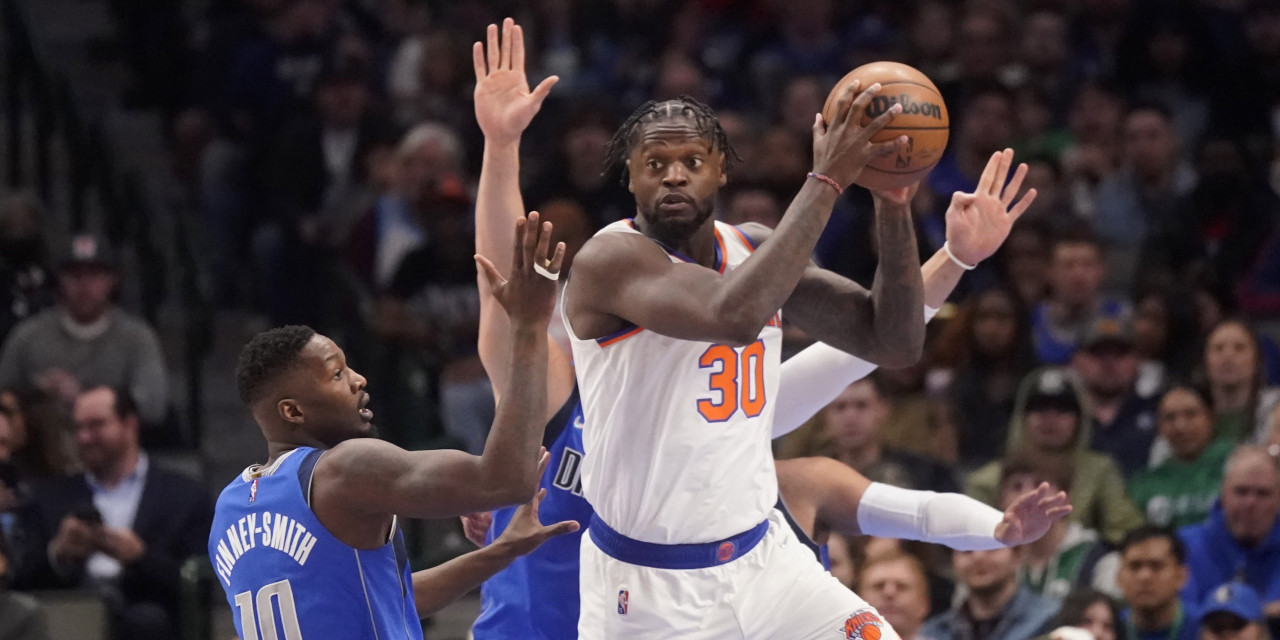 Julius Randle and the Knicks were on a mission on Wednesday night in Dallas, controlling throughout the game against the Mavs to raise their winning streak to three.

The New York Knicks (28-38) throttled the Dallas Mavericks (40-26) on the road, 107-77. The ‘Bockers managed to snap the Mavs’ five-game winning streak and simultaneously extend their own streak to three behind 26 points from Julius Randle, while RJ Barett chipped in 18 and Alec Burks 15.

For the Mavericks, Luka Doncic led the team in scoring with 31 points on 25 shots. Spencer Dinwiddie was the only other Dallas player in double figures with 13 off the bench.

On Wednesday, New York’s defense came up big, limiting the Mavs to 31.4% shooting from the field and 13.6% from three. Additionally, the ‘Bockers held Dallas to just 34 points in the first half, the least amount of points this team has given up in a half all season. At one point in the first half, Dallas was 0-for-19 from deep before hitting their first trey. The record for most consecutive threes missed in a game dates back to 2012 when the Nuggets went 0-for-22.

Let’s get to the takeaways from the wire-to-wire dub.

Mitchell Robinson doesn’t get enough credit for how solid he’s been on both ends over the last month or so. Despite receiving sporadic minutes over this time—and all year—he accumulated three double-doubles over the previous seven games heading into tonight. Robinson continued his recent trend of excellent two-way play in Dallas, notching another double-double in the process.

Mitch has been a monster tonight pic.twitter.com/xX1jf2jZcW

Firstly, Robinson ran roughshod over the Mavs on the offensive glass. In the first half alone, he snatched down three in 12 minutes—half of the Mavs’ offensive boards as a team over the first two quarters (six). Robinson’s work grabbing his teammates’ misses got him going scoring-wise as well, rewarding him with a few easy dunks en route to 11 points on the evening on flawless 4-for-4 shooting from the field.

Robinson shined offensively, but he was also valuable on the other side of the ball. Robinson, who finished with three blocks, was vital in deterring Dallas from the paint and forcing it to settle for three-pointers, which the Mavs couldn’t cash in on. While the range of Robinson’s skill set is not wide, he’s elite at what he does, and that’s rebound, defend the goal, and finish at the rim. For these reasons, the Knicks would be wise to extend him, despite his imperfections.

Randle struggled to start but turned things around

Julius Randle has mainly been excellent since the start of the new year—and torched the Kings for 46 points on Monday—but he got off to a poor start versus Dallas and seemed to be headed for his second dud over the last three games. Remember, he dropped just 10 points in Sunday’s win over the Clippers. And against the Mavs, a problem that plagued Randle, especially early in the season, reared its ugly head.

His shot selection was less than ideal for much of the game. Now, this problem has plagued Randle for arguably his entire career, even at times during 2020–21. There’s nothing wrong with Randle taking lots of mid-range jumpers or threes, but when he holds the ball and spends much of the shot clock working on getting these shots, that’s when the Knicks offense becomes bogged down like it was in the third period when Dallas went on a mini-run.

But, credit to Randle, he managed to rectify his performance from the mid-third quarter on. From the 7:27 mark of the third to the final buzzer, Randle scored 15 points and changed his 1-for-7 shooting start to a much more palatable 8-for-19. The number one factor in his turnaround was his decisiveness. When Randle catches the ball and makes his moves or passes quickly, New York’s offense rises to another level. Thanks in large part to Randle’s scoring contributions, the Knicks were able to hold off a ferocious Mavericks rally in the third to cruise to victory.

Game is almost over but Randle isn’t done 🎯🎯 pic.twitter.com/TFRUMGfYC7

The Knicks take on the Western Conference’s second-best team, the Memphis Grizzlies, on Friday in Grind City.