Knicks Take on Kawhi Leonard and Raptors Up North 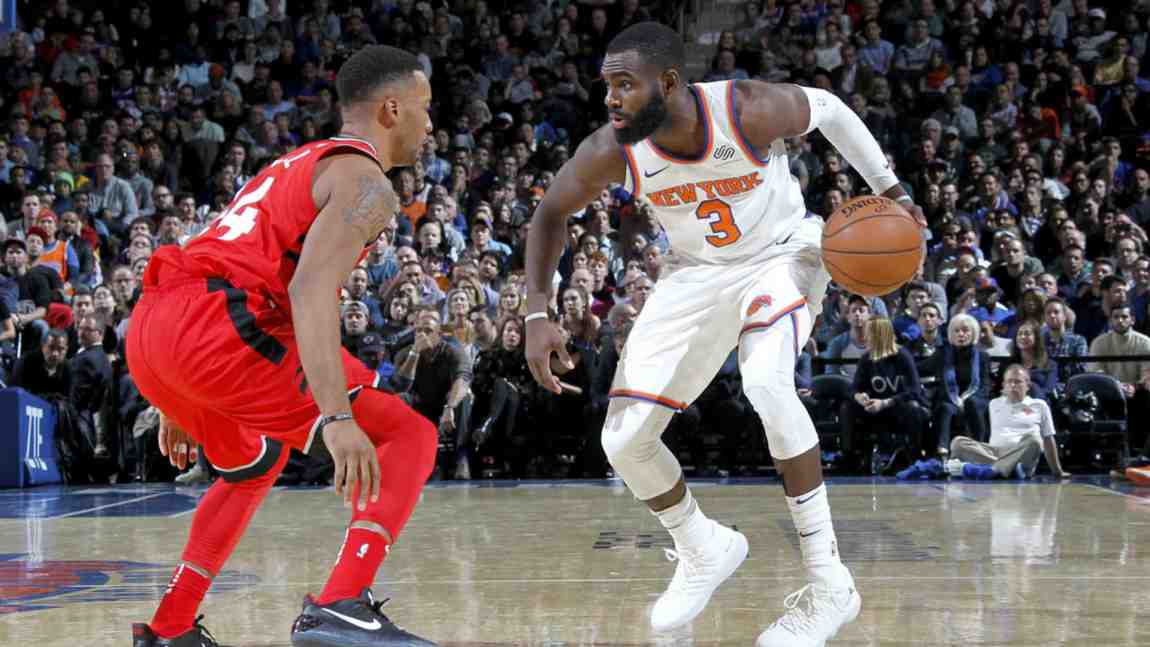 Tim Hardaway Jr. and company travel to Canada on Saturday for an Atlantic Division showdown.

Fresh off of a win and a couple days of rest, the New York Knicks (4-8) are headed to the Great White North in search of another victory. They won’t have an easy task ahead of them as they prepare to take on the red-hot Toronto Raptors (11-1) on Saturday afternoon.

Toronto enters the showdown on a five-game winning streak. Last season, the Raptors won three of four regular season meetings against the Knicks. While New York has a fresh start in a new series against Toronto, the odds will be stacked against them.

So Far, So Good

There were plenty of questions surrounding the Raptors during the offseason. After a letdown as the top seed in the Eastern Conference in the 2018 playoffs, Toronto let go of reigning Coach of the Year recipient Dwane Casey, a coach that took the Raptors to new heights and amassed over 300 wins during his seven-year tenure. However, the lack of postseason success in recent years—despite being among the top teams in the conference—gave Toronto’s management a good reason to look elsewhere. The Raptors decided to stay in-house and promote assistant Nick Nurse to the head coaching position. This is his first NBA head coaching job after previously serving similar positions overseas and in the G League.

Aside from the coaching drama, the Raptors dealt fan favorite DeMar DeRozan to acquire Kawhi Leonard from the San Antonio Spurs. DeRozan, when paired up with All-Star point guard Kyle Lowry, proved to be a valuable asset in a dynamic one-two backcourt punch. The move was met with mixed reactions, with critics questioning the Raptors’ desire to acquire Leonard for one year. After the 2018–19 season, Leonard can opt out of his player option and go elsewhere. Toronto fans were also upset to see DeRozan, who was inked to play until at least 2021, be dealt away for a potential one-year rental.

However, through the first 12 games of the season, it seems like the Raptors have been able to answer those questions and silence the doubters. Toronto has risen to the forefront of the Eastern Conference, sporting the best record in the NBA. Leonard seems to be a perfect companion for Lowry. Although DeRozan and Lowry were great friends on and off the court, having Leonard around allows Lowry to be what he is—a point guard.

With DeRozan in the starting five or sharing the floor with Lowry, the Raptors had two ball-dominant players that needed touches. Now, Lowry can possess the ball, facilitate, and set up Leonard, who can focus on looking for his shot. Leonard is averaging a team-high 26 points per game to go along with eight rebounds. As for Lowry, he’s a double-double machine. He’s averaging 17.8 points and a NBA-best 11.3 assists thus far. He has eight double-doubles thus far and is on pace to completely shatter last year’s career-high mark of 23 in a season.

As good as they have been, Serge Ibaka’s resurgence has also been key to the Raptors’ success. At 29 years old, Ibaka seems to have reinvented himself and has elevated his play to a level never seen before. He can still hold his own defensively, but his jump on offense has been well-appreciated by Toronto. So far, he’s averaging 17.7 points, and if he is able to sustain this pace, it would mark a career-high for Ibaka—an impressive feat considering he is the third option behind Lowry and Leonard.

Do It Again, Frank

To say that Frank Ntilikina locked down Trae Young would be an understatement. Shut down wouldn’t do it justice either. Ntilikina was a bulldog, got in Young’s face all night, and was there to disrupt anything he tried, making Young’s first three quarters a miserable, scoreless affair. Granted, Toronto doesn’t have Young, but they do have two players that are well above Young’s level in Leonard and Lowry. His offensive skills are still catching up to his defensive prowess, but meanwhile he makes playing defense look fun. It will be interesting to see how Ntilikina deals with his likely counterpart, Lowry.

Lowry has been shredding the competition to begin the regular season and has seemingly been able to do what he wants. He’s among the top 10 NBA point guards in assist-to-turnover ratio (3.7), and the way he is able to score is something that shouldn’t be taken lightly either. He’s an important facilitator to this Raptor team that proved against the Lakers and Jazz that it can be an absolute force—even when Leonard is sidelined with an injury.

This will be a nice test for Ntilikina. He might not keep Lowry scoreless like he did with Young—although that would be a treat—but even slowing him down, which opposing defenders haven’t been able to do so far, would be great for the Knicks.