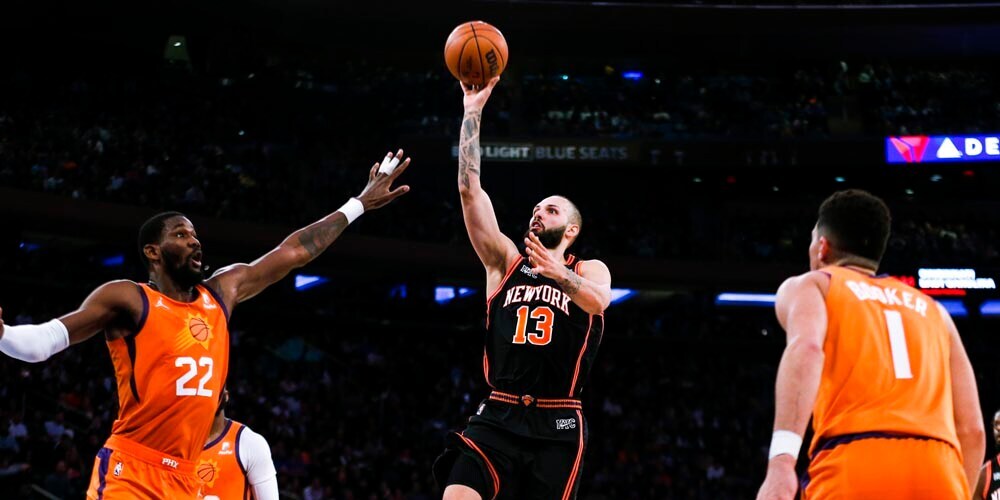 Without top guns Chris Paul and Devin Booker, could one assume the Suns are more manageable for the Knicks? We’ll see about that.

The struggling New York Knicks (25-37) continue their road trip tonight as they travel to Phoenix to take on the win Suns (50-12). After losing six straight and 13 out of their last 15, the Knicks will look to take a step in the right direction against one of the NBA’s top teams.

Reasons for the Struggles

There haven’t been many positive things to point to lately for the Knicks amongst this horrid stretch. As a team, the Knicks haven’t held an opponent to under the league average of 110 points in a game since their win against the Sacramento Kings back on January 31st. That means that streak is now at 11 consecutive games and counting following Wednesday’s loss to the Philadelphia 76ers. To go along with the recent inability to perform on the defensive end, Tom Thibodeau has been relentless with his decision to start and heavily lean on Alec Burks at the point guard spot with both Kemba Walker and Derrick Rose sidelined. While Burks is a good player in his own right, he has been in the NBA for 11 years and has carved his role out as a reliable wing scorer off of the bench—not a lead guard.

The coach’s decision to play him as the team’s lead point guard has had a major impact on not only his production but the team as a whole. You can’t necessarily fault Thibodeau for trying to find a plug for the point guard spot with both Rose and Walker out of the lineup, but you can fault him for not making any adjustments after they clearly have not worked. It has been clear for the past couple of games that the rotations are not working but Thibodeau’s stubbornness and refusal to change his rotation is now actually hurting the team as well.

Now it would be unjust of me to point out a problem and demand change while not at least providing a solution. This one, however, seems like a pretty clear fix from the perspective of myself and most Knicks fans:

Miles McBride has been balling in the G League this year, averaging 29.4 points as well as 5.6 rebounds and 9.6 assists in five games. To go along with those great stats, in limited minutes with the NBA squad he has made a meaningful impact on both sides of the ball. In December, he had a great two-way performance totaling 15 points and four steals in 36 minutes against the Houston Rockets. He has shown the ability to hold his own at the NBA level at the very least and seems to be the most logical fix to step in at the point guard spot as Burks being forced to play point guard is approaching unwatchable basketball.

The Emergence of RJ Barrett

For however many issues there are with the Knicks currently, it is still hard not to be excited about RJ Barrett and the future this team has with him at the helm. Since New Year’s Day—a 22-game stretch—RJ is averaging 23.9 points per game and, more recently, over his last six games, he has been averaging 29.5 points per game. This consistent play and the uptick in his confidence and aggression are showing on the court as well as the box scores.

Since November, Barrett has seen his free throws per game steadily rise from 3.1 to 4.9 per game in December; 6.1 in January; and most recently, 10 free throws per game in the month of February. Those numbers are great examples of RJ being more aggressive with his drives to the rim and asserting himself into the flow of the offense. It looks as if Barrett has officially turned a corner in year three and is beginning to emerge as the leader and number one option on this team. If this emergence continues, I do not think it is a stretch to say we could see Barrett representing New York in next year’s All-Star Game.

The Knicks are nauseating to watch but RJ is a killer pic.twitter.com/FrfHvu46wM

The reigning Western Conference champion Suns, on another note, are the NBA’s top team this year, winning 50 of their first 62 games. Legitimate title contenders again, the Suns are first in the West as of today. They play great on both sides of the ball, currently sitting in fourth in the league in points scored per game (113.7) as well as sixth in the league at opponents points scored per game (105.6).

A team that can get it done on both sides of the court at a very high level is a hard team to beat in a seven-game series. They are coming into tonight off of a 30-point rout against the Portland Trail Blazers on Wednesday night. That impressive win comes without their top two players, Chris Paul and Devin Booker. Paul has been out for a little over a week now with a fracture of his right thumb, which will keep him sidelined for at least another four-to-six weeks. He should be ready to go in full force for the playoffs, however. Booker was out Wednesday after landing in COVID-19 health and safety protocols and it looks like he won’t be available to return to the lineup again, leaving him out for tonight’s matchup in Phoenix.

The Knicks Wall’s exclusive partnership with PrizePicks presents the picks of the night. Tonight, we’re sticking with the en fuego RJ Barrett, who has a projected combined 32.5 points, rebounds, and assists. We’re going “over” on that projection. As for the Suns, we’re picking “over” on wing Mikal Bridges’ projected 23.5 points, rebounds, and assists combo.

The Knicks will be without Quentin Grimes due to a right patella subluxation; Kemba Walker and Derrick Rose are also unavailable tonight.

Obi Toppin is a late addition to the injury report with a strained left hamstring. He’s questionable.

The Suns will be without Chris Paul due to a right thumb fracture; Devin Booker’s is also out as he was placed in COVID protocols on Wednesday. Frank Kaminsky (knee) and Dario Saric (ACL tear) are also unavailable for Phoenix tonight.

You can catch tonight’s game on ESPN, along with MSG Network and Bally Sports Arizona, at 10 p.m. ET.