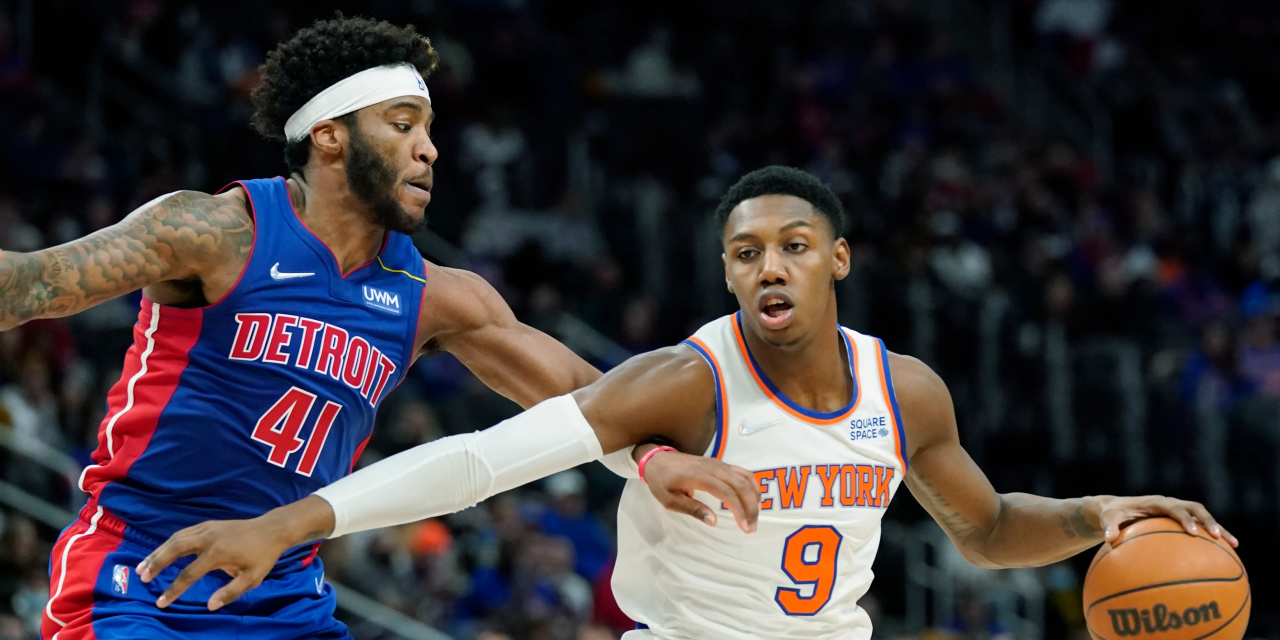 After beating two tougher opponents on the road, the Knicks close out their trip against the tanking Pistons with some fun, young talent.

Play-in spot hopes may be fading away, as the regular season continues to wind down. The New York Knicks (32-42) are still five games behind the Atlanta Hawks for the last spot, and there doesn’t seem to be enough time to play catch-up.

Despite this, you can’t say the Knicks have given up. Even with Julius Randle out, other players have stepped up and New York enters Sunday afternoon’s road matchup with the Detroit Pistons (20-54) with back-to-back wins.

The Knicks recently picked up back-to-back wins over Charlotte and Miami.

Meanwhile, Detroit is near the bottom of the Eastern Conference. The Pistons lost a close 100-97 game to Washington on Friday night, and they have lost seven of their last nine games.

Tip-off is scheduled for Sunday at 3:30 p.m. ET. from Little Caesars Arena, airing on MSG Network and Bally Sports Detroit.

Putting the Pistons in their place

Although the Knicks have struggled with consistency this season, one thing has been certain: its ability to defeat Detroit. New York won both meetings against the Pistons this season, beating them twice—eight days apart—back in December.

Overall, the Knicks have dominated the season series in recent years. They have won each of the last seven meetings with Detroit and haven’t lost a game to the Pistons since November 6th, 2019.

Unfortunately for Detroit, if it wants to break that streak, it will have to do so without leading scorer Jerami Grant, who is out with a calf injury, and Hamidou Diallo, who might not be the Pistons’ top weapon, but he did gash the Knicks for 31 points and 13 rebounds on an efficient 13-of-19 shooting clip.

With those two key players out, it looks like Detroit will have to rally behind Cade Cunningham, who missed one game against the Knicks and didn’t do so well in the other, scoring just seven points on 2-of-13 shooting, but had nine assists. He is the next highest scorer after Grant, averaging 17.1 points per game.

The other notable threat is Saddiq Bey, who has been Detroit’s top performer in its two games against New York. He averages 16.3 points and 5.7 rebounds, but when he gets going from long range, he’s dangerous. In their last meeting, Bey put up 32 points and drilled six three-pointers in the loss to the Knicks.

Tom Thibodeau has been set in his ways all season, but with Julius Randle missing the previous couple of games, on top of other injuries on the roster, he’s been forced to do what fans have clamored for all season: play the younger guys more.

RJ Barrett has continued to impress, but it’s guys like Obi Toppin, Miles McBride, Immanuel Quickley, and Quentin Grimes that have been relishing the opportunity to play with more minutes.

At this point of the season, with playoff hopes fading away, it’s important to see these players get more chances for their development. Hopefully, they’ll continue to play well in Sunday’s game.

Toppin has performed well in each of the last three games in place of Julius Randle, shooting efficiently, while knocking down the three-ball. During this stretch, he’s averaging 14.3 points while shooting 67.9% on the floor. He’s also averaging 8.7 boards and 3.0 assists.

Quickley got it going off the bench and finished with a game-high 23 points against Miami. McBride and Grimes, while they’ve only gotten about 12-to-15 minutes to play in the last couple of games, they’ve made the most of that.

McBride hasn’t logged a single turnover in the last couple of weeks while helping on both ends of the court. Grimes hit a few threes against Miami and helped spark a big Knick run that was mostly led by the second unit.

More minutes for the younger players, and hopefully it continues to bode well for them moving forward.

Quentin Grimes is a late scratch for today’s game, the team announced, sidelined with a sore right knee.