Knicks Look to Tame the Bulls at The Garden 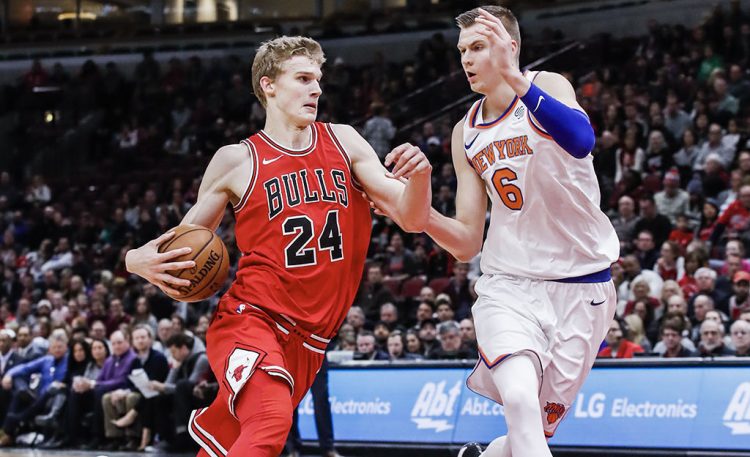 The Knicks are back at home on Wednesday night to take on the Chicago Bulls after getting hit hard on the road last week.

Madison Square Garden has never looked friendlier. Following a rough week (1-3, 1-2 on the road), the Knicks look to get back on track against a familiar foe. The Bulls have been a thorn in the side of New York this season. Despite having a fully loaded roster, they have managed to beat the Knicks in their first two meeting of the season.

The good news is the first two meeting were also in Chicago. One of the key traits of this year’s Knicks squad is that they are considerably worse on the road. Despite taking the L twice, both contests were well within the Knicks’ grasp. What do they have to do to secure an important win? I’m glad you asked. Let’s take a peek at what to watch for in tonight’s matchup.

Get It Going Early

As mentioned in the Mavs recap, the first quarter means a lot for the Knicks. It’s their thermometer for the day. If they come out sluggish and trail after one, they are likely en route to defeat. That’s why coming out strong should be a daily goal in the pregame locker room. They jumped out to a strong start in Dallas, and the result was a crucial road win.

The key players in that early start were Jarrett Jack and Enes Kanter. Jack put pressure on the defense while Enes simply bullied down low. Their aggression forced the defense to worry about them instead of zoning in on Kristaps Porzingis from the jump. Because of that, KP eased into the flow of the game, which suits him better than attempting to force the action.

While the whole league is zigging, Jeff Hornacek’s lineup choices have been zagging. The traffic jam in the frontcourt has been an ongoing saga. The questions of who will be traded, whose minutes will get affected, who plays best next to KP; it all means nothing. Hornacek has decided that if teams want to go small, he will go big and punish them with brute force.

That seems to be the reason we saw Willy Hernangómez grab some first half minutes against the Mavs. The absence of Michael Beasley made this an easier call, but Hornacek hinted at this being a new strategy when he spoke with reporters after Sunday’s win:

“We have to figure out if going small against these teams is to our benefit or just powerball it,’’ Hornacek said. “Willy got in there. Our centers, Enes, KO provided 21 points and 28 rebounds. We have to look at that as we move forward. If we don’t go small, just bullyball it.’’

You have my attention coach. This is a great development given the talent being wasted on the bench. Big things were expected from Willy this season, so any chance for him to get in the action is a massive win. Having it not affect O’Quinn or Kanter’s minutes is just icing on the cake. In case this wasn’t obvious, Willy is a fan of this strategy:

“It would be more of a chance for me to play. I think sometimes we have to use our advantage. We have a lot of big guys — KO, Enes, KP and me. We could use our height instead of going small against a small team. I think it’s a great idea. Hopefully we can do it.”

With that in mind, it will be worth keeping tabs on the rotation tonight. Willy’s defense is his biggest issue, so will Hornacek trust him to meander on the perimeter with Nikola Mirotic and Lauri Markkanen? If he gives Willy the opportunity and he succeeds, this could open up a whole new dimension of lineups, and new Knicks Film School videos I cannot wait to digest.

Matchup of the Night: Kristaps Porzingis vs. Lauri Markkanen

Last game, Porzingis faced his future. Tonight, he faces his past. Is Lauri Markkanen really as good, or even better than KP was his rookie year? Perhaps. If Markkanen can keep his current pace, an argument certainly be made. Markkanen is actually more efficient in his offense, but Porzingis is by far the superior defender. The rookie is slightly better on the boards as well. You can credit that to his strength, which KP believes is already ahead of him when he was a rookie.

In the head-to-head matchup, the youngster has a 2-0 lead. They are their own men, but let’s keep it real: they’ll always be compared. Porzingis is a competitive guy, so he can’t surrender a third straight loss at his house. If he plays his game, there is no reason why he shouldn’t school Chicago’s prized rook.

The key is really Porzingis. If he comes out and forces his offense, he’ll still get his 20 or 25. He’s evolved to a good enough scorer to hit that threshold no matter what. Now he’s moved up to the next phase of becoming a prolific scorer: efficiency.

Efficiency is a department KP struggled with in his first two games against the Bulls. He scored 23 points twice, but shot 40 percent and 40.9 percent, respectively. A large chunk of those misses came from three where he shot 2-13 combined. If Porzingis comes out aggressive down low and can ease into his offense, similar to last game, he can easily have a good night. He can also force up jumpers and crawl to 20 points. It’s really up to him. The challenge of Markkanen should be the perfect catalyst for a strong night.

Also, he knows someone special will be watching.