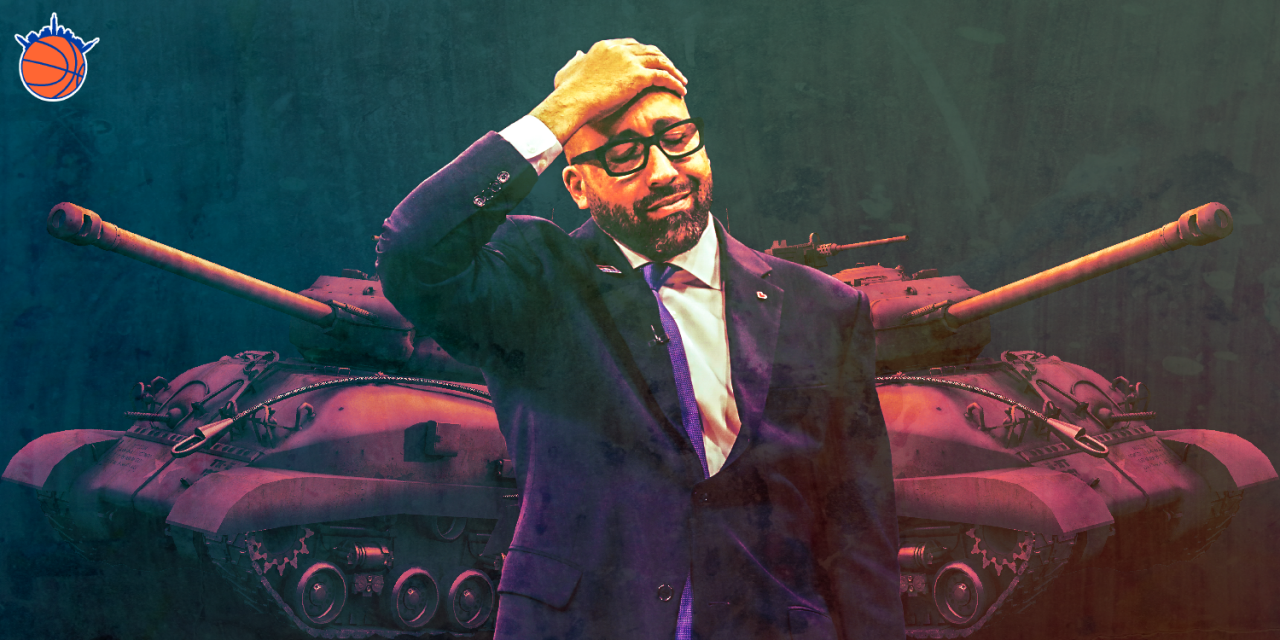 Bottoming out in 2019 wasn’t explicitly the goal for the New York Knicks, but nevertheless, they’re here. Did they plan to tank all along, and who’s culpable?

The All-Star break is over, and the New York Knicks have come crashing down to reality. Although New York ended the first half of the season on a positive note, snapping an 18-game losing streak, one win doesn’t negate the plentiful amount of losses it has tallied up this season. Since January 1st, New York is 2-19.

Here at The Knicks Wall, more commonly known as The First Church of Zion, we couldn’t be more pleased. However, the Knicks are tanking just a little too well this season.

It’s a tank job so horrendous, it’s embarrassing—and possibly counter-productive to the Knicks’ future. It leaves a bad taste in your mouth, and blame for the Knicks’ beyond abysmal efforts this year has to be cast somewhere. So, whodunit?

For the record, my vote goes to Joakim Noah in the locker room with the rusty jump shot, but I’d be doing a disservice if I didn’t acknowledge the entire roster’s hand in the Knicks’ losses. As a team, the Knicks rank last in field-goal percentage and assists, fourth to last in field goals made and three-point percentage, and in the bottom five in points per game (per NBA Stats).

Not a single player on the Knicks’ roster has averaged 20 points for a season in their career. These are not the nitty-gritty Los Angeles Clippers. These are men with one foot in the league. The neophytes (Kevin Knox, Allonzo Trier, Mitchell Robinson, Frank Ntilikina, Damyean Dotson, and Dennis Smith Jr.) are arriving while Mario Hezonja, Noah Vonleh, Trey Burke, and Emmanuel Mudiay were on their way out. Neither group has a dependable name on it. You get what you pay for, and there’s little to no evidence to suggest any of the aforementioned players are worth a damn at the moment.

So, when it comes to the tank, the players are (begrudgingly) absolved. They’re definitely the fingermen doing the dirty work, but they’re not the ones truly at fault for the Knicks’ god-awful season.

There’s an interesting case to be made that the Knicks’ woes should be placed almost solely on the shoulders of first-year New York head coach David Fizdale. Citing his history, it’s not a stretch. He had a successful first year as the head coach of the Memphis Grizzlies, but a first-round exit and a subsequent bad start to the season, coupled with a souring relationship between he and star big man Marc Gasol ended his tenure early. His record at the end of things was 51-50, giving him a win-percentage a hair above .500. Plus, after taking the big job in New York, Fizdale and Gasol reconciled.

Challenging Gasol to take more threes in his first season was a much-lauded Fizdale implementation in his first season. Gasol ended up shooting 38.8 percent on 3.6 three-point attempts per game in the 2016–17 season. Fizdale’s claim to fame is understanding the modern NBA offense. As an assistant on the championship Miami Heat teams, it would make sense since they were among the first to employ “small lineups” in a major way this decade, pushing Chris Bosh definitively from power forward to center on their LeBron James–led teams.

Fizdale had the resume to get the main job, but does that make this tank job his M.O.? One rumored gripe about Fizdale is that his rotations can be head-scratchingly bad.

Knicks fans surely can understand the sentiment, given that Fizdale has gone in favor of the fourth-year guard Mudiay instead of Ntilikina for the majority of the season. Mudiay has played 1,082 minutes this season, while Ntilikina has only tallied 872. That’s even fewer than Mario Hezonja.

Plus, Fizdale chose to go the distance with Mudiay over incumbent starting point guard Dennis Smith Jr. on Mudiay’s first night back from an injury. Mudiay shot 6-of-16, made one assist, and four turnovers in 26 minutes, compared to Smith’s 3-of-6 shooting, seven assists, and five turnovers in 21 minutes. Neither was exceptional that night, but Fizdale needs to resolve the cognitive dissonance in shelving your best ball-moving guard for an iso-heavy scoring guard without many scoring chops. Fizdale’s done well to revitalize Mudiay’s career, but it stands to reason that his infatuation with Mud could be a detriment to the team.

The Knicks rank 27th in the NBA in both Offensive Rating and Defensive Rating. In terms of blaming someone for the horrendous-ness of the tank, Fizdale appears to be the culprit. Unfortunately, he’s not the mole jeopardizing the Knicks everyone thinks he is.

Somehow, it all comes back to Emmanuel Mudiay.

Mudiay was brought on because the Knicks desperately needed a point guard. If the Knicks didn’t want him, they wouldn’t have chosen him. At the time of the trade, Doug McDermott was an expiring contract. In all honesty, they should have ridden it out. Instead, they went after the guard on a rookie-scale contract and tasked Fizdale with rehabilitating his career.

It’s worked, and while it appears that Mudiay is nothing more than Fizdale parading around his accomplishment, the rest of the team appears to be balancing its minutes fine. The top five players in minutes per game this season, ranked, are Noah Vonleh, Tim Hardaway Jr., Kevin Knox, Damyean Dotson, and Allonzo Trier. Mitchell Robinson and Frank Ntilikina fall below, but given Robinson’s early penchant for foul trouble, it makes sense.

Furthermore, Ntilikina’s been so atrocious this season, he’s warranted several benchings. He’s averaging the same 5.9 points per game on a lower field-goal percentage, a lower three-point field goal percentage, fewer rebounds, and fewer assists than in his rookie season. He’s demonstrably worse in nearly every statistical category, and even his defense has slipped. When he returns to action from his groin injury, Frank may be the same mediocre player.

Furthermore, none of the players on the roster give you a win. The only current players on the roster with over 1.0 estimated Win Shares (WS) to their name are Robinson, Vonleh, and Dotson. Directly below at 1.0 and 0.9, respectively, are DeAndre Jordan and Mudiay. Knox’s current WS total is -1.1. It may appear that Fizdale’s love for Mudiay is a smoking gun, but in spite of everything, it’s not. It’s an alibi. An alibi to prove he’s been up to something this season, along with Vonleh.

To find the one pulling the strings, you need only look upward.

It was an inside job. The front office wants to blame anyone for the tank. If the Knicks’ front office decided on the current roster, why wouldn’t they be considered the ones ultimately at fault? Any team of people which consciously decides to employ Mario Hezonja and then decries a lack of competence are either feigning ignorance or are legitimately fools. And since Phil Jackson has already retreated to his peyote-laden cave in Montana, the most important case is for the former.


The front office of namely James Dolan, Steve Mills, and Scott Perry knew what they were getting into. Their All-Star was down-and-out for the season, and they needed to make the best of a bad situation. They started with a strong rookie class of Knox, Robinson, and Trier. In hindsight, it’s hard to say if they could have made better moves than those. Knox emerged with a strong workout and a similarly strong Summer League. Robinson and Trier were absolute steals—fantastic moves. Their on-court contributions this first season speak for themselves.

But the other moves—the free agent signings—are what sealed the deal for a lost season. We can be honest: the Knicks didn’t have much of a choice but to back up Hardaway with Burke, Hezonja, and Lance Thomas. It does not negate the fact that the Knicks went through with them and didn’t make trades to better the team. And why would they try to improve the roster? They have as good a shot at the number-one overall lottery pick as any other team this year. Trying not to tank would be foolish—there’s your motive.

Did it just so happen that the Knicks tanked harder than they had hoped? Phil Jackson hamstrung the team with the contract of Joakim Noah, and Steve Mills tried to one-up his ex-boss on being an awful GM when he gave Tim Hardaway Jr. the GDP of a city-state. Either way, the Knicks took the bad decisions and leaned into them.

The front office consciously drove the team into the ground. Hezonja, Burke, Vonleh, Enes Kanter, Lance Thomas, Ron Baker, Luke Kornet, and Jordan are all in the final year of their contracts. The Knicks are terrible by design; the 2018–19 New York Knickerbockers roster was created to be destroyed. Arguing about the severity of the transgression, “tanking,” is a formality.

New York as a collective of individuals in the front office conspired to make the Knicks as awful as possible in the hopes of (at the beginning of the season) pursuing Zion Williamson and (by the end of the trade deadline) pursuing Kevin Durant—because nothing screams tanking louder than trading the only All-Star you drafted for peanuts.

Technically, all parties involved had a hand in the tank. The players carried it out, Fizdale managed it, and the front office produced it.

In a twisted way, the Knicks tanked because they cared. New York had neither Porzingis’ confidence nor a clear path to contention. There hasn’t been a successful New York rebuild in ages. It wouldn’t be an affront to anyone’s experience to suggest the front office may not know how to rebuild. So they gave it their best shot—by doing away with Porzingis and bad contracts, they killed two birds with one stone.

Let’s just hope that crime pays this time around.