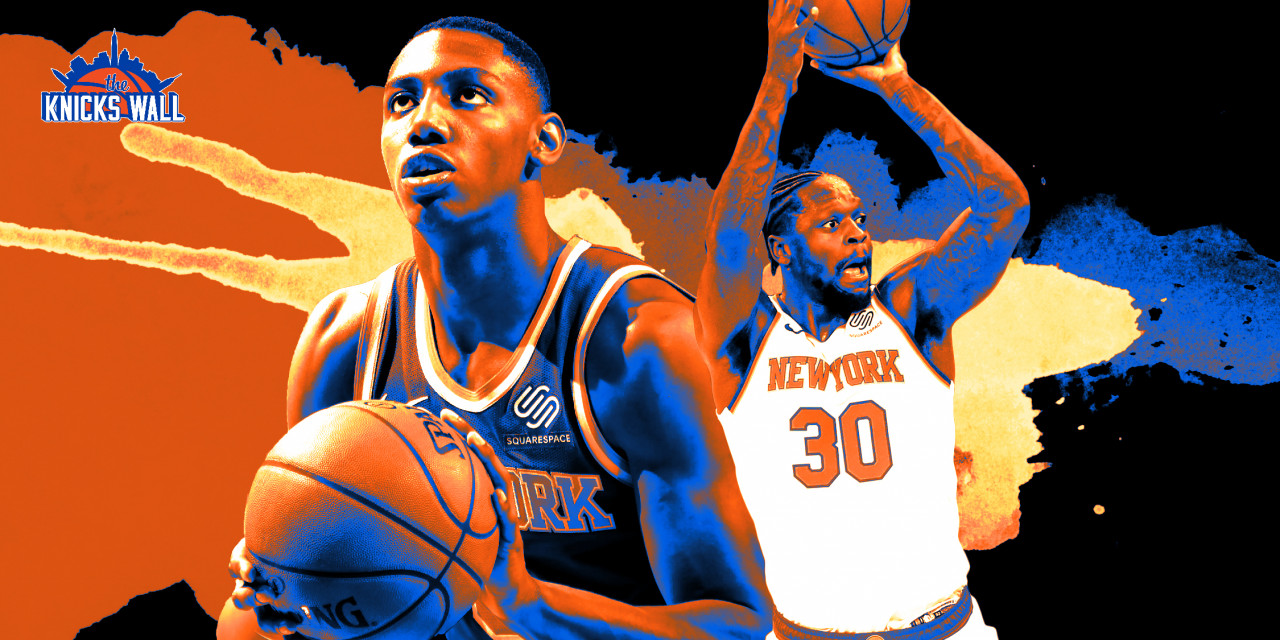 Last season, the Knicks’ deep-range shooting was one of the team’s biggest strengths. This year, it should be even better.

In case you missed it, the New York Knicks were one of the NBA’s most accurate three-point shooting teams last season.

Of the many surprising aspects of the Knicks’ first season under Tom Thibodeau—including the whole shebang—their deftness from downtown ranks right at the top of the list.

Historically, Thibodeau-coached Teams had not exactly lit it up from beyond the arc. They adequately created corner looks at low volume, but here’s where his groups in Chicago and Minnesota finished in three-point percentage, attempts, and makes per game.

As you’ll notice: there’s one single digit in there, and a lot of figures in the 20s.

In terms of quantity, the Knicks were par for the course, not taking too many long-range shots per game. The quality, however, stands out. New York’s efficiency only improved as the season wore on. Undoubtedly, their outside shooting proficiency was an essential component of their Cinderella-ish run to the East’s no. 4 seed.

The success of the 2020–21 season also represented a dramatic upgrade from prior Knicks seasons. New York finished last in attempts, 29th in makes, and 27th in percentage the year before. In 2018–19, they were bottom 10 in all three metrics.

Now here’s the good news: the 2021–22 squad should be even deadlier from deep. They may not be able to sustain their red hot catch-and-shoot percentage from the homestretch of last season, but the latest iteration of the Knicks should collectively offer a more voluminous and diverse three-point attack.

Reason no. 1: the incumbents.

A substantial factor in their success from downtown last season was the accuracy of R.J. Barrett, Julius Randle, and Derrick Rose.

Frankly, Rose and Randle are candidates for regression. After making just 29.5% on 1.5 attempts per game through the first five full seasons of his career, Randle suddenly drained 41.1% on 5.5 attempts on his way to Most Improved Player of the Year and All-NBA honors (he was 11-of-33 in the playoffs).

Objectively, that sort of uptick is extremely rare. On the other hand, Randle dutifully worked on his craft throughout the prior (nine-month) offseason, calling himself “obsessive” about honing his stroke. “I’m just confident because I put the work in. I know how hard I worked this summer on trying to improve as a shooter. Honestly, I’m not really surprised,” he told NorthJersey’s Chris Iseman.

Thibodeau emphasized the importance of three-point shooting to the Knicks. As Mike Vorkunov of The Athletic reported, Thibs worked with the Knicks’ analytics department to encourage players to seek “hot spots” where they could find space to shoot. Those areas tend to be farther out, so Thibodeau installed a “four-point” line in practices.

It worked. Six Knicks players shot over 40% on threes, most of whom are on the team in 2020–21. The two players that won’t be returning are Reggie Bullock, who was replaced in free agency with another efficient three-point marksman, and Frank Ntilikina, who was deep on the bench.

Rose, too, may regress a bit after making 41.1% of his triples in 35 games with the Knicks—up 10% from his career average and 11% from the year before. If your glass is half-full, you’ll point to the fact that he hit 37% of threes in 51 games for the Timberwolves in 2018–19 and seemed genuinely confident in his shot last season. His game always seems to settle into place under Thibodeau.

Barrett will progress. Beyond the nonstop praise he receives for his dedication, Barrett has steadily improved every aspect of his game through his first two seasons—you know, as 20-year-old no. 3 overall picks are expected to.

Barrett picked up his three-point shooting by 8.0% from year one to year two, and he was especially effective from the corner. One factor: his shooting coach, the esteemed Drew Hanlen, distanced Barrett from the instructions of the Knicks’ previous coaching staff, and Thibodeau let the duo work in peace in Florida during the extended hiatus. After a rocky first few months of last season, their training paid dividends.

Furthermore, the Knicks smartly retained Alec Burks, who hit 41.5% on 5.0 threes per game in 2020–21, often in clutch situations. Fortunately, he should be able to play more of a spot-up shooter, rather than shot-creator, role on this year’s squad, as TKW’s Dylan Burd broke down.

Immanuel Quickley was considered a microwave coming out of Kentucky and he validated that reputation as a rookie. He made nearly 39% of his long-distance looks. More importantly, he (usually) wasn’t afraid to let it fly, taking 8.8 attempts per 36 minutes, including nine games in which he attempted eight or more triples. The 22-year-old is already an above-average NBA three-point shooter, and will surely see his minutes, touches, and responsibilities increase as a sophomore.

The same goes for Obi Toppin, who generally struggled with his J (and everything else) in year one. Toppin made 26-of-85 threes, though he found a bit of rhythm in the postseason which he seems to have carried over to Summer League. In his case, there’s nowhere to go but up.

I cannot emphasize enough how important this shot can become for Obi pic.twitter.com/cv7usLW8sY

In terms of shooting, the Knicks’ summer moves should ultimately be a net gain.

Bullock, now on the Dallas Mavericks, was arguably the team’s best pure-shooter last season, but Evan Fournier is respectable, albeit pricy. The $72 million man has shot 37.9% from deep since entering the league, and set career-highs in percentage (41.3%) and attempts (6.7) in 2020–21. Fournier has consistently upped his output every season, and one would imagine the Knicks want to see that trend continue.

Kemba Walker was unreliable from outside in his salad days as a Charlotte Hornet, but the point guard has steadied out since then. Walker has shot 37.5% from three since 2015–16 and has attempted over 8.0 per game in each of the past three campaigns. He’s no Steph Curry, but, in comparison to Elfrid Payton—a nonfactor who shot 42-of-167 (25.1%) across 108 unpleasant outings in New York—he kinda is.

The Elf-to-Kemba upgrade alone should vault the Knicks up in the three-point ranks. Plus, even if Barrett makes all-around strides, Walker’s ability to create his own shots should enable Barrett to enjoy even more off-ball uncontested looks—where he truly thrives.

In general, one avenue for the Knicks to up their volume is via more off-the-dribble looks (they were 24th in 2020–21). Last season, Quickley led the Knicks in pull-up three-point attempts (2.8), and he should add more nuance to his game. Quickley, Toppin, Barrett, along with Fournier and Walker (both pull-up frequenters), and the two rookies, Quentin Grimes and Miles McBride, will help in that department.

Speaking of those rookies, the most dramatic boost to the Knicks’ perimeter prowess this season may result from Grimes and McBride.

Grimes, who led Houston to the Final Four last season, was simply one of the premier snipers in the 2021 NBA Draft, and his improvement was telling. He shot 32.6% from deep as a sophomore, then upped that to 40.3% as a junior on 8.2 attempts per game. The Knicks need that type of volume from Grimes. “I’ll have an immediate impact with the Knicks with my shooting ability,” Grimes told the New York Post.

Following a frigid start in the Las Vegas heat, Grimes drained 15 triples over the final three games of Summer League, including in 28- and 26-point outings. He shot 40.7% overall from three in the desert.

Quentin Grimes has such a quick trigger. It’s BEAUTIFUL. pic.twitter.com/OJYmdtxI4o

The Knicks’ other prized neophyte, Deuce McBride, hit 50% of his triples at the Thomas and Mack Center. As a sophomore last season at West Virginia, he made 41.4% of his three and hit over 81% of his free throws—always a solid indicator of next-level shooting accuracy.

Even if his three-point shooting doesn’t immediately translate to the NBA level, McBride’s mid-range shot has been honed throughout his life. He’s got the fundamentals down, and his year-to-year improvement at West Virginia indicates a promising learning curve.

The Knicks may not top their three-point percentage from last season, but they’re almost certainly going to have more perimeter firepower on the court at all times. In my opinion, there’s every reason to expect more threes getting fired, and, as a result, more BANGS. Perhaps that’s as good of a reason as any to be optimistic about a second-year under Thibodeau—especially for those who fear the first may have been a fluke.