Knicks Three-Point Woes: Will They Catch Up With the Rest of the NBA Soon? 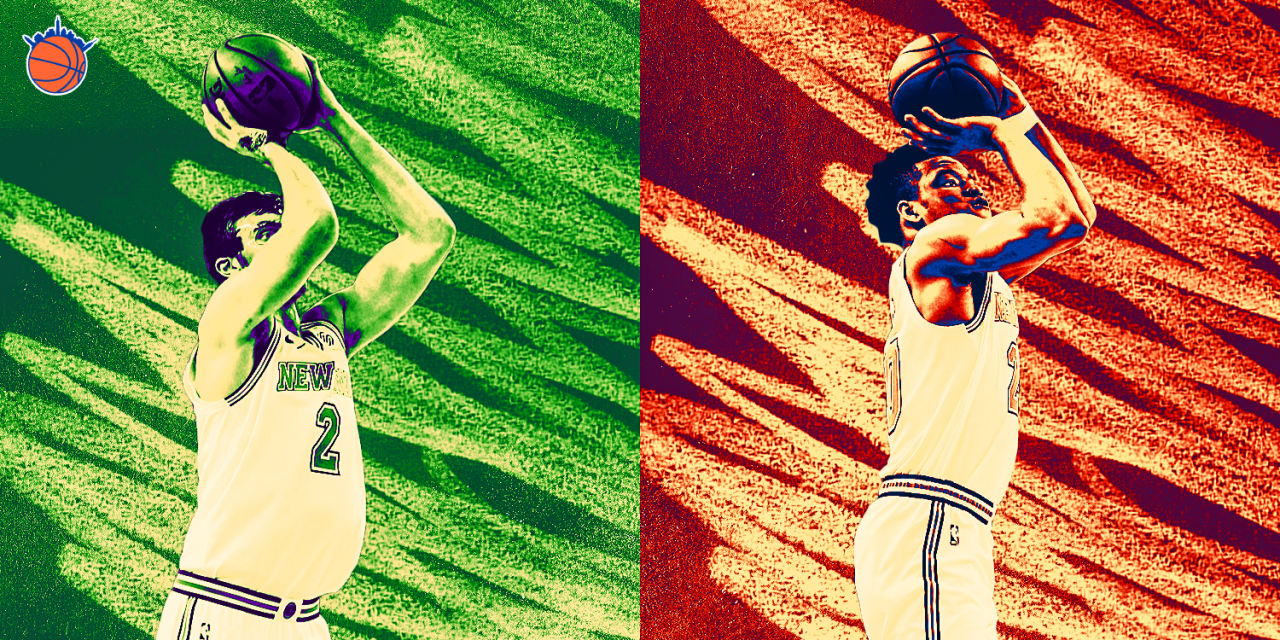 New York has struggled from behind the arc all season. It’s time the Knicks address the issue if they want to compete sooner or later.

The NBA has evolved into a perimeter-centric league that favors teams and players shooting the three-pointer with consistency. The days of scoring 95 points and winning consistently are gone, as the league has become geared towards volume scoring and high-octane offense, leading to outputs upwards of 130 points on any given night.

Traditional centers and a rugged style of play have become largely obsolete in favor of more finesse, marksman-like shooters and a run-and-gun pace. Teams have been forced to reconstruct their rosters to keep up with the current NBA style, and those who fail to adapt effectively have been left in the dust and find themselves non-competitive.

The Knicks have failed add talented shooters to their roster. New York ranks 27th in the NBA in three-point percentage (33.7 percent) and 24th in three-pointers made per game (9.9), and find themselves in the basement of the standings at 10-43. Too often this season the Knicks have gone on long cold spells from behind the arc, which has resulted in lost leads and the inability to claw their way back from deficits. These issues stem from their inability to hit timely perimeter shots due to lack of talent.

It is safe to say that if the Knicks want to be any semblance of competitive next season, they must make shooting a priority in the draft as well as free agency. Steve Mills, Scott Perry, David Fizdale, and company need to conduct an in-depth roster analysis on current players to determine who are the effective shooting pieces going forward.

Steph Curry, the face of the three-ball in today’s NBA, is responsible for spearheading increased emphasis on shooting from behind the arc. Curry and the Warriors dynasty have used the three to become one of the greatest offensive juggernauts ever seen en route to multiple NBA titles. Although Golden State does virtually everything well, shooting is their claim to fame, with Klay Thompson, Kevin Durant, DeMarcus Cousins, and even their resident enforcer, Draymond Green, capable of hitting long jumpers.

Golden State has laid out the blueprint for how to win currently in the Association—and many teams have attempted to mimic how the Warriors have built their roster as well as their rapid pace of play.

The Houston Rockets have been wildly successful, breaking several three-point records of the past few seasons—including the record for most three-point makes in a single game (26) back on December 18th—by loading up their roster with accurate shooters. James Harden, Eric Gordon, and squad came within one game of taking down the Warriors last year, and Houston added even more shooting in the offseason. Other teams that have had success with the triple are the Milwaukee Bucks and the Denver Nuggets, sitting at or near the top of their respective conferences and find themselves in the top-half of the league in three-pointers made per game.

Even the Brooklyn Nets, who have no stars on their team and were once the laughing stock of the league, now shoot well from deep and find themselves in the thick of the Eastern Conference playoff race.

The Knicks did themselves no favors in the perimeter shooting department following their recent blockbuster trade by shipping away Kristaps Porzingis and Tim Hardaway Jr. They were projected to be two of their most lethal three-point shooting threats going into next year, but instead they were exchanged for DeAndre Jordan, who can’t shoot, Dennis Smith Jr., who has struggled mightily from the perimeter, and Wesley Matthews, a good shooter, but likely to be bought out, per Marc Berman of the NY Post.

There are three guys on the current roster who could potentially play an important shooting role going forward: Kevin Knox, Allonzo Trier, and Damyean Dotson. Not to say that the other guy won’t be as important, but these are three to look out for to lead the charge from the perimeter next season.

Knox, who will replace Lonzo Ball at the Rising Stars Challenge, has taken leaps and bounds forward and looks more comfortable launching threes than he did at the beginning of the season. He’s not a pure shooter by any stretch, but he has come a long way from looking hesitant in October and November. He is now much more confident and willing to take his shots. Although Knox’s percentages from three have been up and down month-to-month, the 19-year-old has very smooth mechanics on his jump shot, which gives him a good chance to improve. He might even become elite from behind the arc—especially under the tutelage of Coach Fizdale, known for his player development.

Kevin Knox ties the game with the HUGE 3-pointer: pic.twitter.com/LKkgTKmxbk

Trier he was not expected to contribute at all this season, but has been a nice surprise, providing instant offense and proving to be a threat from the perimeter. Trier has shot 37.2 percent from three and looks to be a keeper of an undrafted free agent flyer going forward, whether he is a key reserve or potentially a starter. The rookie wasn’t known for his long-range shooting coming out of college but has done a decent job overall. More importantly, he’s demonstrated an ability to hit clutch threes.

Dotson is probably the purest shooter of the aforementioned trio, potentially serving a Danny Green type role for the Knicks going forward. Dame Dot possesses excellent length for a wing player and has shown flashes of shooting brilliance throughout his sophomore campaign. Dotson has upped his three-point percentage from 32 percent to 38 percent and is on track to maybe reach the 40 percent mark, which would be a huge boost for the Knicks.

Another aspect of the Knicks’ whole rebuild and desire to build a shooting powerhouse that shouldn’t be overlooked is David Fizdale. Fizdale is known for his fast-paced, shooter friendly system, and that should bode well in the Knicks’ quest to become a better shooting team. Fiz seems like the perfect coach for the direction of the franchise. Fit in the NBA does matter, and Fiz’s system is modern enough, and conducive to how the Knicks will look to play going forward

Free Agents and the Draft

With sizable cap space and a projected top-five draft pick, there’s no reason why New York shouldn’t be able to construct an elite roster with shooters going forward. All of the prime free agents to whom the Knicks have been linked are excellent shooters, and the likelihood that one of the big names lands in the Mecca looks more and more promising.

As for the draft, there will be an elite-level prospect for the taking in a couple months, and it is important for the Knicks to make a wise decision with that selection. Building through the draft is still extraordinarily important, and it would behoove the Knicks to select someone who is capable of shooting, in case they miss out on guys like Kevin Durant, Kyrie Irving, or Kemba Walker during the free-agent frenzy.

It’s clear that three-point shooting is a prerequisite for winning in today’s NBA, so will the Knicks build their roster around omnipresent perimeter threats?