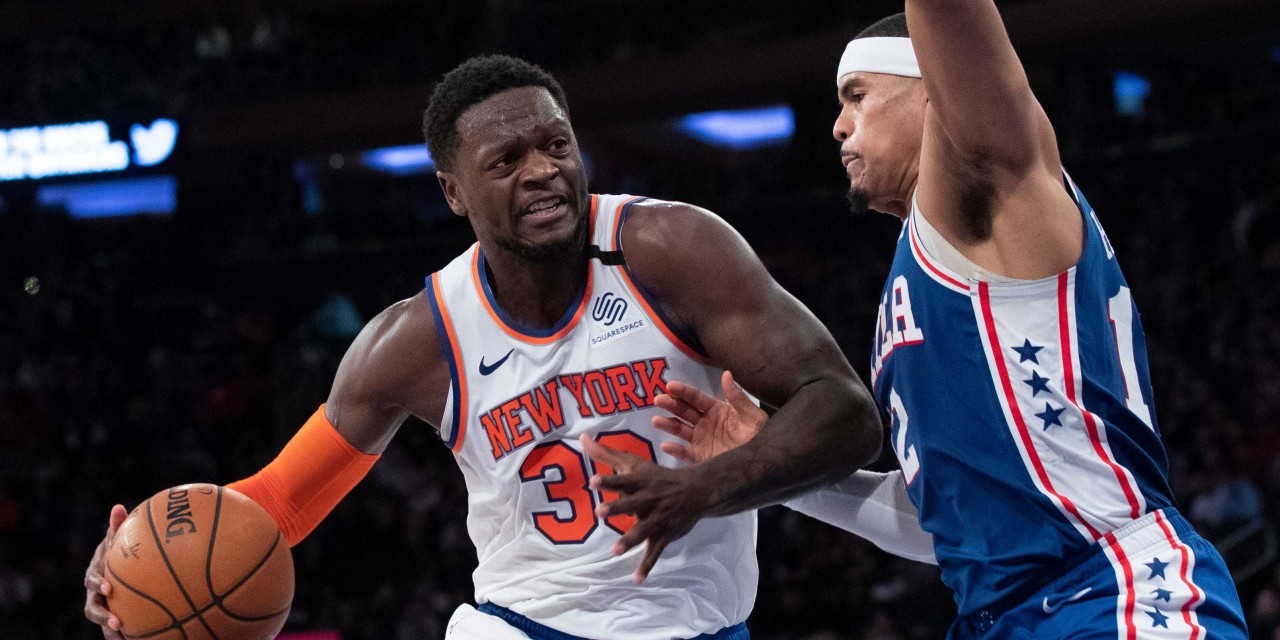 Despite a go-ahead jumper from Marcus Morris to put the Knicks up with 43 seconds left, New York fell to the Sixers for the 11th consecutive time.

Once again, the Knicks kept it close with the title-contending Sixers, although tonight New York was aided by Joel Embiid’s absence due to injury. The Knicks lost their first two matchups by 11 combined points.

The first quarter was tightly competitive. Each team made their first three shots; there were nine lead changes and the Sixers led by only three points at the quarter’s end.

The Sixers pushed the lead to as much as 10 points in the second quarter. A 15-5 mid-quarter run from New York tied the game, with Taj Gibson recorded seven points alone, taking it right to Al Horford on the inside.

Taj Gibson is in his BAG and Al Horford is in the BLENDER 🌪 pic.twitter.com/sI6Hwyt3GP

New York was able to keep the Sixers in striking distance throughout the second half. They entered the fourth quarter only down by one point.

The Knicks kept the deficit in single digits the whole way. They found themselves down one point with 3:37 left to play and took the lead with 31 seconds left, but couldn’t hold on for the win.

The Knicks’ kryptonite was Ben Simmons. No one could keep him from driving into the paint. He had 16 points on 7-of-10 field goal shooting at halftime and ended the night with a game-high 21 points, eight assists, and seven rebounds.

The Knicks also struggled to contain Philadelphia’s fast break. The Sixers (chiefly Simmons) got up the court quickly, getting easy buckets time after time. Josh Richardson did some damage there, too, on his way to scoring 18 points on 7-of-15 shooting.

Philly’s defense also made New York sweat. Simmons and Richardson led the way. Rookies Matisse Thybulle and Norvel Pelle were disruptive as well. The Sixers forced the Knicks to shoot under 40% from the field.

Per usual, Marcus Morris and Julius Randle controlled the Knicks’ offense. With Tobias Harris, a weak defender, matched up with him, Randle looked to take advantage. Randle finished with 14 points (eight coming in the first quarter) and 12 rebounds on 5-for-13 shooting.

Morris was the Knicks’ go-to guy down the stretch and led the team in scoring with 20 points on 8-of-17 shooting.

The Knicks were without R.J. Barrett for the second time this season—this time due to a sprained ankle—but the rookie will be out for at least a week. Reggie Bullock replaced him in the starting lineup, joining Elfird Payton, Marcus Morris, Julius Randle, and Taj Gibson.

Nothing changed too drastically about how the Knicks played. They still ran most of their offense through Randle and Marcus Morris. Defensively, they could have used his help, though they didn’t fall off a cliff.

Although Headband Ro was out, Frank Ntilikina donned a headband for the first time this season.

Frank skips through the lane off the high screen from Mitch pic.twitter.com/KBoPr5u8FD

With 3:37 left to play, the Knicks found themselves down by just one. Here’s how the rest of the game went:

The Knicks are back in action Monday at 5:00 p.m. ET against the Cleveland Cavaliers.