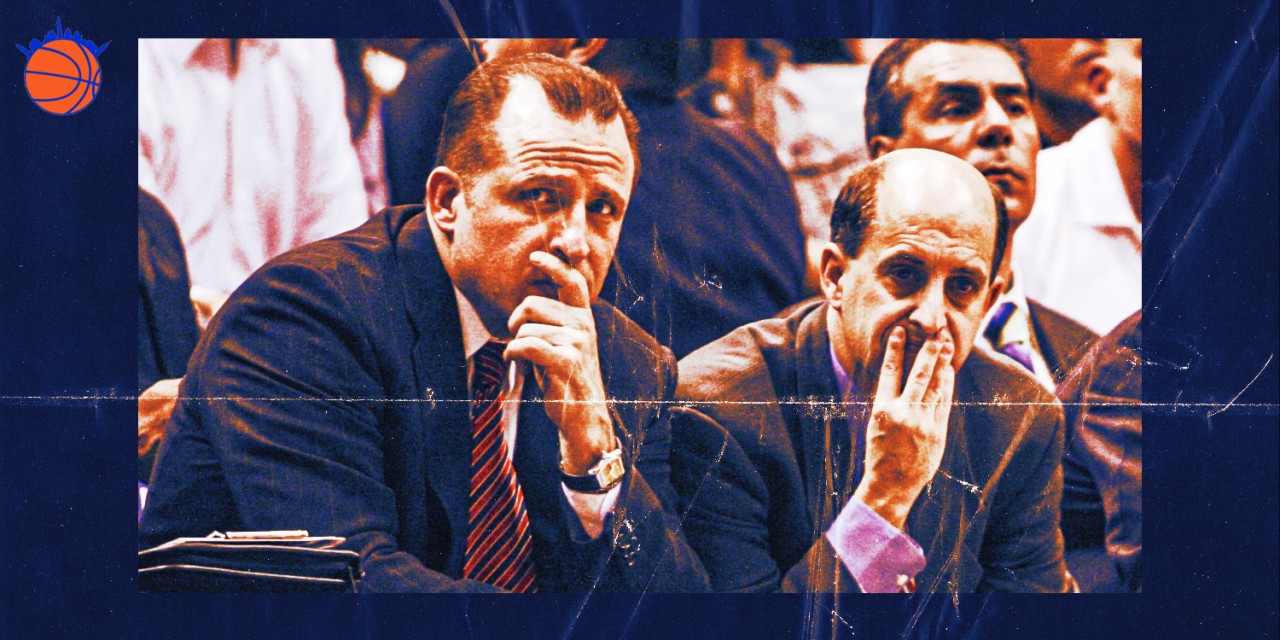 Besides his preexisting relationship with Leon Rose, new Knicks head coach Tom Thibodeau was once an upstart assistant for Jeff Van Gundy.

Thibodeau’s resume as head coach for the Chicago Bulls and Minnesota Timberwolves is well-documented: he accrued a 352-246 record, won Coach of the Year, and pushed the Bulls to the Eastern Conference Finals in 2011 while overseeing (and arguably hindering) the development of Derrick Rose, Joakim Noah, and Jimmy Butler. In Minnesota (as president, too) the T-Wolves made their first playoff berth in over a decade in 2018, only for the locker room to unravel the following season.

Before Chicago, Thibodeau was among the most esteemed assistant coaches in basketball, with a reputation as a defensive guru and film junkie. Of his many stops, his longest stint came in New York from 1996–2003—mostly working under his mentor, Jeff Van Gundy.

Thibodeau was hired by the Knicks in July 1996. Learning from Van Gundy—who immediately prioritized defense upon replacing Don Nelson in 1995–96—Thibodeau helped orchestrate one of the stingiest defenses in basketball that embodied his rugged, old-school approach. No matter who was on the court, they remained staunch, relying on execution and brute force over athleticism and turnover creation.

From 1997–2001—the five full seasons in which Thibodeau and Van Gundy were on the Knicks bench—here’s where the team ranked in Defensive Rating, opponents points per game, and opposing field goal percentage:

The team had five different Win Shares leaders over those five seasons, yet the foundational defense kept them in contention. They never posted a Defensive Rating above 101.0, and in 2001, the Knicks set a then-record by holding 33 straight opponents under 100 points.

Thibodeau’s signature, yet demanding scheme—heavily influenced by Van Gundy—is predicated on aggressively overloading the strong side while weak side defenders hold down a semi-zone. That second part is key: it requires a high degree of execution and I.Q., which those veteran-heavy Knicks teams possessed. Typically, they aimed to limit drives to the middle and direct pick-and-rolls to the sideline—a staple of Thibodeau’s defenses. The Knicks would send a second big to snuff out ball handlers and utilized an exhausting “fully help and fully recover” blitzing style.

However, in that era, most teams, including the Knicks, were content to slow the game down, playing right into Thibodeau and Van Gundy’s hands. Against their two main rivals during that period, the Knicks were more successful against the plodding Miami Heat than the pass-heavy, sharpshooting Indiana Pacers. In today’s pace-and-space, motion-heavy NBA, the Knicks’ scheme would need a serious software update.

Their defensive discipline most notably paid dividends in the 1999 and 2000 playoffs. In the 1999 Finals run, the Knicks surrendered .406 field goal shooting (83.0 PPG) in 20 contests. In 2000, they stifled the explosive Raptors in the first round before eking out a seven-game dogfight against Miami—surrendering 81.3 points per game over the two rounds.

Over time, Thibodeau became Van Gundy’s lead assistant and mentee. “He shares the same defensive philosophies as his ex-boss. Nobody on the Knicks worked harder than Van Gundy, but Thibodeau nearly matched him,” wrote the New York Post.

It’s hard to quantify Thibodeau’s direct impact game-to-game, but Van Gundy’s praise indicates a major influence, and he had a strong hand in concocting game plans. “It would have been like having a coaching draft and someone with the talent of Anthony Davis going undrafted every year…That’s how good Tom was,” he said about Thibodeau. Van Gundy also called him the best coach on his those staffs, “myself included.” By 2001, Van Gundy was touting Thibodeau as a future head coach.

Plus, in Boston, he is largely credited as the architect of the Celtics championship-winning defense, including an effective scheme to fluster Kobe Bryant in the 2008 Finals. “I’ve been facing his defenses here for some time and they’re tough—very, very tough,” Bryant said during the series. “Every single team he’s been on has had great strategies and physical defenses.”

“That’s all Tom wants to do, every day—coach defense. He lives it, breathes it. He has an energy.” Doc Rivers said.

Thibodeau’s contributions as an assistant earned more publicity with the Celtics—in part because Van Gundy showered praises on him during national television broadcasts—but he evidently made a major impact while in New York.

Offensively, the Van Gundy squads ran a bruising, painfully slow offense; heavy on post-ups, mid-range looks, and isolations rather than motion and ball movement. The style was strategically initiated with the defense in mind: limit the total field-goal attempts in the game.

Perusing old clippings, Thibodeau also seemed to be the go-to guy for 1-on-1 offensive work. In 1997, Larry Johnson attributed a hot stretch in which he scored double figures in nine of 10 games to Thibodeau’s work on his spot-up shooting. He also helped Marcus Camby develop on his low-post game, and worked on threes and post moves with Latrell Sprewell.

Perhaps the most obvious parallel between the Van Gundy Knicks and Thibodeau’s Bulls and Wolves is the lack of load management. Thibodeau adopted—or spiritually aligned with—Van Gundy’s every-game-matters mindset, heavily taxing his Bulls and Timberwolves starters during the regular season.

Similarly, Van Gundy’s Knicks asked heavy minutes from their starters and no days off—which may have contributed to underwhelming playoff performances in 1997, 1998, and 2001, as well as a lethargic late-season swoon that cost them home-court advantage in the 2000 Conference Finals. (In 1999, they benefited from a strike-shortened season.)

Even during his seven stints as the Knicks’ summer league coach, Thibodeau ran notoriously tough, marathon practices. His other mentor, Bill Musselman, is one of the most intense coaches in hoops history.

Fortunately, Thibodeau insists he’s eased up. “There’s situations in which your young guys are practicing a little bit more and your older vets are doing less and you’re separating the two…utilizing all the resources that you now have…has become critical. I think player care, player wellness, those things are prioritized…what does it take to be successful in the playoffs?” he recently said.

Van Gundy resigned during the 2001–02 season. After his departure, Thibodeau was passed over, as the team instead promoted assistant Don Chaney. During the disastrous 2002–03 campaign, many expected him to replace Chaney. It never happened, despite the fact that the Knicks blocked an opportunity for him to interview for possible head coaching job in Portland, indicating the value they placed on him (Dolan, miffed at Van Gundy, didn’t want to hire his protégé). However, there were worries that his demanding methods wouldn’t connect.

Van Gundy deserves most of the coaching credit for the success during Thibodeau’s first New York stint, and the team’s defensive performance noticeably declined after his resignation. When Chaney imparted a laid-back style, Thibodeau couldn’t motivate the group. (Of course, the talent declined, too). Here’s where they finished in Defensive Rating, opponent points per game, and opposing field goal percentage in his final two Knicks seasons:

Regardless how much credit Thibodeau truly deserves for the Knicks’ wins and losses, he undeniably played a key role in shaping the last extended run of New York success.

“Tom Thibodeau is a great coach,” Patrick Ewing told Newsday. “I had the opportunity to have him be on the staff when I played…he knows the game in and out.”

Of course, the Knicks team he’ll inherit in 2020—like the sport in general—is strikingly different than those of the 1990’s. Yes, they have a few proven above-average defenders and some veterans, but they’re severely unproven in terms of toughness and commitment to cohesive team defense.

However much of the turn of the century Knicks’ success can be attributed to Thibodeau, he did it working for Van Gundy, with experienced veterans, and during an era where his natural style were commonplace. Two decades later, he’ll face an entirely new challenge in his second go-round in the Big Apple.

»READ: How Tom Thibodeau would affect the Knicks’ young players

»READ: Would Frank Ntilikina see his confidence boosted by a Tom Thibodeau hire?